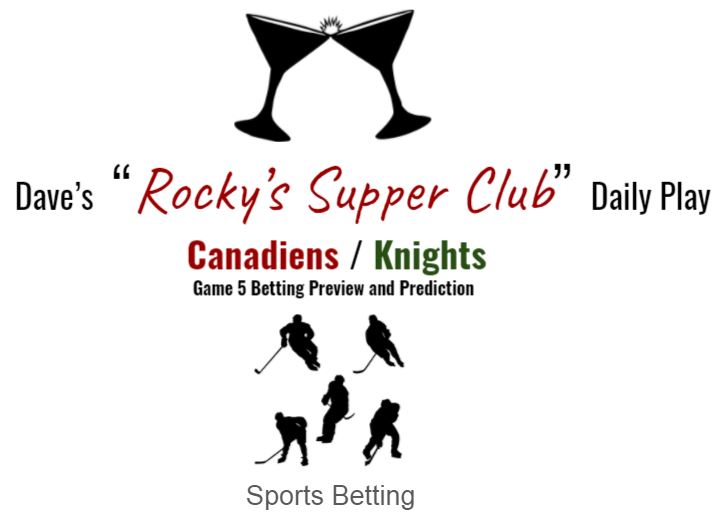 After narrowly avoiding defeat in Game 4 in Montreal, the Vegas Golden Knights return home to the T-Mobile Arena on Tuesday night with the series tied at 2 games apiece.

Vegas is one of the NHL’s best home teams posting a regular season record of 27-7-1-2, and winners of all but three contests in this postseason.

The Canadiens are a very good playoff road team however, beating the Maple Leafs three times at home in their 7 game series win, twice in Winnipeg in a sweep of the Jets, and already once in Vegas versus the Knights. Montreal should not be overlooked in this spot.

Montreal had won two in a row and was 4-0 in overtime playoff games before Sunday’s loss. The Canadiens dominated the action for the majority of the contest but could manage just the one goal on Lehner.

Tonight the Golden Knights are heavy favorites at (-250) as of this writing, while the Canadiens are big dogs at (+210). The OVER/UNDER goal total is set at a standard 5.5.

On the OVER/UNDER 5.5 total goals this evening is where I’m going to make my play. The trends for Vegas and Montreal lean heavily to this contest being a close game, and a lower scoring affair when you consider the UNDER is 2-0-3 in Canadiens last 5 overall, and is is 3-0-1 in Golden Knights last 4 after scoring 2 goals or less in their previous game.

It seems that Vegas has found out that Robin Lehner who stopped 27 of 28 shots in Game 4 is actually a good back-up to Fleury, which is good news. Fleury can’t play every minute of every game and expect to still be alive when the playoffs are done. If Lehner can be that guy again for the Golden Knights, and our trends on the totals hold, the play is simple.