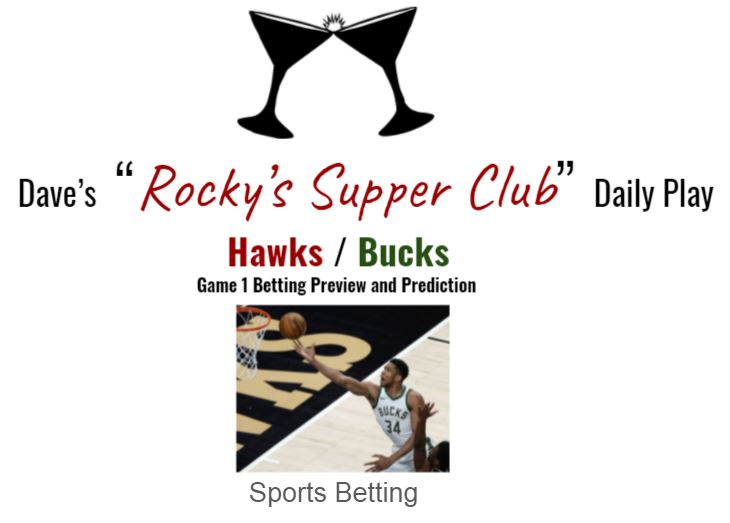 The Bucks host the Hawks Wednesday night for the opening game of the Eastern Conference Finals in the series we all expected. Milwaukee upset the Nets in overtime of Game 7 115-111 to advance while Atlanta also upset the 76ers on the road in Game 7 103-96.

The Eastern Conference Finals also include other storylines like the Bogdan Bogdanovic bowl, Mike Budenholzer’s return to Atlanta, and the Tony Snell revenge series.

It’s easy to forget that the Hawks are a top-10 scoring defense. So they aren’t just a doormat team for the Bucks to run through. Trae Young has been looking like the Eastern Conference’s version of Devin Booker throughout these playoffs. That’ll have to continue to be the case against a Bucks team that’s clearly the best two-way team left in the playoffs.

If the Hawks cover or win outright as road underdogs, their guards must make shots at a high level while Trae Young is the best player on the court. De’Andre Hunter (knee) will miss the rest of the season and undergo meniscus surgery. Cam Reddish (Achilles) missed the entire 76ers series but is questionable to play Wednesday while Kevin Huerter (ankle) is probable. Bogdan Bogdanovic (knee) will be a game-time decision.

If the Bucks win and cover as home favorites, they must limit the Hawks’ three-point shooting while Khris Middleton and Giannis Antetokounmpo play well. Defensively, the Bucks must limit the Hawks’ three-point shooting with their drop defense. They experimented with more frequent switching in the regular season than they had previously, and this may come in handy to prevent Young from turning the corner on screens to get in-rhythm pull-up threes or into the paint. The Bucks must also be aggressive on the boards and utilize their size advantage over the Hawks, and they can best take advantage by getting as many shots in the paint as possible.

For my Game 1 play, I’m sticking to something that has worked fairly well for me so far in this years’ postseason…playing the TOTAL. I know that both of these teams play above average defense, and both teams are likely going to be a bit gassed after their respective 7 games series.  The total of 226 feels a bit high for me tonight, so I’m making a play on the UNDER 226.

Considering some of the recent trends for both teams as well, the UNDER play looks really solid, and again, for my money, FEELS like the best way to bet tonight’s game: