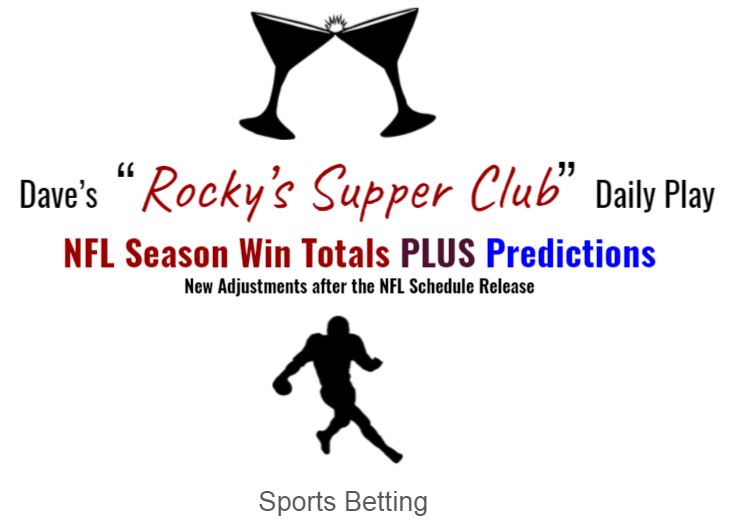 The NFL schedule release on Wednesday night brought all sorts of eye-balls to the TV, and all sorts of new speculation on how many games teams will win.

Today I’ll take a look at several marquee teams and tell you what I think about their season win total, either OVER or UNDER the mark set by the books.

*One caveat for Packers fans, the book makers have taken Green Bay OFF the board since the Aaron Rodgers fiasco has played out so publicly, but that won’t stop ME from telling you how many games I expect the Packers to win (IF) Rodgers is still on the team. If he’s not, get ready for Armageddon in Green Bay.*

The Bills are a legit Super Bowl contender, retained offensive coordinator Brian Daboll, and play in a division with three teams wobbly at QB. I have a play on the over. Coach Sean McDermott is 4-0 to the over as a head coach, and his Bills won nine of 10 last year to close out the regular season, the only loss coming on Kyler Murray’s “Hail Mary” touchdown pass.

Does Cam Newton start at QB, or will it be AJ McCarron 2.0 with Mac Jones? I have no read on this team. We’re talking about a brand new Patriots team with as many as nine new starters.

Difficult division with two new starters on the right side of Lamar Jackson’s offensive line, and their top two edge rushers are gone. Slight lean to the under, but not a wager for me. Before you run to fade Lamar Jackson, just remember that John Harbaugh is 8-4-1 in his career to the season win total over.

Jumped on this one as soon as it was released! Odell Beckham is healthy, the Browns have one of the best offensive lines in the NFL, and the defense leveled up in the secondary and on the line. Roster-wise, the Browns have a strong case for top five in the league. The biggest question is how Baker Mayfield handles success, and the burden of playing for a huge money second contract. Starting with the Chiefs is never fun – just like last year, when they were smoked by Baltimore in Week 1.

Kansas City Chiefs: Over/under 12.5 wins (my prediction: stay away, or hedge slightly to the UNDER)

Sure, they went 14-2, but it looks like they’ll have four new starters on the offensive line. After three straight years dominating the AFC, you wonder if they slog through the regular season?

This seems WAY too high. Should be the Over/Under for how many games Andy Dalton will start. Not feeling this team at all, whether it’s Dalton or Justin Fields under center. Under or pass. Open with the Rams on SNF and it will be downhill from there.

**Green Bay Packers: OFF THE BOARD**

I know that the Packers are in the midst of a whirlwind of YUCK…however, if the Aaron Rodgers situation does resolve itself I can see the Packers easily winning 11 games. The opening number of total wins for the Packers before the Rodgers drama was 10.5, and after the NFL Schedule was released on Wednesday night I can’t see Green Bay winning any LESS than 11 games in a 17 game season with 12 under center.

Of course, if Aaron is NOT playing for the Green & Gold this year, all bets are literally off as we’d have less than no idea what this team would look like.

My pick (if or when the Packers are back on the board) is OVER 10.5. In my first analysis of the Packers schedule, I can see Green Bay going 13-4 or even 14-3. This could be “THE” year if Rodgers returns.