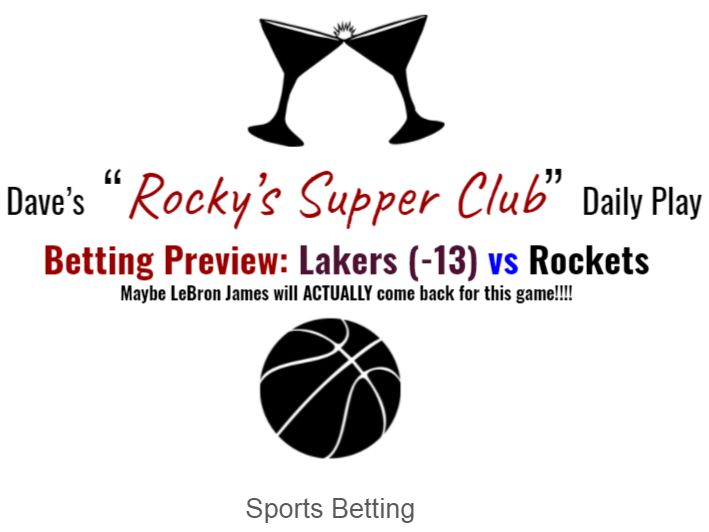 Yesterday in this space I gave what I expected to be a solid play, Lakers/Knicks going over the very low total of 213 ½, with the assumption that LeBron James would be playing. That narrative took a nose-dive in the hours leading up to the game as it was announced that LBJ would be resting one more game and would not play.

The over went out the door as soon as the news broke. The Lakers held on to beat the Knicks in a really interesting game 101-99 in (OT).

Tonight, the EXPECTATION is that LeBron James actually does return, which is welcome news for the Lakers who’ve listed Anthony Davis as “day-to-day” after sustaining what the team calls a “strained groin” and would wait until near game-time to make a decision on his availability.

Houston is currently on a 6 game losing streak, and has been the worst team in the NBA this year for multiple reasons, though mostly stemming from the James Harden trade, and the subsequent trade of Oladipo to the Heat. The Rockets are BAD….but…..the Lakers aren’t the Lakers that beat Houston by 17 and by 18 in January.

Looking at the spread on tonight’s game, and considering the fact that L.A. is most likely going to be without one of its major stars’ in Anthony Davis (again) and will see LeBron James make another attempt at returning, I simply can’t see how the Lakers will cover the (-13) point spread. The Lakers don’t look like the kind of team to beat ANYBODY by 13 at this point.

My thoughts on this game, and considering some recent trends pointing to the Rockets ability to cover in recent games, say take Houston (+13):