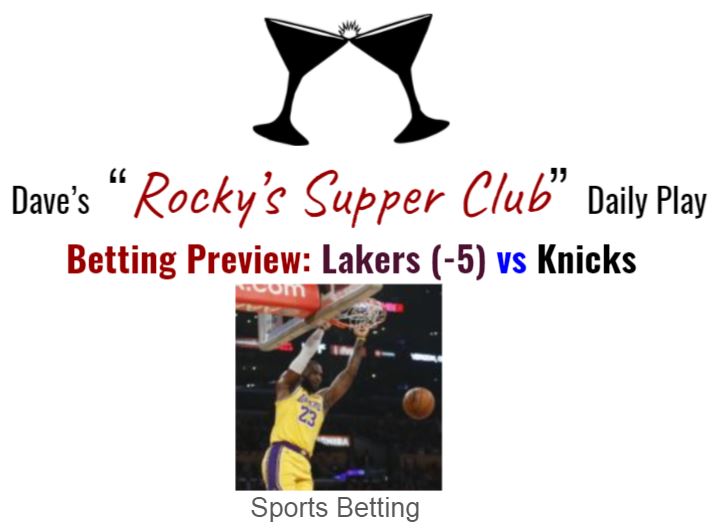 It’s been nine days since Lebron James last suited up for the Lakers after missing an entire month due to a high ankle sprain. The Lakers desperately need King James back in the lineup, even with Anthony Davis now back and healthy, as the Lakers are currently in the 7th spot in the NBA’s Western Conference, assuring them of nothing except a CHANCE to be in the actual playoffs IF they win the play-in-games.

The Knicks are coming off of a very solid 106-100 win over the Clippers on Sunday, another sign that this team under Tom Thibodeau are really headed in the right direction. Derrick Rose came off the bench to score 25 points and added six rebounds and eight assists to lead the Knicks to a 106-100 victory over the Clippers. Rose hit 11 of 17 shots. Reggie Bullock added 24 points on eight of 17 shooting, including five of 12 from the three-point range. New York shot 46.7% overall, including 40.6% from the three-point range.

After years of abject futility and humility for the Knicks and their fans, New York has been a revelation this season with a record of 38-30, good for 4th in the NBA’s Eastern Conference this season.

How these two teams will match up with each other this evening should be fascinating and the spread, Lakers (-5) a little rich for my blood. As a matter of fact, the Knicks have been so good recently they’ve covered the number in 8 of their last 10 games as a road underdog (which they are tonight +5), 8 of their last 10 versus a team with a winning home record (the Lakers are with a record of 19-15), and 12 of their last 15 road games overall. I am not going to be against these kinds of trends.

What am I looking for tonight? Another play on the TOTAL with tonight’s line being set at 213 ½. Compared to some of our recent games featured in this space, that is a VERY low number.

These trends combined with the recent hot-shooting of Derrick Rose and Reggie Bullock for the Knicks, Julius Randle playing for the 2nd consecutive game in his old arena (Staples Center) and the fact that the Lakers haven’t had Lebron and AD on the court at the same time for what seems like forever, makes me think this one goes OVER the total of 213 ½, but just barely.

Should this game fall UNDER the number due to poor shooting, or great defense from both teams, I wouldn’t be surprised. However, the OVER has come in for us in each of our last 3 columns, and I like the way the trends are pointing for tonight’s game.