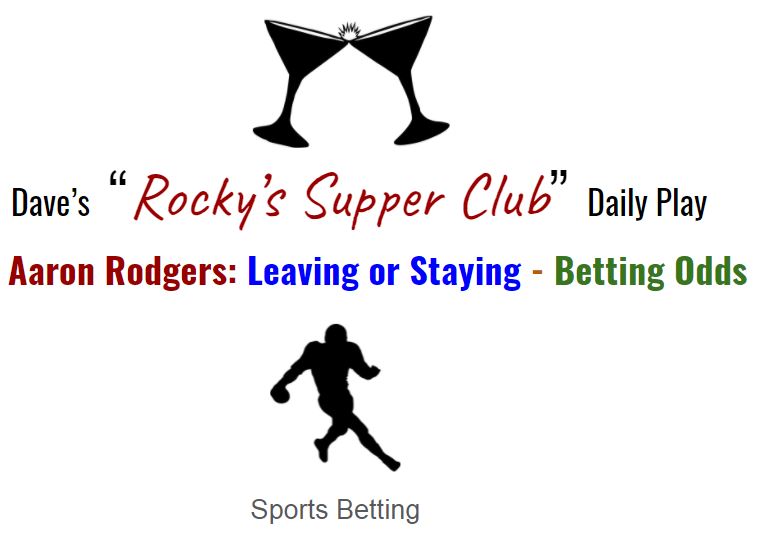 What’s on the table today?: Odds that Aaron Rodgers leaves the Packers

Well that was an interesting 1st Round of the NFL Draft. Once again the Packers don’t take an offensive weapon, and now ESPN is reporting that Aaron Rodgers wants out of Green Bay.

That Rodgers would want out of the Packers org isn’t the biggest shock in the world considering the drafting of Jordan Love last year, however, it’s HOW this is all going down that is really tough to stomach. It’s like the Packers didn’t want him, and now the feeling appears to be mutual.

Among other issue in trading Rodgers, he’s the best at his position and you won’t find anyone better, are the cap implications. If Green Bay moves off of Aaron before June 1st they’ll have to eat over $30M in dead cap money. If they wait until after June 1st, the number for 2021 is $14.4M and in 2022 $17.7M. These are not easy numbers to swallow by any team, especially one as cap-strapped as the Packers are in the next few years.

Perhaps these reasons are why the Oddsmakers aren’t thinking too much about Rodgers leaving Green Bay, in fact, they’re betting AGAINST it.

Via SportsLine oddsmakers: Will Aaron Rodgers be the Packers’ starting QB Week 1?

I don’t pretend to know what’s in Rodgers head or his heart, but common sense tells me it’s WAY too much to let him walk out the door right now, financially and practically it’s not a good idea.

That said, nobody in the NFL has more leverage right now than Aaron Rodgers, and if he really does want to force his way of Green Bay, he just may be able to do it.