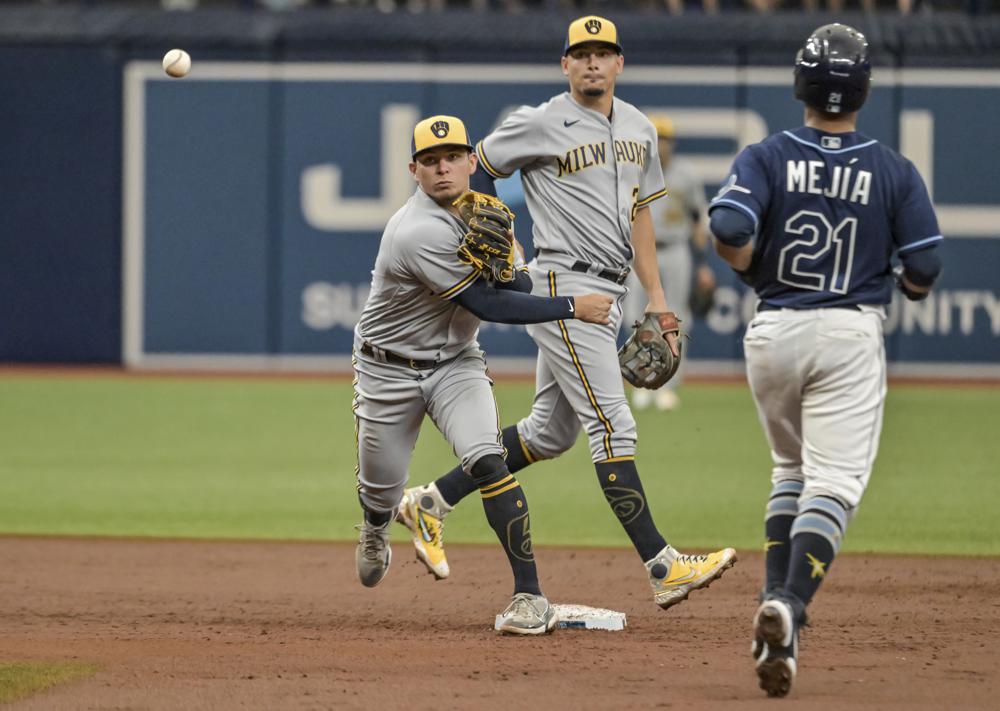 Tellez has five home runs and eight RBIs in his past six games.

Tellez hit his 15th homer, a tiebreaking, solo drive in the eighth inning to right field off reliever Calvin Faucher (1-2). The ball struck the outer C-ring of the catwalk at Tropicana Field.

In the second, Tellez homered to deep center off opener Jalen Beeks.

Davis robbed Randy Arozarena of an extra-base hit in the second when he made a flying, over-the-shoulder catch while crashing head-first into the wall. He stayed down for several minutes holding his back and initially stayed in the game before leaving in the bottom of the third with lower back and rib cage discomfort.

Taylor Walls had a two-run double in the fourth that scored Arozarena and Harold Ramirez to put the Rays ahead 2-1.

Luis Urias’ two-run homer in the fifth off Shawn Armstrong also hit the C-ring in left-center and gave the Brewers a 3-2 lead.

Wander Franco hit an RBI double in the fifth that made it 3-all.

Jace Peterson added a home run in the Brewers ninth.

Brad Boxberger (2-1) struck out two in a scoreless seventh to get the win.

Josh Hader started the ninth giving up a single to Francisco Mejia and walking Brujan, but retired the final three batters to pick up his 24th save in 25 attempts.

Brewers: LHP Aaron Ashby (left forearm) threw a bullpen session and could be available to pitch in the next few days.

Rays: RHP Drew Rasmussen (left hamstring) is expected to be reinserted into the rotation this weekend.

Milwaukee will send righty Adrian Houser (4-8) to the mound for the start of a four-game set against the Pittsburgh Pirates.

Tampa Bay’s rotation is yet to be determined for their five-game set against the Toronto Blue Jays.