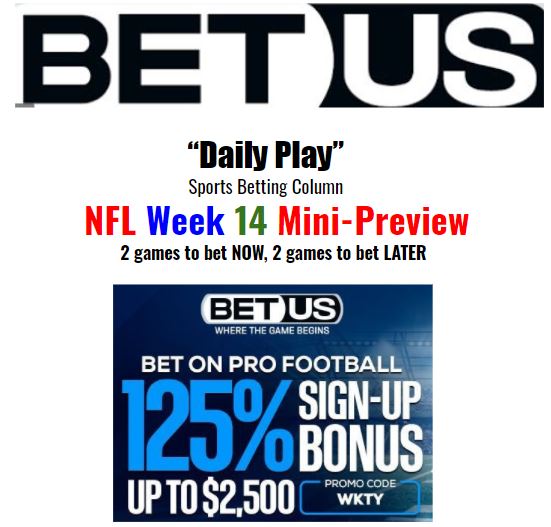 What’s on the table today?: Week 14 plays to bet early, and bet later

The Green Bay Packers return to Lambeau Field this Sunday night to play host to the long-time rival (now a pile of hot-garbage) the Chicago Bears, the Dallas Cowboys with always underwhelming head coach Mike McCarthy head to Washington to play the “Football Team”, and the Seattle Seahawks and Houston Texans play a game, because it was scheduled to be played, and the Giants of New York are in Los Angeles to take on a real professional football team in the Chargers..

These are FOUR games I’m going to make plays on this weekend, two NOW, and two LATER.

First let’s start with the Green Bay Packers at home versus a team that in uniform will resemble the Chicago Bears. The Bears have won exactly once in their last seven contests, and that was a Thanksgiving day snoozer versus the (at the time) winless Lions. The Packers on the other hand have been rolling ATS this season going 10-2, and I want to get this game at (-13) while there is still time.

In my second, take now play, I’m going to Los Angeles where the Chargers will be hosting the dreadful Giants. The Giants are now playing Jake Fromm (yea that guy) after losing Daniel Jones and Mike Glennon who just halted his most recent grow spurt capping his height at a whopping eight feet tall. New York is simply in shambles, and the Chargers, while a good football team, aren’t going to beat anybody, not even the Giants by 40. I like the UNDER on this and I like it before it gets any lower.

Up next, the Washington Football Team hosting the Dallas Cowboys. The Cowboys got right with a Thursday night win over New Orleans, thanks in large part to their defense and even more thanks to Saints QB Taysom Hill (four interceptions). As for the Dallas offense, it was outgained by New Orleans and went just 2 for 13 on third downs.

This will be the Cowboys’ second straight road game and third in four weeks. It’s also an outdoor game in December, which has been the kryptonite for Jerry’s Kids. Washington opened as a 4.5-point underdog and that spread is already up to +5. America’s Team will get its usual public pounding, so if you like the WFT you’ll want to wait for all the points you can get.

Finally the Seattle Seahawks and Russell Wilson take on the Texans in Houston. The Seahawks scored 30+ points for just the second time this season in thier win over the 49ers on Sunday. The Texans got blanked 31-0 by the Colts, the sixth time this season they’ve been held under double digits. This total opened 43.5 and some online shops are dealing the Over (-115) or have made a move to 44 points.

If you have more faith in Seattle’s defense than its offense, wait it out and see how high this number gets before coming back.

Take the (UNDER – bet later)

Sign up today https://record.revmasters.com/_VKvwv8GdkE-xC8fZxaqRG2Nd7ZgqdRLk/1/  with our new partners at BetUS using the promo code WKTY and claim your 125% sign up bonus. You deposit $100, you get $125 FREE….yes…FREE!