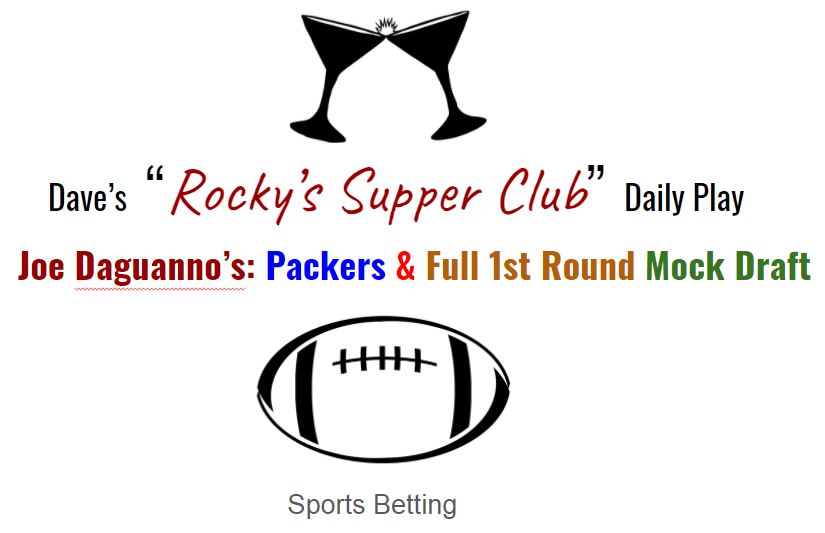 Green & Gold insider Joe Daguanno delivers to us today his full 7 Round Packer Mock Draft as well as his thoughts on how the 1st Round of the NFL Draft will look (player by slot not necessarily by team) will shake out.

Lending some special commentary to Joe’s Packer Mock is good friend of the show; “Peter the Smoking Spider” who famously grades each year’s Packers draft picks by the number of cigarettes each pick makes him want to smoke.

Here’s to hoping tonight’s NFL Draft works out well for your team *(whoever that may be)* and for you as a fan. Many call the NFL Draft “Christmas in April” for football fans, and I can’t argue that take much at all.  Enjoy!

One…just one celebratory cigarette and I can sleep easy. In the words of one of my idols, Tracy Morgan, “I’m getting everyone pregnant tonight!”

This one’s a full pack…the dreaded “Big Po” shows up. Lots of potential but no 2020 tape, small school and shot up due to the Senior Bowl. Too bad there isn’t a Watt brother here for Joe to pick and go full homer. Alternatives could be LB Jabril Cox from LSU or CB Ifeatu Melifonwu from Syracuse. Would give them the chase LB to go with Martin/Barnes or outside CB to go with Samuel who could be more of a slot guy.

Another one cigarette pick!!! This one please dip in poison and jam into each one of my eyes and then step on me with a Croc to put me out of my misery. No…just…no. Alternatives here could be CB Paulson Adebo from Standford or DT Tyler Shelvin from LSU

Half a carton, minimum. A man between positions is a man without a home…no thanks. Alternative could be WR Amari Rodgers from Clemson who would be a perfect slot receiver in the mold of Randall Cobb.

Second good one smoke pick…love Felton in the fourth!!!

Seems to be MVS 2.0 regarding his role and limitations. Maybe not bad if they let MVS walk after this year but most likely limited impact particularly in year one.

5 smoke pick. Love the position, not sure about the player as there’s questions he can keep weight on to compete at the next level. Could be several other Oline prospects at this point of the draft.

This one’s a full pack to celebrate getting JJ in the sixth. Have seen him rated much higher but then again I saw a lot of folks mocking ESB to the Packers in Round 1 or 2 several years ago… “so you’re saying there’s a chance”

This pick I missed because ESPN cut to commercial for the fourth time while the Packers were picking and I was still finishing from the previous pick. Depth and Special Teams contributors are what you’re looking for here and this guy is both and that may be all he is.

This one will take me about six smokes to figure out how to pronounce his first name. Already looking at who goes undrafted at this point of the draft, may have even fallen asleep. He’s a guy.