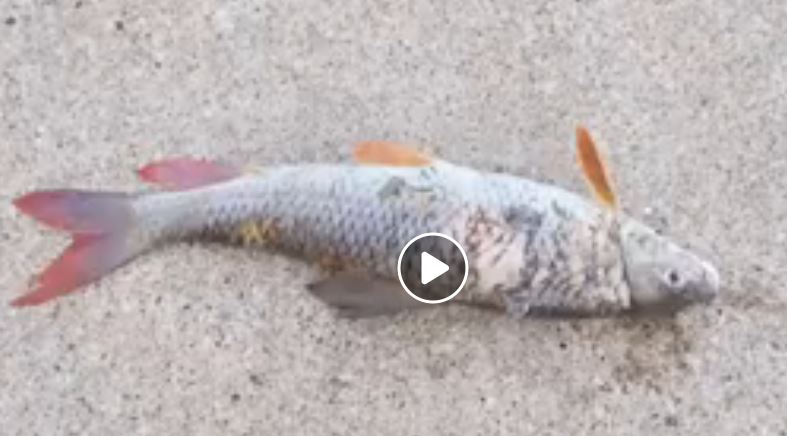 Over the weekend I had the most remarkable thing happened to me and, no, it’s not what you’re thinking — I didn’t win the Wisconsin state lottery.

I did, however, get delivered a really interesting present, a falling sky-fish from the talons of a mighty hawk, which landed on my driveway as I watched in amazement.

The origins of sky-fish were really starting to puzzle me. Where does it come from? Why did it land in my driveway? Was this a sign? After all, at the time I was on the back patio, calmly having my third cocktail of the evening, when over my left shoulder I see the mighty hawk, and I got a little scared.

I had no idea why it was flying so low, and then it dropped this equally mighty sky-fish. While I was on the back patio having said cocktail, the Imagine Dragons song “Believer” was also on. What was I to make of this?

Over the course of Saturday night, and into Sunday, and even here on Monday, I was trying to figure out what sky-fish means. Am I supposed to be getting some sort of insight from sky-fish?

My first thought of course was my affection for Buzzard Billy’s in downtown La Crosse. Buzzard Billy’s has tasty food like armadillo eggs, Gator fingers, and much more, and the restaurant is coincidentally named the “Flying Carp Cafe.” Coincidence? Seems fishy.

Without being sure I could rule out my love for Buzzard Billy’s, the “Flying Carp Cafe,” as the reason for being delivered a sky-fish from a mighty hawk, I also thought about this: What if the fish was in omen? What if it was telling me that I needed to become a pescatarian?

Chew on that for a minute. I already don’t eat red meat, but am I having too much other non-red meat? Is the sky-fish a warning that I should clean up my diet even further? These are the kinds of things that keep me up at night.

Looking through my Facebook feed over the weekend, after I had posted a video of this event (which you can see on my Facebook page), I received a number of responses as to why sky-fish may have landed in my driveway.

One friend described sky-fish as a sucker fish, and indicated perhaps I am a sucker, and therefore was delivered a sucker sky-fish.

Others suggested it was simply as benign as a hawk carrying a heavy fish, dropping it on accident, and wishing I wouldn’t have been so quick to pick it up and throw it away. Plausible, sure, but not nearly as fun to think about.

Finally, after some fairly serious thought and consideration, I came to the only conclusion that seems to make sense to me. The mighty hawk dropped sky-fish on my driveway, to mock me for my lack of fishing skills.

You see, as somebody who grew up without the bounty of the Coulee Region in my backyard, I’m way behind the eight ball when it comes to fishing.

I think the hawk was really trying to send me a message: “Dave I’m better than you. I can fly, I can fish, and if your little cat isn’t careful, I can take him too!”

I think the hawk was really trying to rub it in my face. Perhaps literally.

I guess we’ll never know the true origin, or reason behind, why sky-fish found its way into my life, but I do think we can speculate. And speculation, along with rampant mis-characterization, is a great way to describe the events of 2020.