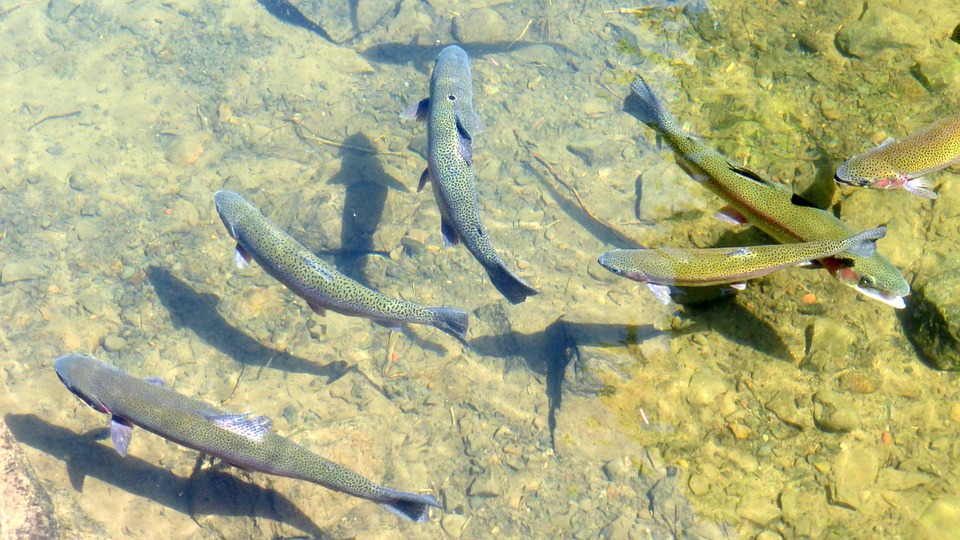 DUBUQUE, Iowa (AP) — For those who live in the tri-state region — or even those who are passing through — it is almost impossible to ignore the area’s topography.

A mixture of rolling hills, cliffs and valleys make for breathtaking scenery, representing a sharp contrast from the flatlands for which the Midwest is known.

The scenery owes much to the distant past.

Northeast Iowa, southwest Wisconsin and northwest Illinois all are considered part of the Driftless Area, an expansive swath of land that escaped glaciation during the last ice age.

Local fishermen know there is more to the Driftless Area than what immediately meets the eye: The porous topography creates hundreds of natural springs below the land’s surface, feeding vast stretches of streams that flow through the region.

These streams serve as an ideal habitat for fish species and, consequently, create a beloved venue for outdoorsmen.

It is not uncommon for opportunistic fishermen to travel dozens, or even hundreds, of miles to take advantage of the local streams, the Telegraph Herald reported.

The local anglers also appreciate the fishing chances afforded in the Driftless Area.

“I have fished all over the map, and the Driftless Area is pretty unique,” said Dubuque resident Mike Stallsmith. “There are a lot of fishing opportunities out here.”

The streams running through the tri-state region have another distinct quality that is particularly important around this time of year.

Dan Kirby, a fisheries biologist with the Department of Natural Resources, noted that the streams generally do not freeze during the winter.

“The trout fishing is something we have in this part of the state that gives us year-round opportunities,” said Kirby, who is based out of Manchester, Iowa.

Kirby noted that there are multiple places in the tri-state region to catch trout. He said Bankston Creek, Swiss Valley Nature Preserve, Little Turkey River and Big Mill Creek are among the best option.

He speculated that anglers are drawn to the activity by a variety of motivations.

Many of them fish in order to get food — and many species in local streams would make for a fine dinner, he noted.

For others, however, the challenge of reeling in a fish serves as the primary motivation.

Kirby, an avid fisherman, enjoys the peace and quiet that comes with a day of fishing. The winter often can offer a unique experience.

“Personally, I do it for the solitude,” he said. “When you get out in the summer, it can be a lot more crowded.”

This winter has a different feel than past seasons, Kirby noted.

The unseasonably wet weather that accompanied the fall deterred many fishermen. The mild start to this winter allowed many to catch up on their fishing, although the weather has since taken a turn for the worse.

Kirby explained that streams generally continue flowing even during the coldest stretches.

That doesn’t mean that winter fishing is free of difficulty, however.

“When you are fishing and it’s really cold, that can lead to some challenges,” he said. “Sometimes, as you are casting and reeling, you can bring a little water in on the line and it begins to freeze.”

Fishermen can encounter a variety of species in local streams, including rainbow trout, brown trout and brook trout. Some anglers might even reel in a white sucker, Kirby added.

He noted that anglers utilize a variety of approaches when it comes to fishing.

The majority use spin casting, which is the more traditional rod-and-reel approach, he noted.

Others turn to fly-fishing.

Mike Stallsmith has been involved with the Dubuque Fly Fishers for about seven years and serves as president. He said about three dozen people have memberships in the group.

There are multiple reasons why area residents gravitate to the organization.

“A big part of it is the social interaction,” Stallsmith said. “But members also get some great tips for fishing. We don’t have any big secrets when it comes to the good spots to fish. We’re really good about taking members to the places we know.”

Stallsmith insists that fly-fishing adds another level of excitement to the fishing experience.

“What I like about it is, you are always doing something,” he said. “You’re constantly thinking, ’Where are the fish going to be and what are they feeding on? There is nothing wrong with bobber fishing. But fly fishing is different from sitting in a boat and watching a bobber.”

0
0   0
previous After further (judicial) review: No do-over of Rams-Saints
next Johnson triggers wreck, then wins Clash at Daytona
Related Posts