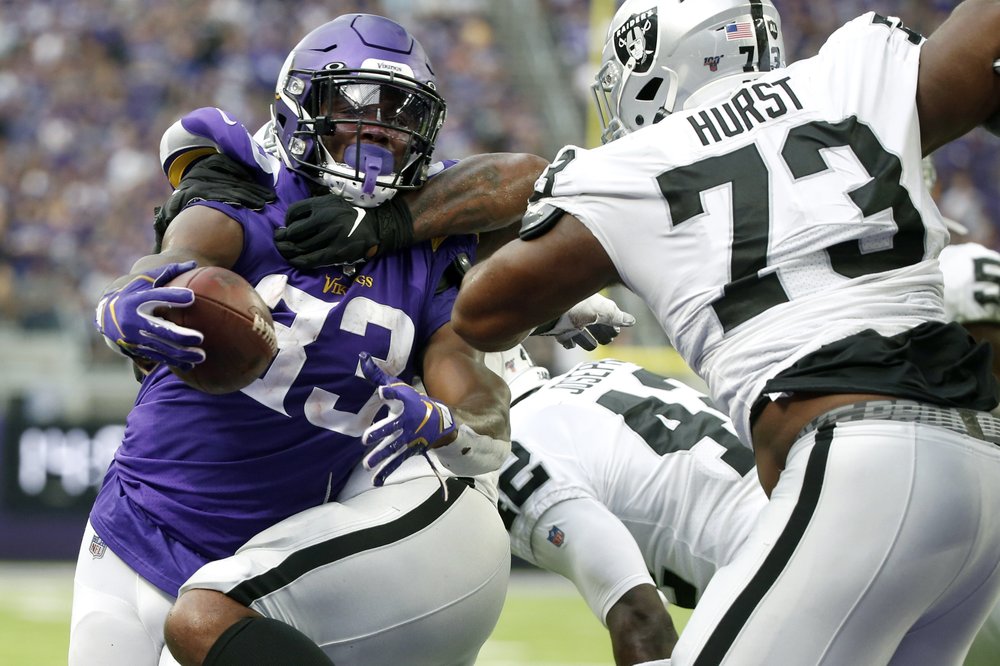 MINNEAPOLIS (AP) — Each of Dalvin Cook’s first two seasons was interrupted by injury, and the Minnesota Vikings were subsequently much more driven by the pass.

His skill set no longer under wraps, Cook has given this Vikings a clear and old-school identity.

Cook cruised past the 100-yard mark for the third straight game, Kirk Cousins rebounded from his rattled performance the week before with a turnover-free afternoon, and the Vikings rolled by the Oakland Raiders 34-14 on Sunday.

Though he missed 19 of his first 34 games in the NFL to a torn ACL as a rookie and then with nagging hamstring trouble last year, Cook never lost any fans on the coaching staff or in the locker room.

“I leave it all on the line for those guys because they stood behind me 100 percent when I was having my ups and downs and just going through adversity that’s just part of this game,” said Cook, who leads the league with 375 rushing yards. “I just credit those guys for being behind me.”

The defense had plenty to do with this victory, too. An interception by Harrison Smith of an overthrow by Oakland’s David Carr set up the second of two touchdowns by Adam Thielen to give the Vikings a 21-0 lead early in the second quarter. Eric Wilson had two of Minnesota’s four sacks.

Cook had 16 carries for 110 yards and a score in just three quarters, and his backups capably grabbed the baton. Rookie Alexander Mattison got his first NFL touchdown as the Vikings (2-1) rushed for 211 yards and didn’t even attempt a fourth-quarter pass for the second time in two home games. Last week in a loss at Green Bay, Cousins had three turnovers, including a first-and-goal interception in the end zone.

“It’s a beautiful thing when you can run the ball effectively,” Cousins said.

Cousins enjoyed a sack-free game for the first time in his Vikings career and finished a crisp 15 for 21 for 174 yards and one score to Thielen on their opening possession. That throw covered 35 yards, off a bootleg that allowed him to plant in front of a pressuring P.J. Hall and zip the ball across the field where Thielen was racing past safety Curtis Riley. That was one of three touchdown drives of 75-plus yards, and Thielen scored later on an inside handoff off a jet sweep at the goal line. The Vikings similarly built a 28-0 lead in their season-opening win over Atlanta.

“If you fall behind against this team early, they have the closers that make it very difficult on you, and the noise doesn’t help,” Raiders coach Jon Gruden said.

Carr went 27 for 34 for 242 yards and touchdowns to J.J. Nelson and Tyrell Williams. Tight end Darren Waller racked up 13 receptions for 134 yards, mostly in garbage time. Nelson scored on a 29-yard flea-flicker pass midway through the second quarter to pull the Raiders within two touchdowns, but that was as close as they came in this dispiriting start to a stretch of six straight weeks without playing a game in Oakland.

“It’s not getting any easier for us, but I don’t think guys in this locker room are looking for easy,” Waller said.

Dan Bailey made all four extra points and both of his field goals for the Vikings, including a 50-yard try. His predecessor, Daniel Carlson, was booed by the Minnesota crowd before he had a 48-yarder clank off the right upright. Carlson was cut after just his second NFL game by the Vikings, after missing three field goals in a tie with the Packers a year ago.

Two-dozen members of the 1969 Vikings team that won the final NFL championship before the merger and took the franchise’s first of four Super Bowl losses were feted at a halftime ceremony. The Purple People Eaters defensive line — Carl Eller, Gary Larsen, Jim Marshall and Alan Page — together served as the honorary Gjallarhorn blowers before kickoff of this game that, coincidentally, gave the Vikings their 500th win over 59 seasons of existence.

“Our entire lives as pro football players is because of what they did and what they built and the brand they created for the Minnesota Vikings,” Cousins said. “I love having them come back.”

Raiders: Backup LB Marquel Lee hurt his ankle in the first quarter and didn’t return. LB Vontaze Burfict missed about half of the game with an elbow injury, but he was cleared to return in the third quarter. Another starting LB, Nicholas Morrow, walked off with an unannounced injury in the third quarter.

Vikings: Wilson started for LB Anthony Barr, inactive with a groin injury. CB Mackensie Alexander missed his second straight game with an elbow injury, but CB Mike Hughes was back in the nickel role for the first time since tearing his ACL in the sixth game of last season. … RG Josh Kline left the game in the third quarter for evaluation in the concussion protocol. WR/PR Chad Beebe was also forced out with an ankle injury.

Raiders: at the Colts next Sunday. Their last victory in Indianapolis, where they have only played four times in their history, was in 2001 in Gruden’s first stint.