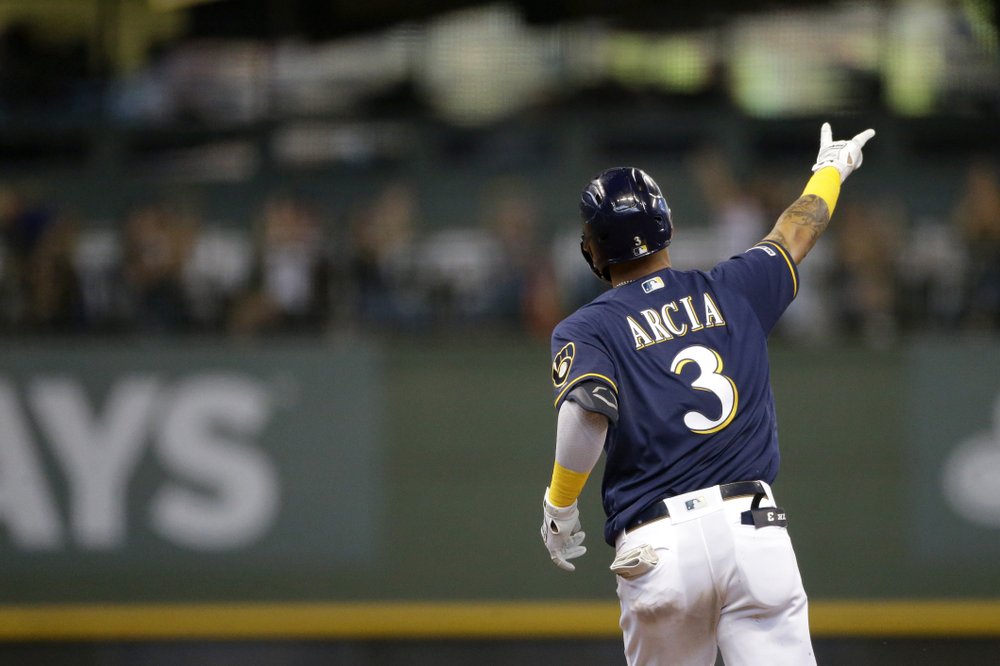 MILWAUKEE (AP) — Eric Thames and Orlando Arcia had been hushed at the plate during the Milwaukee Brewers’ crucial homestand. They made some noise Sunday.

Thames hit two home runs, Arcia also connected and the Brewers took a combined perfect game into the seventh inning while beating the Pittsburgh Pirates 4-3 to match Washington atop the NL wild-card standings.

“That kind of defines this stretch for us,” Milwaukee manager Craig Counsell said. “It has been different guys offensively. Today, it was two guys who had been a little quiet and that’s how it works.”

The Nationals lost 5-3 to Miami earlier Sunday, locking them into a tie with the Brewers for the top wild card. Milwaukee owns the tiebreaker over Washington after winning their season series and would host the wild-card game if they finish the season with the same record. Washington has played two fewer games and technically leads Milwaukee by percentage points.

“We’re all feeling it. All of us aren’t planning on going home anytime soon,” Thames said.

Arcia connected in the second, but the shortstop also let a line drive tip off his glove with one out in the seventh for a hit that ended a combined perfect game bid in Milwaukee’s regular season home finale.

Milwaukee has won eight of nine and extended its September record to a major-league best 17-4. The Brewers are 10-2 since losing NL MVP Christian Yelich to a fractured kneecap.

“It’s hard when you’re grinding through September when your body is tired,” Thames said. “But the energy from the crowd and the team, we definitely pick each other up.”

Brewers pitchers held the Pirates, who lost their ninth straight, without a baserunner until Bryan Reynolds’ single against Gio Gonzalez with one out in the seventh. Reynold’s liner went off the heel of Arcia’s glove as he lunged for the ball.

All-Star Brandon Woodruff made his second start since missing two months with a left oblique strain. He pitched two innings but departed for a pinch-hitter in the second after throwing 38 pitches.

“It’s super fun just getting out there and being able to contribute in some way,” Woodruff said.

Jay Jackson struck out the side in the third and Gonzalez (3-2) and Drew Pomeranz combined for four scoreless innings.

Josh Hader got four outs for his 35th save in 41 tries.

Milwaukee’s pitchers made it challenging for Pittsburgh’s struggling offense.

“We haven’t been scoring many runs and you keep getting different looks from guys with good stuff,” Pirates manager Clint Hurdle said. “All those arms were fresh and they’re real and there’s spin and velocity. We’re not hitting mistakes, and they aren’t making a lot of them.”

Arcia gave the Brewers an early lead with a solo home run off Trevor Williams (7-8). The lead grew to 2-0 when Thames led off the fourth with a home run on the first pitch from Williams.

Thames belted a two-run homer off Michael Feliz in the sixth to extend the lead to 4-0.

The Pirates scored three times in the seventh, the first when Arcia failed to field a slow roller off the bat of pinch-hitter Melky Cabrera. Cole Tucker’s two-run single off Hader cut the lead to 4-3.

Williams, who was tagged for seven runs in 2 1/3 innings with two homers and three walks in his last outing, gave up three hits and two runs in five innings. He walked two and struck out six.

Pirates: C Elias Diaz was out of the lineup. Diaz left in the fourth inning of Saturday night’s game with a right knee injury, sustained while stopping a pitch in the dirt.

“When I bought the team 15 years ago, I preached not thinking small here,” Brewers owner Mark Attanasio said. “But we are the smallest market in Major League Baseball, so this is a testament to our fans’ support.”

Pirates: Pittsburgh opens a three-game series at home against the Chicago Cubs on Tuesday with Mitch Keller (1-5, 7.74 ERA) getting the start.