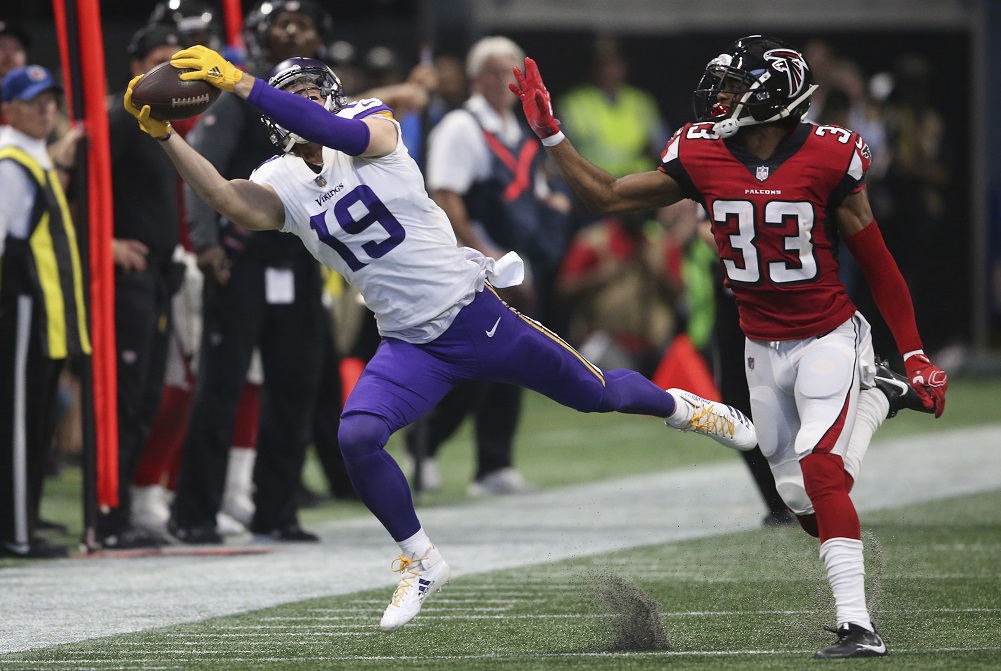 Vikings have plenty more to play for in rematch vs. Bears

Vikings have plenty more to play for in rematch vs. Bears

MINNEAPOLIS (AP) — The Minnesota Vikings have won a whole bunch of games since their previous matchup with Chicago, a steady march to become NFC North champions that has put plenty of distance between the playoffs they’re about to enter and that ugly first half they played against the Bears.

That’s precisely where their path to the postseason began to straighten out.

When Case Keenum replaced the ailing Sam Bradford again at quarterback, the Vikings steered themselves back on course that night of Oct. 9 for a 20-17 victory that was the first of eight straight.

For as much as coaches and players speak about the clichéd one-game-at-a-time focus, momentum can be an undeniable force.

“It was big,” said wide receiver Stefon Diggs, who hobbled through that game with a groin injury. “I wouldn’t say really like a turning point, but definitely some momentum moving into the rest of the season that no matter how we’ve got to do it, we can get a ‘W’ and finish.”

The Vikings had fallen to 2-2 at the quarter point of the season, stinging from a 14-7 defeat at home by Detroit made possible by three lost fumbles and made worse by the season-ending ACL tear to running back Dalvin Cook’s knee suffered that afternoon.

After missing the three previous games with knee trouble, Bradford was cleared to return against the Bears. He clearly wasn’t right. Bradford was sacked four times, and the Vikings totaled 34 yards on six possessions while he was in the game.

Keenum took over again late in the second quarter and, 10 wins later, has the Vikings on a Super Bowl track that could’ve been wrecked by the absence of two of the team’s most vital players.

“It was that stretch that we talk about,” wide receiver Adam Thielen said. “Every game seemed like a bigger game.”

With a win in this final regular-season game, they’ll secure the No. 2 seed for the NFC playoffs that comes with a first-round bye. That’s basically a bonus victory, and the Vikings have been treating this scenario accordingly.

“The biggest thing is the confidence that this team is playing with,” tight end Kyle Rudolph said.

“We feel like if we take care of our business and we play the style of football that we’re accustomed to, it doesn’t matter who we play, when we play, where we play. It’s just how we play.”

The Vikings can also get the coveted bye with an assist from any of three other teams: New Orleans beating Tampa Bay on the road, Atlanta beating Carolina at home or Los Angeles beating San Francisco at home.

Just one of those would need to happen. That’s quite the safety net the Vikings have no desire to use.

“We don’t want to get any help from anyone. We want to go out and take care of our business, play well, continue to ride this momentum into the playoffs,” Rudolph said.

“The last thing you want to do is limp into the playoffs coming off of a loss. We want to go out and play well and end this season the right way.”

Here are some other key angles to follow during the game on Sunday:

FOX WATCH: With a 14-33 record in three years, this could be John Fox’s final game coaching the Bears. If so, it’ll be the end of one of the least successful tenures in the franchise history. Only Abe Gibron has a lower winning percentage as a Bears head coach, going 11-30-1 (.274) from 1972-74.

“I’ve never had trouble getting employment in this league,” Fox said this week, “and I’m not going to start worrying about it now.”

YOU AGAIN?: This is the fifth time in 13 years that the Bears will wrap up the regular season in Minnesota, including three of the past four, but this is the first of these finales that features any kind of postseason impact. Both teams were eliminated in 2016, 2014 and 2011. The Bears already had the division title clinched in 2005.

“It’s still a game. Everybody has to play it. And you have to approach it that way,” Fox said. “It will be no different for us.”

LONG WAY: Bears quarterback Mitchell Trubisky has come a long way since he debuted against the Vikings in that matchup in Chicago nearly three months ago, and the second overall pick in the draft would love to show it.

Trubisky completed 12 of 25 passes for 128 yards on Oct. 9, and his interception in the closing minutes set up the winning field goal by the Vikings. Though his passer rating is a paltry 78.5, Trubisky already holds the franchise rookie passing record with 2,015 yards.

With the Bears expanding the playbook for him, Trubisky has gone from completing 53 percent of his passes through his first seven games to 71 percent over the past four games while throwing for 880 yards.

“Hopefully the game will slow down for me a little bit, and I’ll be able to see things a little better,” Trubisky said.

STANDING PAT? If the Bears fire Fox, Vikings offensive coordinator Pat Shurmur could find himself a candidate for the vacancy. Vikings coach Mike Zimmer said this week he believes Shurmur deserves another opportunity, five years after his tenure with Cleveland ended at two seasons.

Shurmur has bigger priorities for now.

“At some point, if somebody wants to sit down and visit about being the head coach, I can talk about a job that I’ve already done and about how I’m better since I did that job,” he said.

0
0   0
previous Not much at stake for this year’s Lions-Packers finale
next Photographer tweets Twins' Sano grabbed, tried to kiss her
Related Posts