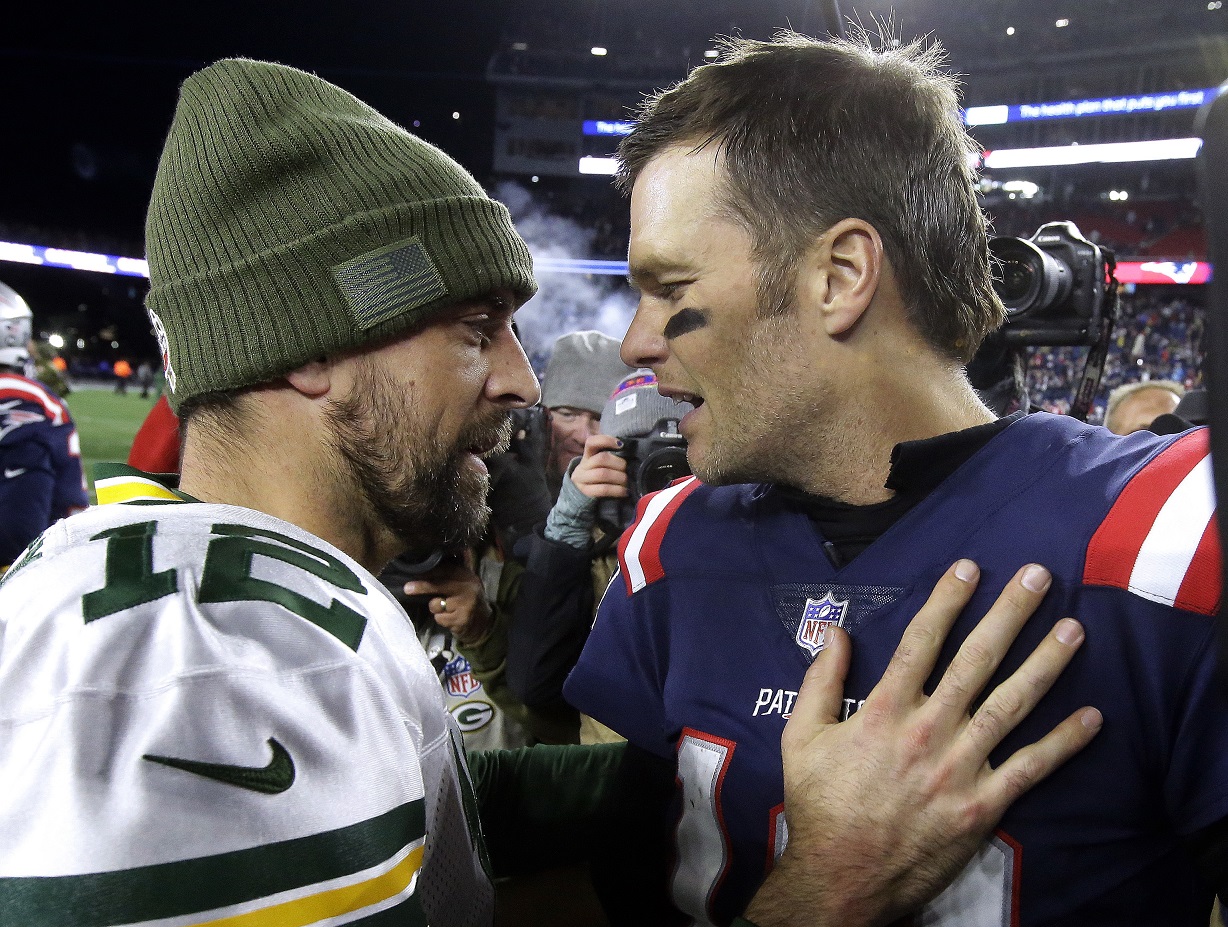 Tom Brady and Aaron Rodgers meet for only the fifth time as starting quarterbacks when the Tampa Bay Buccaneers host the Green Bay Packers on Sunday.

It’s the first matchup between the premier quarterbacks since the Bucs beat the Packers in the NFC championship game on the way to winning the Super Bowl two seasons ago.

The 45-year-old Brady holds a 3-1 edge in head-to-head matchups against 38-year-old Rodgers.

The seven-time Super Bowl winner is 5-2 overall against the Packers during his career.

Brady hasn’t had to be at his best to beat Dallas and New Orleans the past two weeks, primarily because Tampa Bay’s defense has been so dominant. Rodgers rebounded from a subpar performance in Week 1 to beat Chicago last week.

BETTING LINE: Buccaneers by 1½, according to FanDuel SportsBook.

TURNOVER DIFFERENTIAL: Packers minus 2; Buccaneers plus-4.

PACKERS PLAYER TO WATCH: RB Aaron Jones: He’s coming off a huge performance in which he rushed for 132 yards and a touchdown on 15 carries and caught three passes for 38 yards and another score. Jones struggled in the Packers’ two losses to Tampa Bay back in 2020. He rushed for 15 yards on 10 carries in the regular-season matchup and had a critical fumble in the NFC championship game while taking a hit that knocked him out for the rest of the day.

BUCCANEERS PLAYER TO WATCH: QB Tom Brady. He hasn’t needed to be at his best the past two weeks in beating Dallas and New Orleans on the road, mainly because the Bucs defense has been so dominant. Through two games, he’s thrown for 402 yards, two touchdowns and one interception after leading the NFL in completions, attempts, yards and TDs passing last season. The challenge this week is to get the Bucs offense rolling despite leading receiver Mike Evans serving a one-game suspension and the status of two other primary playmakers, Chris Godwin and Julio Jones, up in the air. Brady is 5-2 and has thrown for 15 TDs in seven career starts against Green Bay, including playoffs.

KEY MATCHUP: Packers QB Aaron Rodgers vs. Bucs defense, which has a league-leading 10 sacks and allowed just one touchdown in two games. Tampa Bay forced five turnovers against the Saints last week and lead the league in fewest points allowed (13) and are tied for second in opponent first downs per game (15) and opponent third-down conversion rate (25 percent).

KEY INJURIES: Packers OT David Bakhtiari hasn’t played yet this season and has appeared in only one game since tearing his left anterior cruciate ligament on Dec. 31, 2020. Godwin (hamstring) and Jones (knee), as well as Bucs LT Donovan Smith (elbow) didn’t play against the Saints. Their status for this week is uncertain.

SERIES NOTES: The Packers have won three of the past four regular-season matchups between the one-time NFC Central rivals.

STATS AND STUFF: The Packers and Bucs have the NFC’s two best regular-season records since 2020. The Packers have a 27-8 regular-season record, while the Bucs are 26-9. … This is only the fifth time that Brady and Rodgers have faced off as starting quarterbacks. Brady’s teams have won three of the four previous matchups, most notably Tampa Bay’s 31-26 NFC championship game victory at Green Bay during the Bucs’ 2020 Super Bowl-winning season. Rodgers’ lone victory over a Brady-led team was Green Bay’s 26-21 home triumph over New England in 2014. … The Packers allowed just one third-down conversion and seven pass completions last week against the Bears. The seven pass completions were the fewest they’d allowed in a game since 2005. … Rodgers threw two touchdown passes last week to increase his career total to 451, becoming the fifth NFL player to have at least 450. Brady leads the way with 626. … The Packers have committed only five penalties, the lowest total of any NFL team. … Green Bay’s Aaron Jones and A.J. Dillon are the Packers’ first running-back tandem to each have 20-plus carries and 100-plus yards rushing in the first two games of a season since John Brockington and MacArthur Lane in 1973. … Packers OLB Preston Smith had two sacks and a team-high seven tackles against the Bears. … This game will represent a homecoming for Packers rookie WR Christian Watson, a second-round pick from North Dakota State who went to Plant High School in Tampa. … Evans is serving a one-game suspension for his role in an on-field brawl during Tampa Bay’s win last week in New Orleans. The Bucs signed veteran Cole Beasley to the practice squad as potential help while the team is short-handed at wide receiver.

FANTASY TIP: Bucs RB Leonard Fournette. He’s fifth in the NFL in rushing with 192 yards, including 127 against the Cowboys. With Evans out, Brady figures to try to utilize him in the passing game more, too. … The Packers allowed Chicago’s David Montgomery to rush for 122 yards on only 15 carries. Dalvin Cook ran for 90 against them a week earlier.