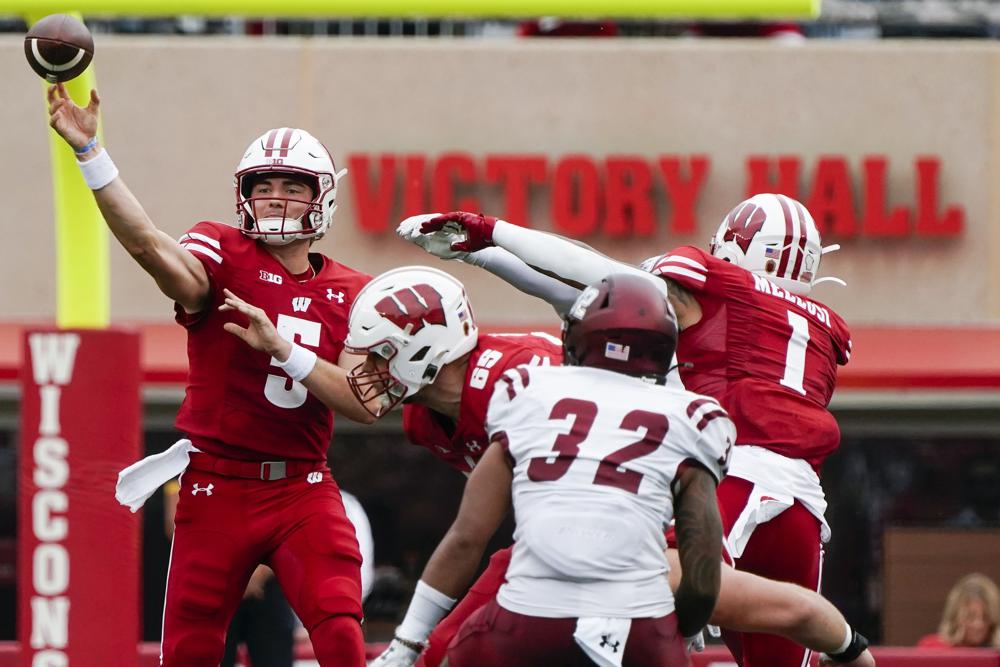 No. 3 Ohio St out to extend streak vs Badgers in B10 opener

No. 3 Ohio St out to extend streak vs Badgers in B10 opener

Things to watch during Week 4 of play in the Big Ten Conference:

GAME OF THE WEEK

Wisconsin at No. 3 Ohio State

These teams have the best conference records in the Big Ten since 2011, but Ohio State has won eight straight and 11 of 12 in the series and hasn’t lost to the Badgers in Columbus since 2004. Ohio State is allowing 2.6 yards per rush, which bodes well against a Wisconsin offense that likes to pound the ground. How the Badgers deal with C.J. Stroud will determine if this game is close. Wisconsin has allowed only nine passes of 20 yards or longer. Stroud and his elite receiving corps have combined for 18 passes of 20-plus yards, 11 of those for at least 30.

Tagovailoa is completing 77% of his passes and throwing for almost 300 yards per game for the unbeaten Terrapins. He’s going to have to overcome history to hang with No. 4 Michigan on the road. He’s struggled on the big stage, with nine touchdown passes and 13 interceptions against Top 25 opponents, compared with his 31-7 ratio against unranked teams. Michigan is among three FBS teams allowing fewer than 100 yards passing per game, and opponents are completing just 44% of their passes.

Iowa, which visits Rutgers on Friday night, has allowed 13 points over three games. The Hawkeyes’ 27-0 win over Nevada was their sixth shutout since 2016. … Rutgers has allowed a total of 97 rushing yards so far, its lowest total through the first three games since 1940. … Purdue already has been penalized 25 times for 243 yards. Last year, the Boilermakers were one of the nation’s least-penalized teams, getting flagged 58 times for 557 yards over 13 games. … Illinois will be playing its first FCS opponent since 2018 when Chattanooga visits. The Illini are trying to go unbeaten in nonconference play for the first time since 2011. … Nicholas Singleton’s 334 rushing yards are Penn State’s most in the first three games in a season since Larry Johnson’s 362 in 2002.

Indiana is a 16 1/2-point road underdog against Cincinnati, according to FanDuel Sportsbook, after narrow wins over Illinois and Western Kentucky bookending a 13-point victory over FCS Idaho. Last year, the Hoosiers hung with a Bearcat team that went on to the College Football Playoff, losing 38-24 after failing to score on two drives inside the Cincinnati 10 and committing big turnovers. The Bearcats have won two straight after their season-opening loss to Arkansas.

The Gophers have used their physical run game to rise to the top of the national rushing chart. They ran 70% of the time against three overmatched opponents simply because they could. Now they’ll play someone their own size at Michigan State, and the yards won’t come as easily. Morgan has been sharp when he’s passed, but he’ll be without injured receiver Chris Autman-Bell the rest of the season and will face a defense looking for redemption after getting shredded by Washington’s Michael Penix Jr.