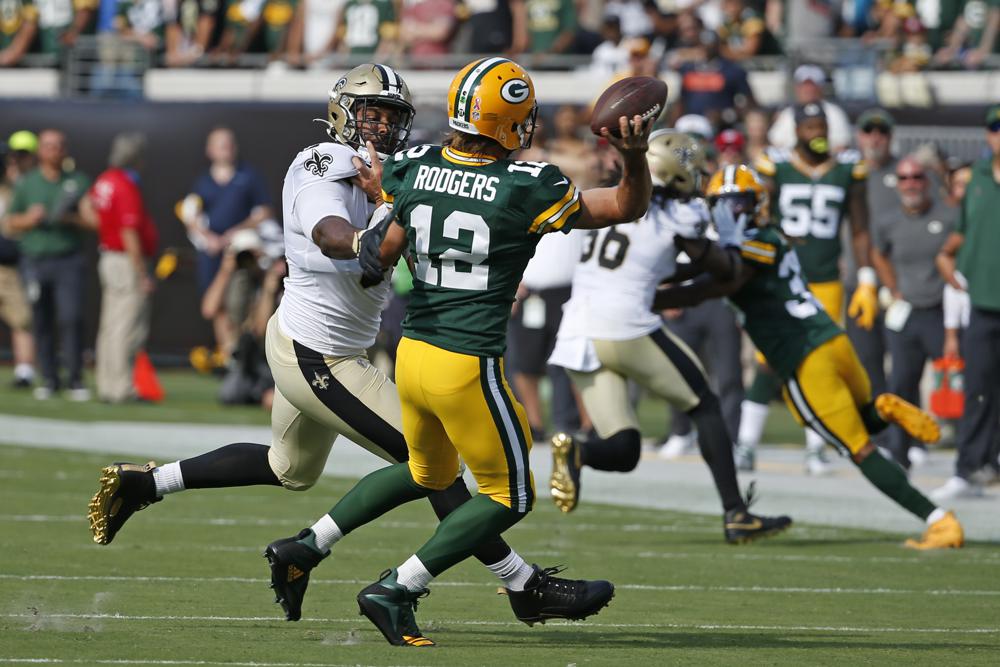 Packers ready to regroup after getting ‘humbled’ in opener

Packers ready to regroup after getting ‘humbled’ in opener

After producing perhaps the most disappointing performance of the NFL’s opening week, the Green Bay Packers must prove it was an aberration rather than an indication they aren’t nearly as good as advertised.

The Packers fell 38-3 to the New Orleans Saints in Jacksonville, Florida, snapping a franchise-record streak of six straight season-opening victories. It was a stunning result for a team that talked openly about how much was at stake this year after losing in the NFC championship game each of the past two seasons.

“Unfortunately, sometimes in this league, you get humbled,” Packers coach Matt LaFleur said Monday. “Certainly we got humbled.”

An offense that produced a league-high 31.8 points per game last season couldn’t find the end zone. Quarterback Aaron Rodgers, the reigning MVP, was 15 of 28 for 133 yards with two interceptions.

“I felt like our energy was a little bit low,” said Rodgers, who compared it to a 26-11 loss to the Los Angeles Chargers from 2019.

That offense barely got on the field in the first half because the Saints controlled possession so effectively.

“I still have the utmost confidence in our defense,” safety Adrian Amos said. “We’re going to regroup and get better this week. We’re going to get back to our assignments, see what we messed up.”

This lopsided loss followed an eventful offseason in which Rodgers skipped the Packers’ organized team activities and mandatory minicamp before reporting to training camp on time.

Players acknowledged before the season they understood what was at stake this year because of the uncertainty surrounding the futures of Rodgers and All-Pro receiver Davante Adams, who could become a free agent next year.

Yet they still delivered a dreadful opening performance.

Running back Aaron Jones wondered afterward if “a little bit of complacency” might have been an issue. Rodgers said “we probably felt like we were going to go up and down the field on whoever they had out there” before adding “that obviously wasn’t the case.”

“It kind of caught me by surprise,” Jones said. “I’m not used to losing like this. I know all the guys and myself included, around the locker room, we had a great feeling coming into this one. We felt like we worked hard in practice and did everything we needed to do leading up to it.”

The Packers never have lost consecutive games within the same season under LaFleur, who is in his third year. They’ll need to play better across the board to avoid a second straight loss when they face the Detroit Lions in a Monday night home opener.

“The beauty of the National Football League is nobody’s going to feel sorry for you and you better not feel sorry for yourself,” LaFleur said. “You’ve just got to get back to work and try to hit that reset button and focus on your upcoming opponent.”

Nothing. If you want to grasp for bright spots, the Packers’ special teams under new coordinator Maurice Drayton didn’t have any of the breakdowns that often occurred in recent losses.

Take your pick. The defense was picked apart by Alvin Kamara and Jameis Winston. The Packers gained just 43 yards rushing — the lowest total in LaFleur’s tenure. The offense posted its lowest point total since a 31-0 loss to the Detroit Lions in Green Bay’s 2018 season finale.

Mason Crosby made a 39-yard field goal for the Packers’ only points. He has made 19 consecutive field-goal attempts, four shy of his own franchise record. Crosby made 23 straight from 2010-11. … Elgton Jenkins, normally a left guard, performed well in his first career start at left tackle in place of injured All-Pro selection David Bakhtiari.

Rodgers threw interceptions on back-to-back series, including one after the Packers reached the Saints 9-yard line. … Kevin King followed up his poor performance in last year’s NFC championship game by getting beaten on a 55-yard touchdown pass from Jameis Winston to Deonte Harris.

S Darnell Savage hurt his shoulder. “Hopefully with the extra day, that’ll give us an opportunity to get him back for Monday night,” LaFleur said. … TE Josiah Deguara left with a concussion. Deguara played just two games last year before missing the rest of his rookie season with a torn anterior cruciate ligament.

The good news for the Packers is that all their NFC North rivals also lost their openers. That includes the Lions, who visit Green Bay on Sept. 20.

TOP PHOTO: FILE – Green Bay Packers quarterback Aaron Rodgers (12) is his by New Orleans Saints defensive end Cameron Jordan, left, as he releases a pass during the first half of an NFL football game, Sunday, Sept. 12, 2021, in Jacksonville, Fla. (AP Photo/Stephen B. Morton)