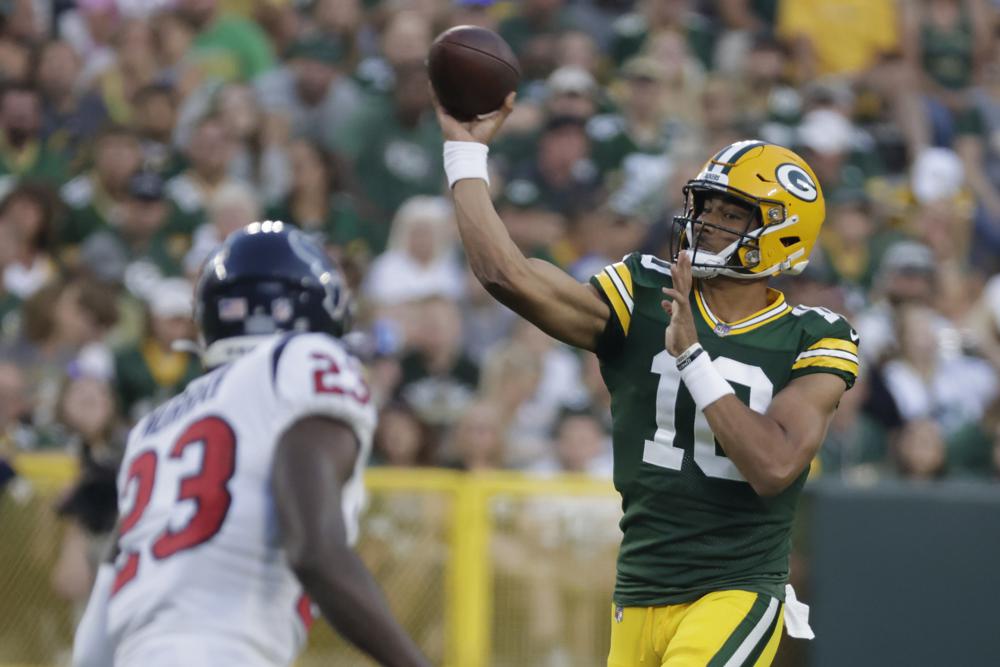 Love hurt his right shoulder late in the second quarter of a 26-7 preseason loss to the Houston Texans when Jonathan Greenard came from his blind side to sack him and force a fumble.

“I don’t want to rule him out yet, but I’d say it’s probably unlikely,” Packers coach Matt LaFleur said Thursday before a joint practice with the Jets.

If Love doesn’t play, Green Bay’s quarterbacks for the Jets game will be Kurt Benkert and Jake Dolegala, who returned to the Packers this week after getting waived on July 27. LaFleur has said he doesn’t plan to use reigning MVP Aaron Rodgers in any preseason games.

This is an important preseason for Love because he never played a down in his rookie year and didn’t even get a chance to play any exhibition games because of the pandemic. Love is expected to take over as the Packers’ starting quarterback in 2022 if Rodgers doesn’t return to Green Bay for an 18th season.

Love’s potential absence provides a showcase for Benkert, who hasn’t played a single down in an NFL regular-season game but did start the Atlanta Falcons’ final preseason game in 2018.

The opportunity is somewhat bittersweet because Benkert hoped this week would allow him to reunite with Jets assistant coach Greg Knapp, who worked with him as the Atlanta Falcons quarterbacks coach from 2018-20.

Knapp died on July 22 from injuries that occurred when he was struck by a car while riding a bicycle near his home in California. He was 58.

“Coming out of college, I was just like the gunslinger, just trying to make plays,” Benkert said. “I didn’t really play super clean. And I think he helped me blend my game a little more toward, ‘Hey, this is how you play quarterback in the NFL and then you can also mold your skillset around that, but this is like the base of what you need to know to be successful.’ And I attribute a lot of my success to him, so obviously that was really tough.

“I was talking to him that morning about this practice we were supposed to have with him, and it was tough. It was tough.”

After getting released by the Falcons this year, Benkert was working in Cape Coral, Florida, when the Packers called. He then drove all the way from his South Florida home to Green Bay and signed with the Packers on May 15.

“It was about 23 hours I think from Cape Coral to here,” Benkert said earlier this month. “We stopped all along, like Louisville and Tennessee and everywhere, all the way up the way. Me, my wife, a baby and two dogs in a Kia Telluride. It was a hell of a trip.”

Benkert, 26, played the second half of the Texans game and went 8 of 12 for 88 yards with an interception and a fumble on a botched handoff.

Dolelaga, who is 6-foot-7, spent part of last year on the New England Patriots’ practice squad. After the Packers waived him last month, Dolegala was claimed by the Patriots before getting released on Aug. 9.

They aren’t the only quarterbacks getting long-awaited opportunities Saturday.

Jets reserve quarterback James Morgan, who made his pro debut last week, frequently attended Packers training camp while growing up near Green Bay in Ashwaubenon, Wisconsin. He spent the past two days working against the Packers and now has a chance to play at Lambeau Field.

“It was definitely in a sense a dream come true for me,” said Morgan, who indicated his mom has obtained 35 tickets for the game. “It will be awesome on Saturday.”

NOTES: LaFleur said Royce Newman will start at right guard Saturday as the rookie fourth-round pick from Mississippi continues his bid to open the regular season as the starter. … Lucas Patrick, who made 11 starts at right guard and four at left guard last season, lined up as the first-team left guard with Newman at right guard for much of Thursday’s practice. Jon Runyan Jr. had been at left guard on Wednesday. … A scuffle between Packers receiver Randall Cobb and Jets defensive back Brandin Echols caused players from both teams to gather at the back of the end zone. …. The Packers introduced alternate uniforms that they will wear Oct. 24 at home against Washington. The uniforms are all green with gold numbers and stripes, making them similar to what the Packers wore from 1950-53. They include a gold helmet with no logo.