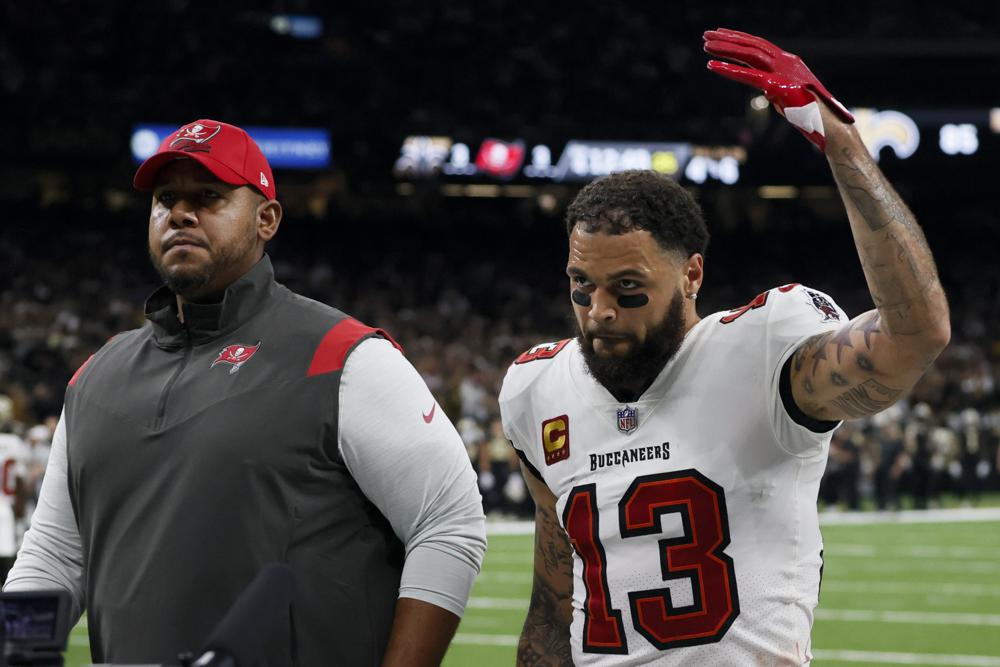 TAMPA, Fla. (AP) — The Tampa Bay Buccaneers will face the Green Bay Packers without leading receiver Mike Evans, whose appeal of a one-game suspension for his role in an on-field brawl was denied on Wednesday.

The NFL disciplined the eight-time, 1,000-yard receiver for “violations of unnecessary roughness and unsportsmanlike conduct rules” after Evans knocked New Orleans cornerback Marshon Lattimore to the ground, escalating a dust-up that began with Tom Brady exchanging words with the Saints star.

Former Tampa Bay head coach Bruce Arians also heard from the league, which investigated the melee resulting in the ejection of Evans and Lattimore, whom the Bucs felt should have been penalized for pass interference on the previous play.

An animated Arians could be seen on the sideline complaining to officials about the non-call. The Bucs have said he watched the game from the field because the Saints did not provide a skybox for him and general manager Jason Licht.

“Like I’ve said, he’s normally upstairs. This is the one time he was downstairs,” said coach Todd Bowles, who was promoted from defensive coordinator to head coach when Arians retired and became a senior assistant to Licht.

“Usually we handle our sideline pretty good,” Bowles added. “Everybody got irate. We’ve got to have better composure on the sideline as players and coaches.”

The confrontation between Brady and Lattimore escalated when Bucs running back Leonard Fournette shoved the Saints cornerback, who in turn shoved Fournette before Evans intervened and knocked Lattimore to the turf.

While Evans and Lattimore were both ejected, Lattimore wasn’t suspended.

Bowles didn’t have much to say about Evans losing to his appeal.

“It hasn’t changed since the other day. Sunday’s going to come whether he plays or not, and we’ve got to get ready to play without him,” the coach said.

It’s the second time Evans will serve a one-game suspension for confronting Lattimore. In 2017, the receiver leveled the cornerback with a blindside hit while Lattimore was engaged in a heated exchange with then-Tampa Bay quarterback Jameis Winston.

Evans is the only receiver in NFL history to begin a career with eight consecutive seasons with at least 1,000 yards receiving. His 76 touchdown catches are the most by any player since he entered the league in 2014.

TOP PHOTO: Tampa Bay Buccaneers wide receiver Mike Evans leaves the field after being thrown out of the game against the New Orleans Saints during the first half of an NFL football game in New Orleans, Sunday, Sept. 18, 2022. (AP Photo/Butch Dill)