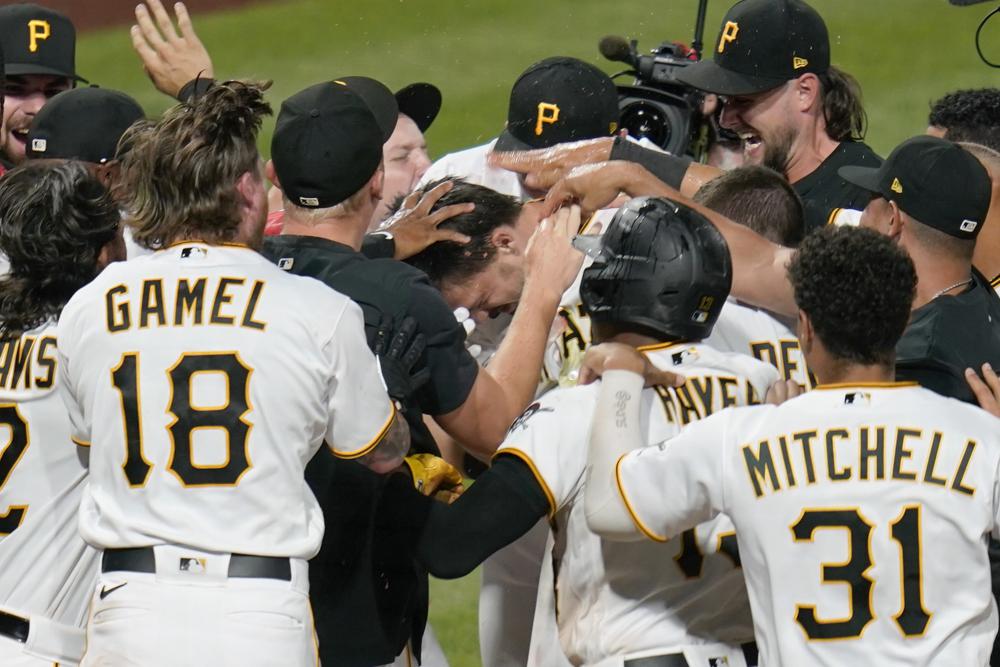 PITTSBURGH (AP) — Bryan Reynolds hit a solo homer to lead off the bottom of the ninth inning, powering the Pittsburgh Pirates to an 8-7 win over the Milwaukee Brewers on Wednesday night.

Facing a 2-0 count, Reynolds sent a fastball from Devin Williams (2-1) 425 feet to right-center field for a lead-off blast. Reynolds’ 16th homer of the season and first walk-off in the majors ended a drought of 15 games since he hit three against the Washington Nationals on June 26.

“I walked up to the plate telling myself, ‘This probably isn’t a guy you’re hitting a home run off of, so just try to get him in the zone or maybe he’ll walk you,’” Reynolds said. “I got to a good count and he threw me a heater. … To hit it off a guy like that is really cool. Back-and-forth game, too.”

It was Williams’ first home run allowed in 44 games this season, ending a streak of 30 consecutive appearances without allowing a run since giving up three to the Cincinnati Reds on May 10.

“An inning is an inning, you know what I mean? Doesn’t really matter to me,” Williams said of the streak ending on a walk-off. “He put a good swing on it. It is what it is.”

Wil Crowe (4-6) struck out one without allowing a hit in the final 1 1/3 innings for Pittsburgh.

Willy Adames had four RBIs for the NL Central-leading Brewers, the final two coming on a two-out single in the eighth that cut into a three-run deficit. Rowdy Tellez then sent an RBI single down the line in right, tying it at 7.

“It was a crazy game,” Milwaukee manager Craig Counsell said. “We weren’t able to keep some runs off the board, weren’t able to capitalize on some opportunities earlier in the game. Had a great eighth inning to tie it up with some big hits and some great at bats.”

Taylor Rogers, acquired as part of a trade that sent closer Josh Hader to the San Diego Padres on Monday, struck out one and walked one in the eighth for the Brewers.

After Ke’Bryan Hayes gave the Pirates a 5-4 lead with an RBI single in the seventh, Oneil Cruz followed by driving a sinker from Brent Suter 434 feet to right-center. The two-run homer, the eighth in 36 games for the 23-year-old, came after he had a three-run shot in the sixth inning of a 5-3 win Tuesday.

“It was really loud coming off his bat,” Pittsburgh manager Derek Shelton said. “Once he hit it, it was just about where it was going to land. To do it left-on-left like that, first pitch, being ready to hit. … A good night for the kids. They played well, they did a lot of good things, and it was exciting to see.”

The Pirates fell behind 4-0 in the second when starter Tyler Beede gave up a two-run double to Adames. Beede was replaced after 1 1/3 innings by Dillon Peters, who allowed an RBI single by Tellez.

Brewers starter Freddy Peralta surrendered a two-run double to Hayes, cutting the lead in half in the third of the right-hander’s return from a lat strain. Pitching for the first time since May 22, Peralta gave up two runs on four hits and 67 pitches (41 strikes) in 3 2/3 innings.

“I felt great,” Peralta said. “Good, strong. I wanted to keep pitching. … You could tell in the third inning, when I was having a little stress in that inning. But I was able to finish that inning. I felt good about it.”

Michael Chavis hit a double down the right-field line, scoring Cruz from first to cut Milwaukee’s lead to 4-3 in the sixth. Tucupita Marcano tied it with a single, his third hit after being recalled from Triple-A Indianapolis earlier in the day.

“Using six (pitchers), getting down 4-0, coming back, giving it back up,” Shelton said. “Yeah, exactly how we drew it up.”

Brewers: RHP Dinelson Lamet and C Pedro Severino were designated for assignment. Lamet was acquired from the San Diego Padres as part of a package for closer Josh Hader on Monday. … RHP Peter Strzelecki was optioned to Triple-A Nashville.

Brewers: C Omar Narváez exited in the eighth with a quad strain. He will not be available Thursday, when he will be reevaluated.

Pirates: RHP David Bednar (low back inflammation) was placed on the 15-day injured list retroactive to July 31. … C Tyler Heineman left after the fourth inning with right groin discomfort. … INF Kevin Newman is day-to-day after getting his right hand stepped on in a rundown in the seventh, Shelton said.

RHP Brandon Woodruff (9-3, 3.55 ERA) will take the mound for the Brewers against Pirates RHP Zach Thompson (3-8, 5.09) in the finale of the three-game series on Thursday afternoon. Woodruff has allowed more than two earned runs once in his past nine starts. Thompson has given up seven runs in each of his past two starts.

TOP PHOTO: Pittsburgh Pirates’ Bryan Reynolds, center, is surrounded by teammates at home plate as he celebrates a game-ending home run against the Milwaukee Brewers in the ninth inning of a baseball game Wednesday, Aug. 3, 2022, in Pittsburgh. The Pirates won 8-7. (AP Photo/Keith Srakocic)