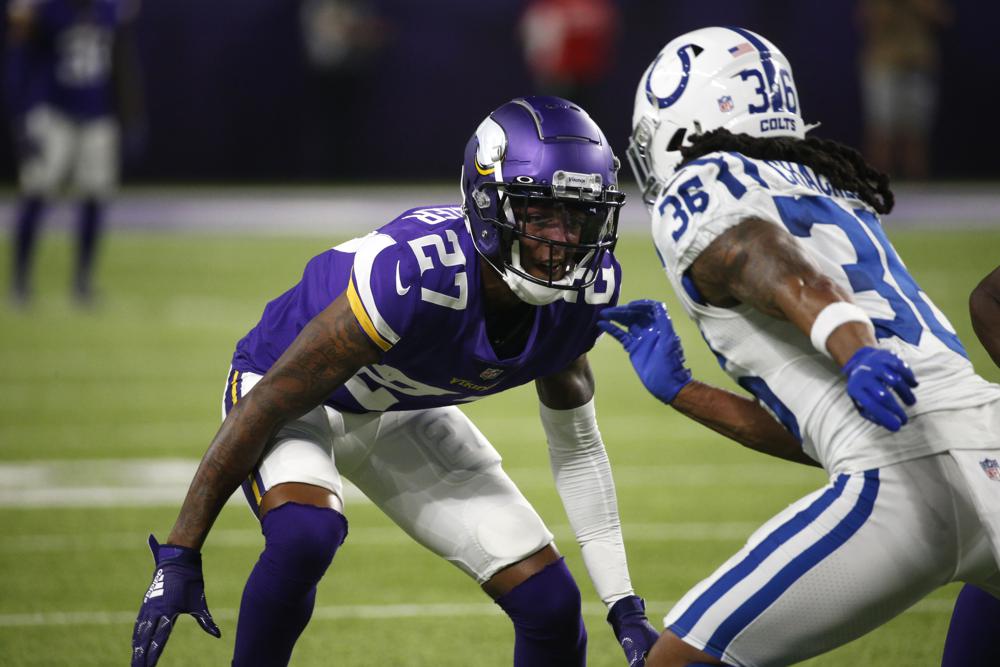 EAGAN, Minn. (AP) — Cameron Dantzler was the most obvious party to perhaps the lowest moment of last season for the Minnesota Vikings, when he backpedaled too deep in the end zone in Detroit and let the Lions complete the game-ending touchdown pass right in front of him.

Dantzler has had at least as many downs as ups over his first two years, and now his starting spot has been threatened by a second-round draft pick in Andrew Booth Jr.

Nonetheless, the lanky hard hitter who drew the nickname “The Needle” in high school in Louisiana has returned for 2022 with an ample supply of determination, maturity and motivation to show the Vikings and the rest of the NFL that he can be a reliable part of the lineup for seasons to come.

“Just doing whatever helps the team. If me not starting helps the team win, then I’m OK with it. I’m a team-first guy. Booth, he looks pretty good. He brings a lot of juice to the secondary. I know that part,” Dantzler said.

After a standout training camp as a rookie in 2020, the third-round selection from Mississippi State earned a starting spot and had flashes of success. Listed at 6-foot-2 and just 190 pounds, Dantzler missed five games to a variety of injuries (rib, hamstring, concussion).

He was hurt again in another setback during spring 2021 practice (quadriceps). While he didn’t miss any games to injury he was a healthy scratch for the opener after falling out of favor of head coach Mike Zimmer and the defensive staff.

“It was kind of a bumpy road. I feel like Year 3 will be my best year. I’m more confident than ever. Picked up weight. Did everything I needed to do this offseason to get better,” Dantzler said.

During practice on Monday, Dantzler was beaten by K.J. Osborn for a 30-yard touchdown pass in a full-team 2-minute drill. So the learning curve has yet to completely flatten. But to hear his coaches and teammates tell it, Dantzler has come a long way from the struggles of last fall.

“He’s working with a new slate with a new coaching staff. I believe he’s more dialed in. He doesn’t have the outside noise, and you can tell,” cornerback Patrick Peterson said. “I’m proud as heck of him. You can tell he was willing to take that next step throughout the offseason.”

Peterson, who in his 12th season in the league is the only sure bet for the Vikings at this vital position, has spent plenty of time with Dantzler and the other youngsters since arriving as a free agent last year. Peterson’s strongest impact this offseason on Dantzler was to teach him how to study opponents in a deliberate manner that can carry over to the field in a more meaningful way.

“He taught me a lot on how to break down film, how to make the game slow down,” Dantzler said.

After switching his jersey number from 27 to 3, which he wore in college, Dantzler has visual evidence of the fresh start.

Far more poignantly and painfully, he also has the memory of his former teammate, Jeff Gladney, to guide him this season. Gladney, who was in Dantzler’s draft class and played for the Vikings in 2020 before being released amid off-the-field trouble, died in a car crash earlier this year after signing with the Arizona Cardinals.

Dantzler reported to camp last week carrying Gladney’s No. 22 jersey and said he has dedicated the season to his late friend. He spoke with Gladney two days before his death and had planned to visit him in the Dallas area soon after the crash.

“I know he would love to be back out there,” Dantzler said. “Everything I do this year is for him.”

TOP PHOTO: FILE – FILE – Minnesota Vikings cornerback Cameron Dantzler (27) defends against Indianapolis Colts’ Andre Chachere (36) during the first half of an NFL football game Aug. 21, 2021, in Minneapolis. Dantzler has had at least as many downs as ups over two years at cornerback for the Vikings, and his starting spot has been threatened by a second-round draft pick in Andrew Booth Jr. (AP Photo/Bruce Kluckhohn, File)

0
0   0
previous First look at overhauled, Hader-less bullpen Tuesday when Brewers head to Pittsburgh
next Russell was a champion of activism before winning NBA titles
Related Posts