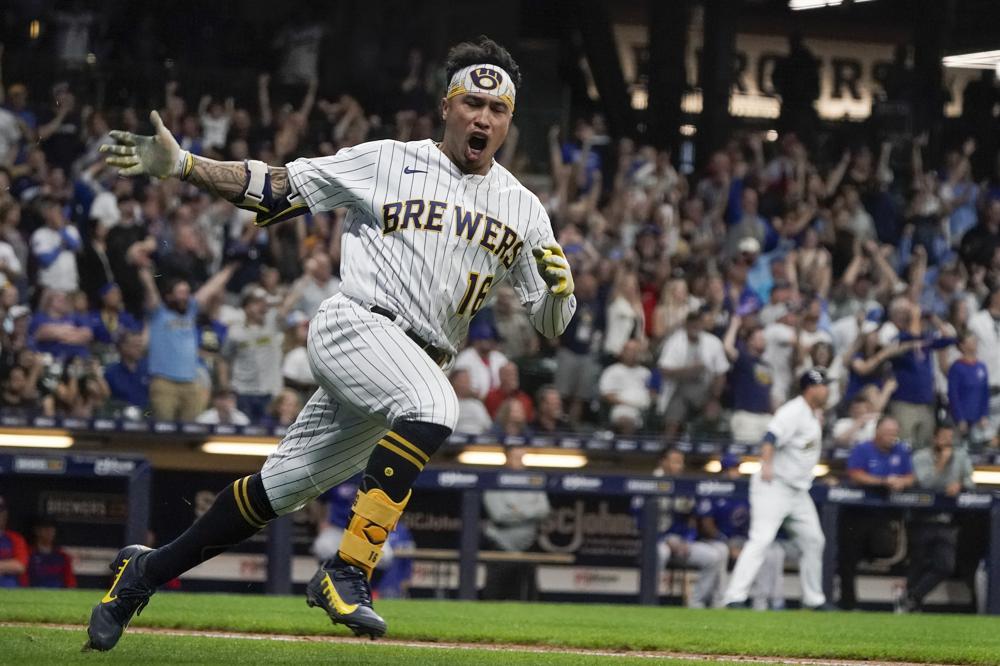 MILWAUKEE (AP) — Kolten Wong and the Milwaukee Brewers moved a step closer to clinching the NL Central title by continuing their season-long domination of the Chicago Cubs.

Wong hit a tiebreaking, two-out single during a four-run rally in the eighth inning as Milwaukee beat the Cubs 8-5 on Friday night.

Bob Uecker on the call, Corbin Burnes on the mound, off his no-hitter, as the Brewers look to sweep Cubs.
Tune into WKTY with pregame at 12:35 p.m. Sunday.

“We want to get that Central crown,” Wong said. “That NL Central crown is something we’ve talked about since spring training. We’ve believed in each other since spring training, even though people were counting us out. This is something we’ve been pushing for. We’ve been grinding. The boys want to win it. We all want to clinch it here at home. That’s a big thing for us.”

Milwaukee beat the Cubs for the 10th straight time. The Brewers’ only longer winning streak over a single opponent came in 2008 when they won 12 in a row against Pittsburgh.

“Obviously, we know what kind of team they have right now, a bunch of young guys who are hungry, trying to compete and win spots for next year,” Wong said. “It’s always tough when you’re playing these guys. They feel the rivalry going on, too. The young guys are out there competing and giving it their all, so we have to make sure we match that effort.”

One night after blowing a 7-0 lead in a 17-8 loss to Philadelphia, the Cubs squandered an early 4-0 advantage. Relief pitcher Rowan Wick (0-1) gave up four runs, three hits and two walks during the Brewers’ eighth-inning rally.

“What did we have, nine walks tonight?” Cubs manager David Ross said. “Just in general, we’ve got to not give free passes.”

The Brewers trailed 5-4 in the eighth until Lorenzo Cain tied the game with a two-out single to right that brought home Luis Urías, who had reached on a one-out single and advanced to second on Daniel Vogelbach’s two-out walk.

Pablo Reyes, who ran for Vogelbach, headed to third on Cain’s single and barely made it ahead of right fielder Trayce Thompson’s throw.

After Luke Maile walked to load the bases, Wong hit a 3-2 pitch into center to bring home Reyes and Cain. Dillon Maples replaced Wick and threw a wild pitch that allowed Maile to score from third.

“We had an inning that we’ve had a bunch this year in the eighth, where guys just keep getting on base and we string together a bunch of good at-bats,” Brewers manager Craig Counsell said.

Urías went 2 for 3 and drove in three runs for the Brewers. Frank Schwindel hit a solo shot for the Cubs, the first homer Brewers starter Adrian Houser had allowed since June 26.

Aaron Ashby (3-0) struck out five and allowed three hits in three innings of shutout relief. Josh Hader worked the ninth for his 32nd save in 33 opportunities.

Alfonso Rivas and Sergio Alcantara hit RBI singles during a four-run outburst in the fourth inning that enabled the Cubs to break a scoreless tie. The Brewers scored three in the bottom half.

Chicago extended the lead to 5-3 in the fifth on Schwindel’s homer. The Brewers answered in the bottom half as Urías drew a bases-loaded walk from Codi Heuer.

Cubs: RHP Manuel Rodriguez went on the 10-day injured list with right shoulder inflammation, likely ending his season. Rodriguez is 3-3 with a 6.11 ERA in 20 relief appearances.

Brewers: Counsell said the Brewers are hoping OF Avisaíl García can return to action Saturday and that SS Willy Adames can be activated Monday. García hasn’t played since Tuesday due to back trouble. Adames went on the injured list Sept. 5 with a left quadriceps strain.

Burnes pitched the first eight innings and Hader worked the ninth in a 3-0 victory Saturday at Cleveland that marked the second no-hitter in Brewers history. Juan Nieves threw one against Baltimore on April 15, 1987.