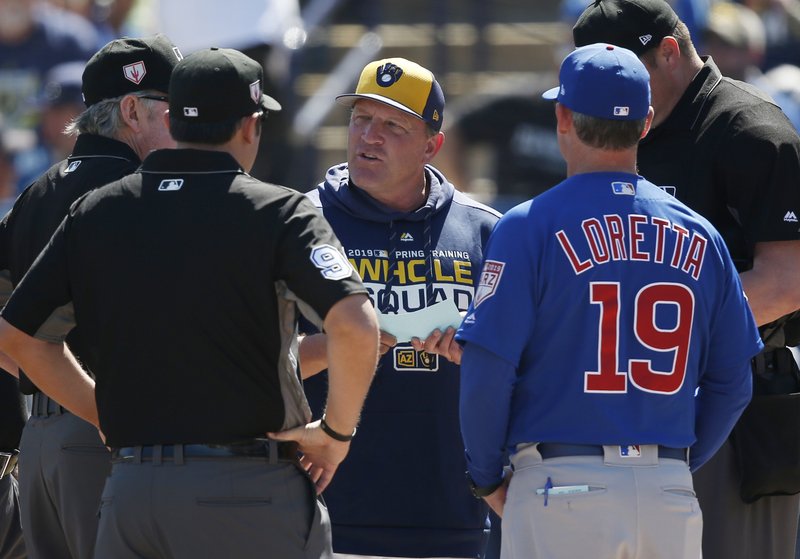 MILWAUKEE (AP) — Milwaukee Brewers bench coach Pat Murphy suffered a heart attack during a Saturday team workout at Miller Park, but team officials said he was resting comfortably and should be out of the hospital later this week.

Brewers general manager David Stearns said the 61-year-old Murphy received a stent and is expected to get released from Froedtert Hospital “in a couple of days.” Stearns said it was too early to estimate when Murphy might be back in uniform.

“The prognosis for a recovery is good, and Pat is certainly going to be back in the dugout at some point,” Stearns said Sunday. “I could not venture to guess as to when that is. Right now the most important thing for Pat is to focus on his recovery and health. We’ll let him focus on that.”

Stearns said that Murphy started experiencing symptoms while on the Miller Park field and reported them to the team’s medical staff, which immediately realized the gravity of the situation and called an ambulance. Stearns says the ambulance arrived “in a matter of minutes” and transported Murphy to Froedtert Hospital, which had a team of cardiologists waiting for him.

“This is an outcome here where everyone did the right thing,” Stearns said. “Pat reported his symptoms. Our medical staff immediately identified what was going on and the folks at Froedtert did an incredible job of facilitating his entry immediately and getting him the care he needs.”

Murphy is beginning his fifth season as the Brewers’ bench coach under manager Craig Counsell, who played for him at Notre Dame from 1989-92. Murphy posted a 42-54 record as the San Diego Padres’ interim manager in 2015 after the firing of Bud Black.

“The good news is Pat is well, he’s resting comfortably, he will recover and he’s going to have the full support of the organization as he goes through this,” Stearns said.

The Brewers are scheduled to play their home opener Monday against the Chicago White Sox after their three-game weekend series with St. Louis was postponed because multiple Cardinals tested positive for the coronavirus.

Milwaukee will play that game without two-time All-Star outfielder Lorenzo Cain and former NL MVP Ryan Braun. Cain announced Saturday he was opting out of the remainder of the season, and Braun was placed on the injured list Sunday due to an infected right index finger.

TOP PHOTO: FILE – In this March 10, 2019, file photo, Milwaukee Brewers bench coach Pat Murphy, center, talks with Chicago Cubs bench coach Mark Loretta (19) and the umpires before a spring training baseball game in Phoenix. Murphy suffered a heart attack during a Saturday, Aug. 1, 2020, team workout, but team officials said he was resting comfortably and should be out of the hospital later this week. (AP Photo/Sue Ogrocki, File)

0
0   0
previous NBA fines Smart $15,000 for comments about foul on Giannis
next Karofsky sworn in to Wisconsin Supreme Court in midst of 100-mile ultra-marathon
Related Posts