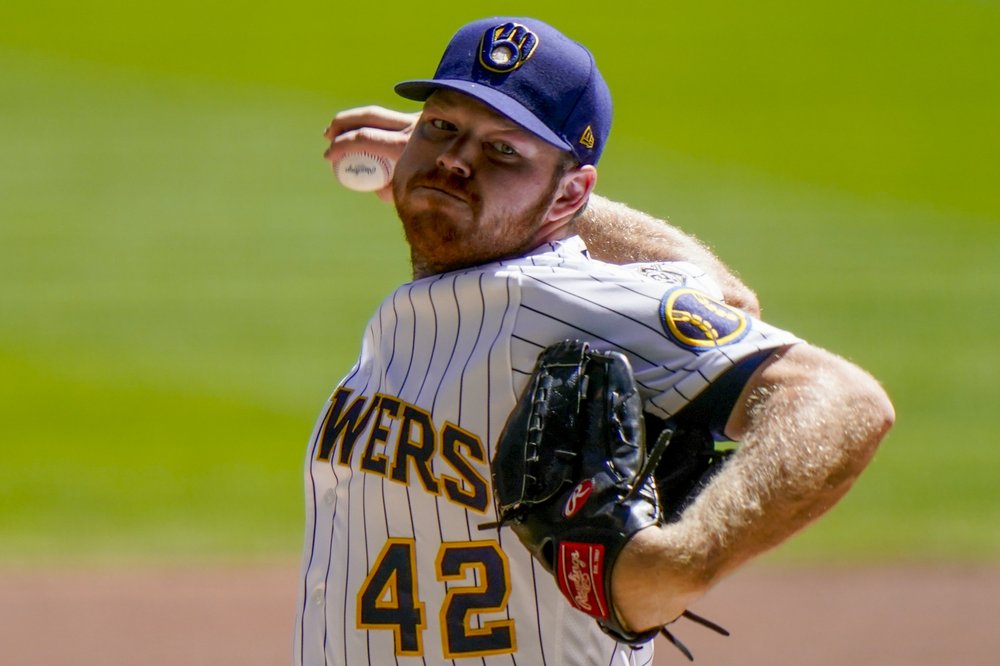 MILWAUKEE (AP) — Pittsburgh Pirates slugger Josh Bell has joked for years during batting practice at Miller Park about hitting the promotional vehicle parked well above the wall in right-center field.

Bell finally did it Sunday. His towering shot in the fourth inning put the Pirates ahead for good in a 5-1 victory over the Milwaukee Brewers.

“I know I’ve been trying to hit that for three years now,” Bell said. “That’s a first. You’ve got to get it really high, so it’s tough to do in batting practice.”

It’s even tougher to do in a game that counts against Brandon Woodruff, who had gone 10-0 with a 2.89 ERA in 16 home starts over the past two seasons.

Yet Bell pulled it off.

His blast hit the hood of the promotional SUV located below the Miller Park scoreboard and to its right. The Pirates were in town last year when former Brewer Mike Moustakas hit a Toyota RAV4 in the same location, enabling a fan to win the prize.

The promotion only applies to homers hit by Brewers, so nobody won a free car after Bell’s shot. That didn’t stop the Pirates from joking about the possibilities after the game.

“You don’t want that one because it’s probably got a huge dent in it at this point,” Pirates starter Steven Brault said. “That ball was absolutely crushed.”

The homer continued the recent resurgence for Bell, a 2019 All-Star who arrived in Milwaukee on Friday with a .190 batting average and just one homer all season. He has gone 5 of 10 in this series and has homered in back-to-back games.

“It seemed like at times you could throw me a ball right down the middle, and I was mis-hitting it into the ground,” Bell said. “It doesn’t seem like that’s the case right now, so I’m just going to try to stay with where I’m at.”

Bell’s big shot allowed him to redeem himself after a defensive miscue.

Pittsburgh’s Gregory Polanco had opened the scoring with a homer in the second inning. Milwaukee tied it with an unearned run in the third when Keston Hiura’s two-out single brought home Luis Urias after Bell committed an error at first base earlier in the inning.

Bell responded in the top of the fourth with his two-run blast off Woodruff (2-3). The right-hander struck out seven but allowed four runs, four hits and three walks in five innings.

“This was probably one of the better games I’ve thrown this year, and to come out of it still giving up four runs is one of those things that completely blows my mind,” Woodruff said. “I don’t understand it. Sometimes, baseball just gets you. There were two pitches I wish I could have back. I didn’t locate one well enough to Josh Bell, and the one to Polanco wasn’t necessarily the wrong pitch, I just left it up in a spot for him to handle.”

Pittsburgh extended its lead on RBI singles by Kevin Newman in the fifth and Adam Frazier in the seventh.

Milwaukee left 13 men on base and went 1 of 9 with runners in scoring position. The Brewers’ best shot at a rally came in the seventh.

After retiring the first two batters of the inning, Tropeano walked Jedd Gyorko and hit Ryan Braun with a pitch. Geoff Hartlieb plunked Hiura to load the bases before striking out Justin Smoak to end the threat.

This represented Woodruff’s last start before he heads back to his Mississippi home as his wife, Jonie, prepares to give birth to their first child. Jonie is scheduled to be induced Tuesday.

The Pirates faced a similar situation, as they put outfielder Bryan Reynolds on paternity leave Sunday and activated Will Craig.

Pirates: Manager Derek Shelton said pitcher Joe Musgrove has thrown a live batting practice and will have another side session before getting re-evaluated when the team returns to Pittsburgh. Shelton said pitcher Mitch Keller has thrown off the mound twice. Musgrove (0-3, 6.75 ERA) went on the injured list Aug. 11, retroactive to Aug. 9 with right triceps inflammation. Keller (1-1, 3.52) has been on the injured list since Aug. 2 with an injured left oblique.

Brewers: Pitching coach Chris Hook says reliever Corey Knebel has thrown off the mound a couple of times. Hook wouldn’t speculate on whether the Brewers expect him back this season. Knebel (0-0, 9.45) went on the injured list Aug. 20 with a left hamstring issue. … Brewers manager Craig Counsell said outfielder Avisail Garcia was unavailable Sunday and is day to day. Garcia hurt his ankle in a 7-6 victory Saturday.