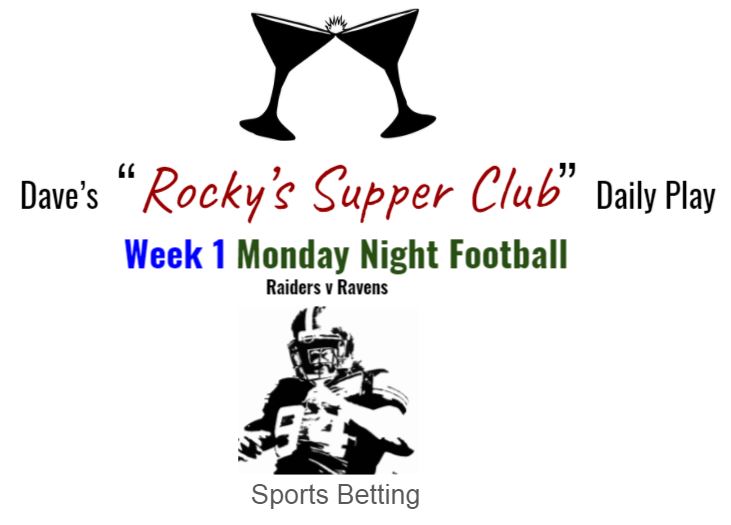 Allegiant Stadium in Las Vegas was open last year as the Raiders relocated to Sin City, but fans weren’t as COVID-19 shuttered most all NFL stadiums to their fans.

This year, we’re back to full capacity crowds and the “Death Star” is going to be rocking for the Raiders and Ravens on Monday Night Football. The Ravens have been holding steady as the betting favorites (-4) at most shops, even with the recent rash of ACL injuries that have hit Baltimore hard, and the total is sitting at 51.

Jon Gruden enters Year 4 of his massive contract looking to make the playoffs for the first time in his second stint with the Raiders. The offense has not been the problem in Gruden’s disappointing tenure, as the Raiders were in the top 10 last year in scoring and total offense. But the defense allowed the third-most points in the league, giving up 29.9 on nearly 400 yards per game.

There’s a lot to like when looking at the Ravens’ profile. They led the NFL by a wide margin last year in rushing yards at 192 per game, allowed the fewest points in the league and finished ninth in scoring on offense. They are 25-7 in Lamar Jackson’s two full seasons as the starter, but that success has not translated to the playoffs, as they have only one postseason win and have not made it past the divisional round. This line has not moved much. It opened with the Ravens as 4.5-point favorites and is currently at 4, with a total of 51.

After winning a trio of exciting shootouts against the Saints, Chiefs, and Panthers early last season (64.7 PPG), Derek Carr and the Raiders returned from their Week 5 bye boasting incredibly high expectations heading into the final three-fourths of the year.

The Raiders experienced some debilitating turnover issues towards the end of the year though, considering Vegas finished the season ranked 27 th in giveaways per game (1.6) – primarily thanks to Carr and company’s 17 turnovers across their final seven contests.

On the other hand, after stumbling out to a somewhat frustrating start to the season (6-5), the Ravens quickly cleaned things up in the weeks leading up to last year’s playoffs, as Baltimore ended up winning six straight games before falling to Buffalo in the second round of the postseason (17-3) – and turned the ball over one time or less in all seven of those events.

I’m tempted to side with Baltimore on the road here, as I still think the Ravens will ultimately win Monday Night’s event – but losing a Pro-Bowl corner, like Peters, just a few days before kickoff could cause a ripple effect throughout Baltimore’s entire secondary, and that slightly worries me ahead of this matchup.

MY TAKE on tonight’s game:

I love the Raiders (+4) in this game. I don’t think it’s a stretch to say the Ravens are hurting right now and the Raiders are going to be PUMPED to have fans in attendance at Allegiant Stadium.

I understand why the Ravens are favored but I really do think the Raiders jump all over this one, take advantage of the crowd’s energy and the depleted Ravens running attack in a win.

The total of 51 is tricky, but I’m ok with taking the OVER on this as well as Las Vegas has gone OVER the point total in seven of its last eight home games.