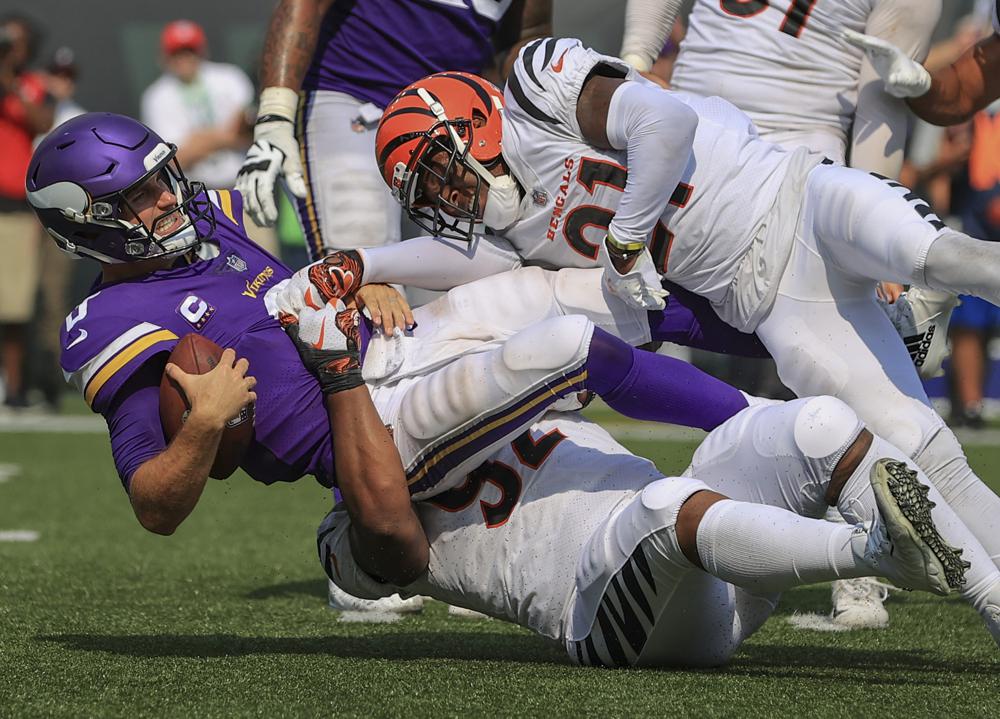 EAGAN, Minn. (AP) — The Minnesota Vikings wore purple jerseys and white pants for their season opener. The yellow flags were an unplanned and unwelcomed accessory.

Nothing will spoil a game quite like recurring penalties, and the Vikings ultimately sealed their demise in Cincinnati with a bad rash of early infractions. They were flagged 16 times during the 27-24 overtime defeat, all but two by the offense. Twelve of them were accepted by the Bengals, totaling 116 yards.

“If we play clean football, we can move the ball all day,” wide receiver Adam Thielen said. “But when you start drives first and 20, second and 20 … you can’t win football games doing that.”

Nothing will hinder a rookie play-caller quite like recurring penalties, either, as new offensive coordinator Klint Kubiak found out. The Vikings had 16 third down plays, nine of which needed 10 yards or longer to move the chains. Six of them were third-and-15 or more.

“Some of the longer-yardage situations we had made things tough on several of the drives,” quarterback Kirk Cousins said.

There were some developments on Sunday that warranted optimism for Minnesota, starting with performances by the three other NFC North members in their intraconference games.

Chicago, Detroit and Green Bay lost by a combined 63 points. This was only the fourth time in 20 seasons under the league’s current alignment that all four teams in a division lost their opener, the first such instance since the AFC North did so eight years ago.

The revamped defense on display also looked more like the units coach Mike Zimmer fielded prior to the collapse in 2020, save for a blown coverage here or a missed tackle there. Zimmer was far more critical on Monday of his own play calls than anything the defense did or didn’t do, sounding downright sanguine about his team’s outlook despite the early setback in a pivotal season.

“I think we still have a chance to have a really good team. I know we didn’t show it really in all three phases the other day, but there’s a lot of things I see that are pretty darn good,” Zimmer said.

The pass rush was back in prime form with five sacks of Bengals quarterback Joe Burrow, the third most of any NFL team on opening weekend. New nose tackle Michael Pierce had two of them, making an instant impact at an area of weakness in 2020. Defensive end Danielle Hunter had one in his return from missing last year with a neck injury and said he surprised himself with how sharp his conditioning was.

“All the players on the other team were telling me it’s good to have me back on the field and all that,” Hunter said. “It’s a good feeling.”

Setting aside the penalty problem that could well wind up as a first-week fluke, the offensive line was too often overpowered in crucial pass-blocking situations and didn’t consistently create paths for Dalvin Cook when the ball was on the ground.

During a steamy afternoon with 49 pass plays called over what wound up as a 70-minute game, the Vikings sure gave their front five a stiff challenge. Still, all three sacks of Cousins came from the inside, two against left guard Ezra Cleveland and one on center Garrett Bradbury. Interior protection has been a problem for the past few seasons.

New specialists Greg Joseph and Jordan Berry were solid in their first games in purple. Joseph made all three extra points and his only field-goal try, a 53-yarder on the final play of regulation to force overtime. Berry punted eight times for a gross average of 50.3 yards, including a 63-yard boot in overtime that got the Vikings out of field position trouble. Zimmer said the Vikings are seeking more hangtime on Berry’s punts to maximize their downfield coverage.

Bashaud Breeland had a rough debut for the Vikings at cornerback, targeted often by Burrow including the backbreaking 50-yard touchdown pass to rookie Ja’Marr Chase late in the second quarter when he was the closest man in coverage.

Prior to that, Breeland took a 26-yard pass interference penalty that set the Bengals up for their first score. He also missed a few stretches while he had a minor shoulder injury treated. Zimmer said he’d like more consistency from the eighth-year veteran but otherwise wasn’t worried.

“Once he settled down, I thought made some really good plays in the running game,” Zimmer said.

Linebacker Anthony Barr did not play against the Bengals because of the nagging knee injury that sidelined him for much of training camp, and while Zimmer said Friday that Barr was close to being cleared, his absence was capably overcome by newcomer Nick Vigil. Vigil had 10 tackles, including a 10-yard sack, while playing every snap at Barr’s strong side spot.

Rookie left tackle Christian Darrisaw was also inactive with an injury, on the slow road back from a second groin-area surgery this year, so he’s won’t be able to help the offensive line anytime soon.

The pass protection — and the willingness of Cousins to move around in the pocket and throw the ball more quickly — must be better for the Vikings to get their first victory. They visit Arizona this Sunday. Chandler Jones had five of the six sacks by the Cardinals in a resounding road win at defending AFC South champion Tennessee.