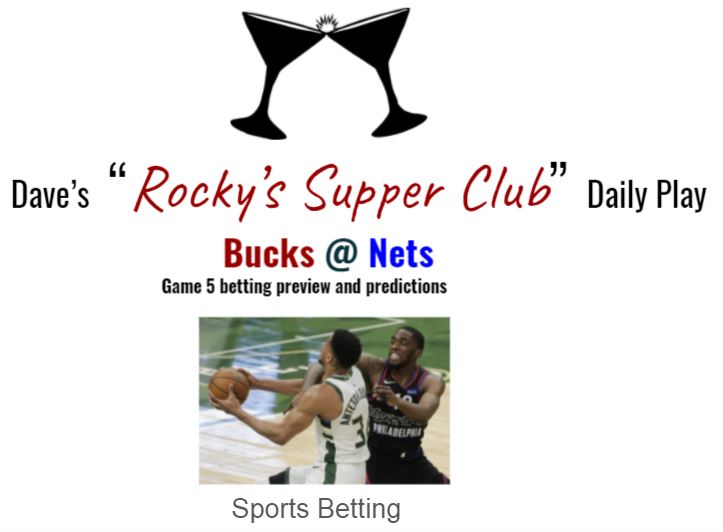 Tonight on WKTY Game 5 of the Bucks / Nets series, back in Brooklyn, will see the Nets face their toughest test of the post season so far, and will give the Bucks their best chance to exert control and take home court advantage. Kyrie Irving and James Harden have both been ruled out.

That is a DEVASTATING blow for the Nets, and about as good of news as the Bucks could have hoped for.

When Milwaukee came out of the gates firing in Game 3, and took a commanding 30-11 lead before nearly surrendering it all in an 86-83 win, you could feel the Bucks take a sigh of relief, knowing that after the utter embarrassment of Game’s 1 and 2, they at least wouldn’t be swept.

In Game 4 the Bucks were down 3 at the end of the first quarter, but in the 2nd, Kyrie Irving injured his ankle coming down on Giannis’s leg and was forced to leave the game and would not return. That’s when the Bucks, smelling blood, began to pile on high and deep and took a 5 point lead into the break.

As the second half began, the Bucks seemingly had an extra bounce in their step and began to truly pull-away from the Nets, outsourcing Brooklyn by 7 in the 3rd, and holding on for a 107-96 win. Kevin Durant who had been nothing short of brilliant in Games 1 and 2 was harassed and hurried on every possession thanks to the dogged D of P.J. Tucker and Jrue Holiday and was limited to 28 points on 25 shots….missing all but one of his seven three point attempts.

With Milwaukee’s series tying win, and the effective shut-down of Durant after Kyrie left, the blueprint seems set for how the Bucks will need to play in tonight’s Game 5 to beat Brooklyn, which is exactly what I see happening, and why I jumped all over the Bucks (-2 ½) yesterday when it opened.

Unfortunately for you, if you didn’t jump on that yesterday as well, the number has been bet up to the Bucks (-4), but I still think there’s good value in that number. As a matter of fact, our Sports Betting insider Jon Denton said on the program this morning, he’d take the Bucks minus money all the way up to (-5).

Below you’ll find all the current action (as of this writing) and how you can play this game. I’ve also included my predictions. Enjoy this one Bucks fans, and remember to NEVER make your plays solely on my information. Follow your research, stay in your lane, and NEVER bet more than you’re comfortable LOSING….

This game opened with the Bucks just favored to win by two (-2) but with Irving and Harden both ruled out has moved to (-4).

Bucks are 6-1 ATS in their last 7 games vs. a team with a winning straight up record.

Bucks are 4-1 ATS in their last 5 playoff games as a favorite.

The Moneyline play here is a bit too rich for my blood at -175, however, if you’re not one for sweating out a point spread and want to just bet on the Bucks to win, make this play