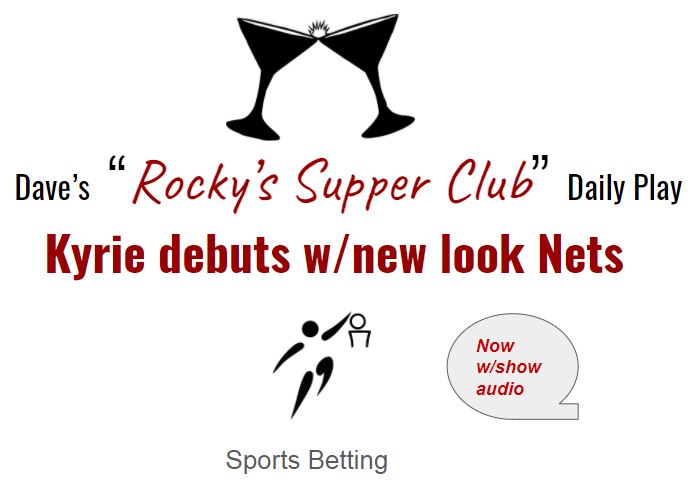 How did I get here?: The Ohio State Buckeyes vs Purdue last night, not turning out like I thought it would.

Yesterday I took OSU (-4.5) vs a Purdue team who plays great D, but struggles to score, and felt strongly about the Buckeyes recent successes against very good teams. One thing did hold true, Purdue played great D and held the 3rd ranked scoring offense in the Big TEN to just 65 points in a 67-65 win.

Purdue did exactly what they wanted to against the #15 Buckeyes, and Ohio State just couldn’t respond the same way they had in their previous three games against ranked Illinois and Rutgers teams, and against a tough Northwestern club. Kudos to Purdue for playing such a sharp and focused game, and shame on me for not seeing that coming.

What’s on the table today?: Back to the NBA for the return of Kyrie Irving to the Brooklyn Nets after missing eight games, “because he just needed a pause”.

The Nets on Monday got the best of the Bucks 125-123 in James Harden’s second game with the team. Harden was the first player in NBA history to record a 30+ point triple double in his debut with a new team, going for 32, 14, 12 in a win over ORL. Against the Bucks Harden was once again lethal going for 34 and dishing out 12 assists, but it was Kevin Durant and his 30 points, including a game clinching bucket, that killed Milwaukee.

On Monday the Nets announced they were a REALLY good team, even without Kyrie, and now look to reset the balance of power away from the Bucks in the East, and establish themselves as the dominant team. Their next step in that journey is tonight versus the Cleveland Cavaliers.

The Cavs opened the season with a surprising 3-0 start but since have struggled winning just 3 games in their past 10 outings. Cleveland is also having a host of internal issues and will possibly cut, if they can’t trade, last years 1st round pick Kevin Porter Jr. after Porter engaged in a reported screaming match with team officials over the placement of his locker. This is NOT how new head coach JB Bikerstaff wanted to start his tenure with the Cavs at all.

When the line for this game opened, (off-shore), had the NETS as a nine point favorite (-9). As of the writing of this article Brooklyn is sitting at (-10) thanks to news that Kyrie will in fact be playing tonight. Fortunately for me, I took this game early this morning and got the NETS (-9) vs CLE.

As mentioned above Brooklyn is looking to establish something here, they’re looking to show off their new toys, and unfortunately the Cavs are going to be at the business end of this stick. The Nets should blow Cleveland out tonight…big time.

Finally, when I looked at how these two teams were performing ATS (against the spread) recently, I see that the numbers are also heavily favoring the Nets to cover this game tonight against a Cavs team that is young, led by a new head coach, playing poorly, and experiencing some issues internally that never bode well for on-court play. NETS (-9).