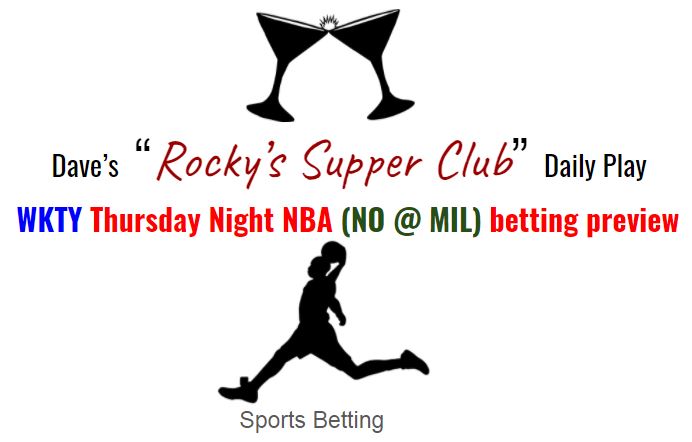 Tonight’s match-up features two teams that swapped players this offseason, have met once already, and showcase two of the NBA’s hottest stars. If I would have told you five years ago that it was the Milwaukee Bucks and New Orleans Pelicans, you’d probably have thought about Anthony Davis and Jabari Parker. Both of those guys are gone, but a new crop of dynamic stars in two of the league’s smallest markets are here, and they both go by one name; Giannis and Zion.

In the first game between these two clubs on January 29th in New Orleans, the new-look Pelicans (with former Bucks guard Eric Bledsoe) edged out the new-look Bucks team (with former Pelicans guard Jrue Holiday) 131-126. Giannis poured in 38 and grabbed 11 boards while Holiday went for 22 and 9 rebounds in his return to Crescent City, but it was the Pelicans getting 20+ from Zion, Ingram, Ball and Bledsoe that was too much for Milwaukee to overcome. The Pelicans were simply the better team that night.

In tonight’s game, the Bucks will be looking to continue their winning streak (now at 3) while the Pels are looking for their second win in as many nights after beating Detroit at home last evening 128-118. The Bucks enter tonight’s contest as a nine point favorite (-9), with a total number for the game landing at 242 ½ after opening at 240 this morning.

The Bucks are 12-4 on their home court. Milwaukee is second in the Eastern Conference scoring 119.8 points while shooting 48.8% from the field, and might be regaining that season-ago form, having won its past three games by an average margin of 17.7 points, including a 139-112 rout of the visiting Minnesota Timberwolves on Tuesday.

The Pelicans are 5-10 in road games. New Orleans is fourth in the Western Conference scoring 115.2 points per game and is shooting 48.3%, and over their past two games, the Pels have staged significant comebacks.

They set a franchise record by overcoming a 24-point deficit to beat the Boston Celtics in overtime on Sunday, then escaped a nine-point, third-quarter hole to beat the Detroit Pistons 128-118 on Wednesday.

With these factors in mind, and digging in to some recent betting trends ATS you’ll see that the numbers favor the Bucks to cover tonight thanks to our friends at Covers.com:

However, I’d offer some caution in betting too much on Milwaukee to cover the spread tonight. We’ve all seen (at least those of us who’ve watched this team) how inconsistent this Bucks team can be on defense. That inconsistency in combination with a nationally televised game, a later than normal start time (8:30p), and this recent trend from Covers.com for the Pelicans give me some pause in consideration of taking MIL (-9).

I really do like that Milwaukee has won their last three outings, and have done so in very convincing fashion. However, I’m not yet sold that this team, without Holiday (who’s still anticipated to be out dealing with COVID) will be able to cover a very solid nine point spread.