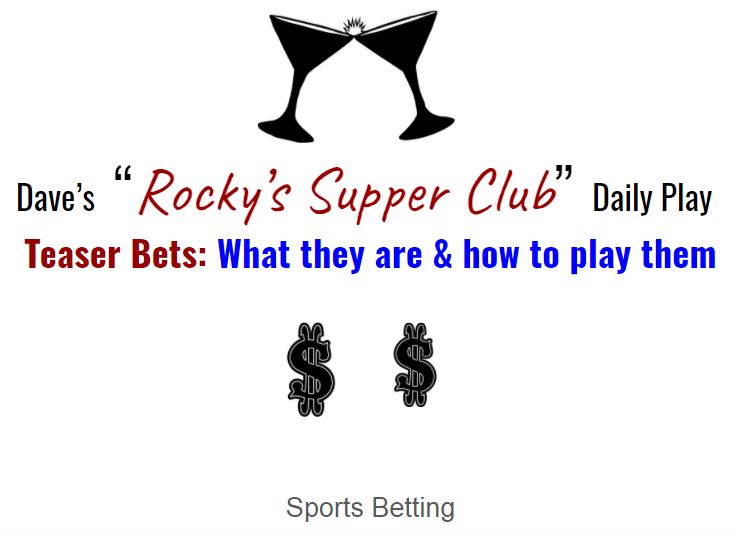 What’s on the table today?: What is a “Teaser” bet?

In the hopes of making the seemingly complicated world of sports betting a little easier, today I want to talk about “Teasers”; what they are, how to play them, and what you need to consider before making a “Teaser” bet.

We’ll start right at the beginning: what is a “Teaser” bet?

A teaser is a sports bet that is very much like placing a parlay bet. Both of these types of plays are made by selecting two or more events to occur (ATS, Totals). Like a regular/traditional parlay, each event selected for a teaser must win in order for the player to win to win the bet.

The biggest difference in separating a teaser from a traditional parlay is that you can alter point spreads and over/under totals between 4 and 10 points depending on the sport and teaser (the NFL is typically a 6 point + or -). Changing the point spread and point total makes the wagers appear to be easier to win. But don’t let appearances fool you, winning multiple bets no matter the point spread or total is never easy.

However, the adjusted lines should help bettors find a little more confidence in their bets. The payout from the book for a teaser is lower than a parlay since these are anecdotally easier to win (but are still nowhere near a guarantee).

Now, let’s take a look at a mock example of what a “Teaser” bet might look like in NFL football where the most common way to utilize the Teaser is by flexing the points (for NFL football generally 6 points) with the purpose being to secure what you think will be a more favorable betting outcome.

A two-team six-point teaser on the underdogs would change the point spreads to the following:

A two-team six-point teaser on the favorites would change the point spreads to the following:

As you can see, using the 6 points to move a line up or down, depending on how you’re viewing the game, can be seen a massive advantage.

So, if the advantage of betting a “Teaser” is patently obvious, what would I need to “consider” before making a Teaser bet? Why wouldn’t I make Teaser bets every time when you see how much better (at least that’s what you think) the odds are for me to cash my ticket?

Two things make this play come with some caution. First, like any parlay bet, it’s hard to win more than one outcome at a time no matter how juicy the numbers look. Second, the payout on a Teaser, considering that you’ve altered the numbers so much in your favor, are much lower than a traditional parlay bet or a straight wager on the game itself.

A $10 parlay with the original point spreads (shown above) would pay approximately $27.70. A $10 six-point teaser would pay $8.35. The same teaser will pay less if the point spreads or totals are teased by 6.5 or 7 points.

There are instances where using the Teaser is a great idea, especially if you think the oddsmakers are a little off on a game, or if you have a number of games you want to parlay on, but you’re just not comfortable taking the spreads (or totals) as they stand.

For more information and strategy on Teaser plays, I’d like to recommend my friend Rob Miech’s book “Sports Betting for Winners: Tips and Tales from the New World of Sports Betting” which can be purchased on Amazon and is a fantastic resource, or by going to The Lines.com which has some great info and was the source of some of the definitions and examples in this post.