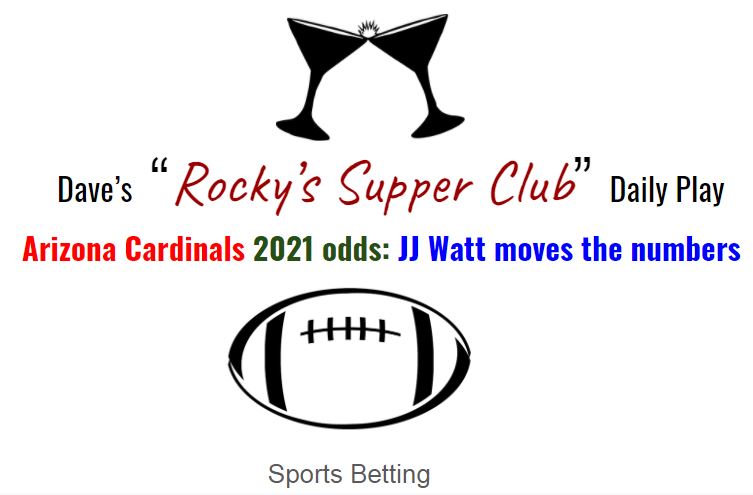 The shocking news on Monday that JJ Watt was taking his talents to Phoenix to play for the Cardinals surely had some Wisconsin/Packers fans left a little confused. Didn’t JJ have a specific list of FOUR things he was looking for in his next destination?

Yes, as a matter of fact he did, and they were: Top Tier QB; Strong supporting cast; Cap Space; Team culture. The Cardinals were a nice story in 2020 going 8-8, but is Kyler Murray a Top Tier QB? Do the Cards have the team culture thanks to Kliff Kingsbury? Is the supporting cast good enough to help Watt continue his reign of terror on offenses around the league?

Those questions were surely not answered in any affirmative way on Monday except for this, the Cardinals had the money and they were willing to give it to JJ. Should any of us have been that surprised that a man, just 31 years old, with potentially lots of good football left, sign somewhere other than where he could get the most money? No was the answer, and now the Cards have another Superstar player to add to their emerging roster simply because they were willing to pay him.

Arizona also had something going for them in the familiarity department with Defensive Coordinator Vance Joseph who spent three seasons with Watt at the beginning of his career in Houston as the defensive backs coach, and former Texan’s wide receiver DeAndre Hopkins who was traded to Arizona last off-season. These kinds of relationships can often prove critical when landing a player of Watt’s caliber, and that was evident when messages emerged between Watt and Chandler Jones, as well as Watt and Hopkins.

Perhaps we (and the oddsmakers) missed those connections when assigning value to who “had the best chance” at signing Watt leading to some real, and rampant speculation, that Watt was headed to Cleveland, Green Bay, or Buffalo. Turns out, Watt never really had those teams on the radar, other than a passing interest in what those teams could potentially mean to him in terms of Super Bowl aspirations. Perhaps it was the Cardinals learning from past mistakes (in movies like Jerry McGuire) and decided to simply “Show Him the Money”..

Now that Watt is officially a Cardinal, let’s take a look at how the oddsmakers (who totally whiffed on his landing spot) are calibrating the Cardinals chances to win their division, the NFC and the Super Bowl.

What this shows you is this: the Cardinals weren’t considered real contenders for the NFC or the Super Bowl before Watt’s addition, and that hasn’t changed a ton since.

It’s wonderful to think of a player like Watt making a HUGE impact on the betting odds, however, for any non-elite quarterback, it’s really a tough ask to make huge changes to those odds. If the Cardinals are lucky JJ stays healthy, plays about 80% of the snaps, and helps the Cards make the postseason for the first time in years.

The reality of the situation is so much more uncertain than that, as you can see by oddsmakers reluctance to move the Cardinals needle too much in the wake of the signing.

However, as we just gone over in this article…the oddsmakers were WAY wrong when trying to peg where Watt would land. Could they also be wrong with NOT putting more stock into Arizona’s chances to at least win their division? Too early to tell, but JJ has sure made easy work for sports talk show hosts, and gamblers alike.