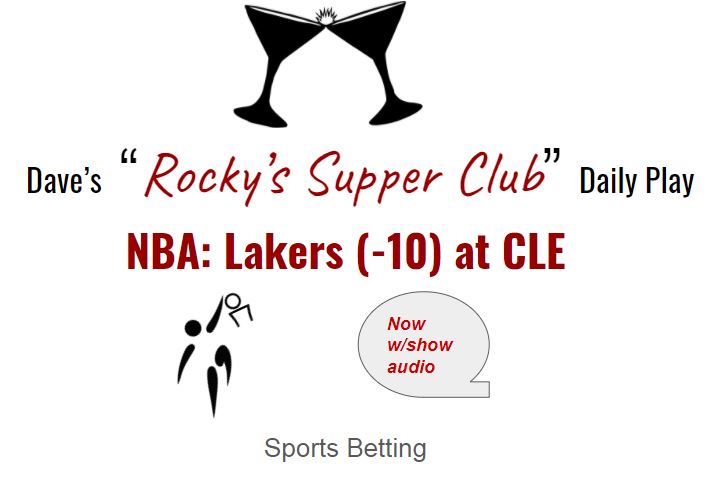 How did I get here?: I want to put some blame here on the Packers coaching staff, and the Bills, and myself, for getting so wrapped up in pre-game analysis that I overlooked the most essential rules in sports betting (for me):

If anything this weekend was chalked up to over-hyped expectations and underwhelming decision making. How the Packers didn’t go for it on 4th down with just over two minutes and Tom Brady on the other side of the ball? How did I miss that the Bills exceptional season was over after the lackluster win over Baltimore?

What’s on the table today?: Another…gasp…play ATS on an NBA game!!!! To this point I’m yet to win an NBA game ATS but without much else fitting into my brain over the past week besides Packer football I really haven’t invested any time into college hoops or NHL hockey, so the NBA it is.

Tonight I’m making a play on the Lakers (-10) vs the Cleveland Cavaliers in Cleveland.

The Lakers, as Bucks fans might well remember, are unbeaten this season on the road. Los Angeles is also coming off a nice, if modest 101-90 win against the Bulls in Chicago Saturday, while the Cavs are going to limp into tonight’s fresh off the heels of a horrendous 141-103 loss to the Celtics Sunday night. The Cavs are also allergic to covering ATS on Monday as you’ll see outlined below.

Los Angeles is clearly the better team, with better players, and statistically all of the indicators the Lakers should cover the (-10) spread tonight.

The top trends from Covers.com:

On the season the Lakers are the 2nd best team in terms of scoring defense, giving up an average of 104.3 points per night. However, on the road, the Lakers are an even better and more staunch defensive unit allowing just 99.2 per contest with a record of 9-0 and have made it look easy on most occasions.

The Cavs aren’t a terrible team this season, recently beating the new look Nets twice and tallying an 5-3 home record to start, but that won’t be enough tonight against a Lakers team that is locking clubs up, and wearing them out with an even better rotation of players including reigning Sixth Man of the Year Montrezl Harrell, Dennis Schroder, and Wesley Matthews.

Tonight’s game could turn out to be a fairly low scoring affair with Cleveland on the second night of a back to back, but I expect the Lakers to cover the (-10) spread and hit the road for a Wednesday national TV game in Philadelphia versus the Sixers feeling pretty good about themselves, and possibly with starters rested.