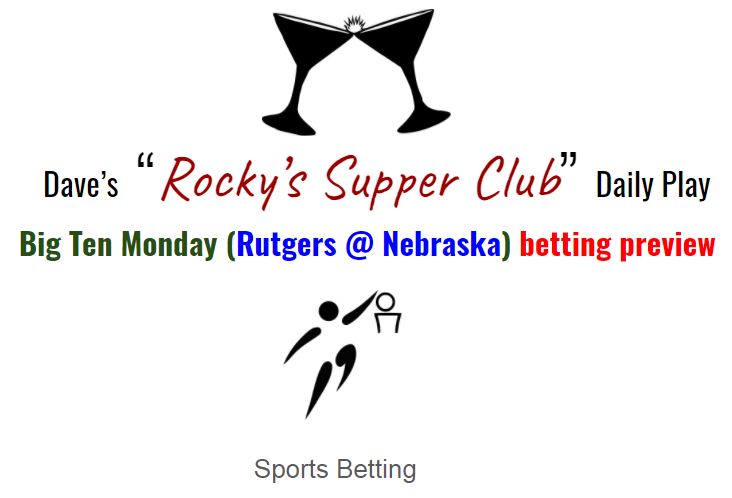 What was already lined up to be a tough matchup for Nebraska has now turned into what could be the thrashing of the year with the Cornhuskers leading scorer, Teddy Allen, abruptly leaving the program on Monday (today) before Nebraska was set to face a tough Rutgers team.

Early off-shore lines opened up with Rutgers (-7), while Vegas opened up at a unanimous (-8). I would have expected that in the time between the announcement of the Allen departure and the writing of this column (approx 1 ½ hours) there would have been some significant line movement, or even a drop by the books altogether. That hasn’t happened however so we’ll go ahead and treat this game as if nothing changed, and the line of Rutgers (-8) will be unaffected.

Perhaps if they played in another conference, Nebraska may have had a much better season in 2021. But, as it sits with just three games left, they have managed just six wins in 23 games and have won just two Big Ten contests.

The Huskers now prepare for a Rutgers team who plays tough defense and looks to turn them over plenty. It is senior night in Lincoln, so maybe they will come out on a mission, but their season appears to be all but over with three games left, and they will require some heroic offensive performances to be able to compete with a clearly superior team on both ends of the floor in Rutgers on Monday night. These performances will now need to come from everybody else with Teddy Allen suddenly gone from the team and the Cornhuskers reeling after already having suspended Allen for violating team rules on February 8th. .

On the other side of the matchup tonight, Rutgers has ridden their terrific team defense that only surrenders 67.8 points per night into what has been a fairly successful 2021 campaign, and they could be a sleeper team headed into tournament play due to the fact that they’re in the best conference in college basketball this season.

The Scarlet Knights are led by guard Jacob Young (who has 37 steals on the year) and 6-11 rim defender Myles Johnson who has 56 blocks in 22 games, the Scarlet Knights have the defense to give just about anyone problems the rest of the way and present a nightmare matchup for Nebraska, who struggles on offense. Ron Harper Jr. is also a stout defender averaging 6 rebounds a contest and leads Rutgers in points per game at 15.7.

There’s also something else at play here for Rutgers in looking to cover the spread (-8). For some reason, the Scarlet Knights are damn near unbeatable ATS on Monday night games going 19-3 ATS (according to Covers.com) while also showing up well ATS following an ATS win..

Nebraska, nor surprisingly is on the other end of the equation here, taking a real hit after a rare (at least over the past two seasons) straight up win, or versus a team with a winning record.

Finally, in preparing any sort of analysis for this game I want to throw out there that I was confident in Rutgers (-8) before the news of Tony Allen’s departure.  Now that Allen, who’s scored more than 20 points on eight occasions this season, I’m REALLY liking this game for Rutgers.

Yes, it’s senior night, but how pumped do you think these kids are really going to be with their lead-dog up and quitting on them day-of-game? How much do you think Rutgers wants to win BIG so they can add something to their resume before tournament time? This thing looks like Rutgers (-15) all over it, so if you’re thinking of making a play, make it now before some sharp bookmaker reads this and takes my advice!