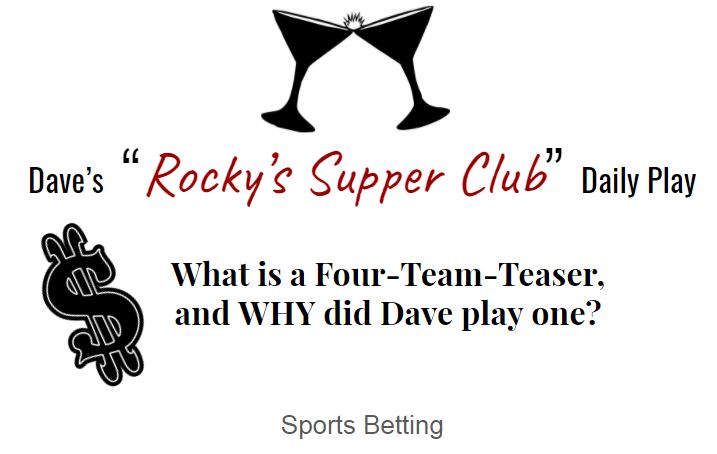 How did I get here?: Wisconsin showed up to play in the Mayo Bowl, and wow did the Wake Forest Demon Deacons collapse. Wake Forest was my bet yesterday at (+10), meaning they were a 10 point UNDERDOG.

What started out to be a Wake Forest run-away, up 14-0 in the 1st quarter, quickly turned into a tight game with the Badgers storming back, and ended up as Wisconsin route thanks to THREE fourth quarter interceptions by Wake’s QB Sam Hartman. Hartman had thrown ONE interception on the season prior to yesterday’s game.

Hartman’s INT’s led to Wisconsin points, and the Badgers got another Bowl win 42-28, a fourteen point win, and good enough to add another loss to my record.

What’s on the table today?: Four-Team-Teaser time!!! This morning I decided to throw a wild-card out there and took a run on a Four-Team-Teaser that will feature the Alabama/Notre Dame game, the Clemson/OSU match up, and two NFL games; GB @ CHI and PIT @ CLE in Week 17.

Before we jump into HOW this play will look, and WHY I decided to take it, let’s get familiar with WHAT a Four-Team-Teaser is thanks to a great explanation from my friends at DocSports.com

“Like a parlay, a teaser is a wager that involves multiple games — two or more — and you must be correct in all of the games in order to cash your ticket and win the bet. Teaser bets are most common in football and basketball — the against the spread sports .

Now that we know WHAT a Four-Team-Teaser is lets look at WHAT I’m playing this weekend, starting with the College Football Playoff games.

Alabama opened up against Notre Dame as a seven point favorite (-7), but was quickly bet all the up to a twenty point favorite (-20) at books across Vegas. This means a BOAT LOAD of money is coming in on Alabama to simply crush the Fighting Irish.

This is where I started with the Teaser because while I do think Alabama is a better team, I don’t know HOW much better. The beauty of the Teaser is this, we take Notre Dame, as the 20 point dog (+20) and get to bet that all the way down to a 26 point dog (+26), giving me tons of extra breathing room if Alabama does indeed blow out Notre Dame by very common scores of 21 and 24.

Next up; Clemson vs OSU. Clemson is CLEARLY the better team here, but again, by how much it’s hard to tell. The odds makers have been holding pretty steady on this line with Clemson coming in at a 7 ½ point favorite (-7.5), which I think they will cover. However, because I do think Clemson will win, I can take the 6 points and apply it to them, as a favorite, and knock those odds down to a very tasty Clemson (-1). This essentially puts Clemson/ND as a Pick-em, and I can’t pass a chance like that up!

Moving to the NFL’s portion of the slate, I’m all over the Steelers at Browns (+9.5). I realize that Pittsburgh won’t be playing Big Ben, and who knows who else for “rest”. BUT, the Browns are again closing their team facilities due to COVID (Thursday was the 2nd time this week), and a major question mark of who the heck will even be available for them should cause concern for Brown’s hopefuls.

Taking the Browns situation along with the magnitude of what they’re attempting to do I am going with the Steelers and upping their line as a dog to (+15.5). The Browns would have to blow Pittsburgh out of the building to cover that number, and honestly I just can’t see them doing that. If they do, it’ll be the happiest surprise in Cleveland since Lebron came back to the Cavs.

Finally, and possibly because I’m a fan, I’m taking a run at the Packers in Chicago versus the Bears. Chicago has been rolling of late, winning their last three after a horrid six game losing streak that saw head coach Matt Naggy relieve himself of the play-calling duties. These were wins against non-playoff teams in Houston, Minnesota and Jacksonville, but they were still wins and the Bears are alive in the NFC Playoff picture at 8-7.

The Packers are winners of their last five, and with Aaron Rodgers poised to win his third career MVP I like the Packers to make a statement in this game. Green Bay is holding firm as a five and a half point favorite on the road (-5.5), but thanks again to the beauty of the Teaser, I’m taking Green Bay and moving them down to a one-point underdog (+1). This kind of maneuver gives me a lot of breathing room if the game is close, and Green Bay holds on to win, by any amount whatsoever.

Here’s how my Four-Team-Teaser card looks: