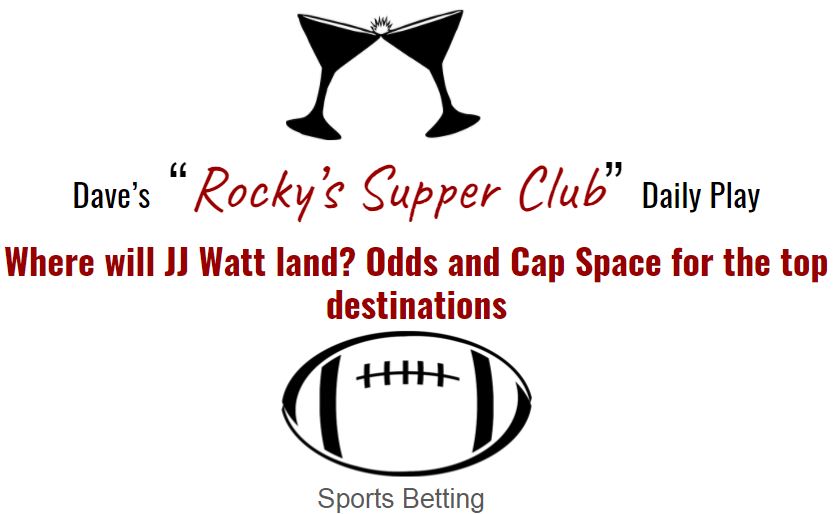 Could JJ be headed home to Wisco??

Could JJ be headed home to Wisco??

What’s on the table today?: Over the weekend, the Houston Texans and JJ Watt mutually agreed to part ways after 10 seasons.

According to ESPN NFL insider Ed Werder, Watt is garnering interest from about 12 NFL teams, with a couple of teams jumping out as serious favorites to oddsmakers.

Today we’ll take a look at the Top 12 teams as far as odds, as well as what those teams have in cap space. In leaving Houston, Watt has identified four priorities in signing with his new team: cap space, supporting cast, team culture & scheme.

Packers fans would of course love to see JJ Watt make a return to his home state of Wisconsin, and perhaps Watt has been considering that as well. However, the uphill battle for Green Bay will be the cap space. How are the Packers, who are $20M over in cap space as it is, going to be able to find enough dollars to land Watt? Realizing that Watt is on the decline is one thing, but according to ESPN Stats and Information, Watt ranked 15th out of 119 eligible pass rushers in win rate last season. This dude can still play and he’s going to command some decent coin.

The Steelers seem (and are) a logical choice, except for that cap issue again. While the Steelers aren’t in quite as bad of shape as the Packers, they are close coming in at nearly $16M over. If Big Ben retires however, or Pittsburgh can seriously restructure him down to a near minimum contract, that might be enough to move them into plus territory.

Another team that’s getting some love from the oddsmakers are the Cleveland Browns, and for VERY good reason. Cleveland has a whopping $23+M in free cap space in 2021, a team that made the postseason for the first time since Moses wore short pants, a young and energetic head coach, an offense that runs the ball to give the defense serious rest, AND, a defense that already features one of the great pass rushers in the game with Myles Garrett. The Browns also feature Sheldon Richardson at the defensive tackle position meaning that Watt, for what will surely be his final ride, has some serious good dudes to play alongside and won’t have to face the constant double teams he did in Houston.

Those teams I mentioned above were all subject of this morning’s Poll Question on the WKTY Morning Show. The Steelers and Packers while sentimental favorites don’t have what Cleveland has in cap space. They both have the team culture and supporting cast (Steelers more than Packers), and they’d both be able to work Watt into their team scheme. The Browns certainly don’t have the long-term culture built in like the Steelers or Packers, but in his first season as head coach Kevin Stefanski really turned some heads, and seemed to turn the Browns around almost 180 degrees from previous head coach, and former manager of Big 5 Sporting Goods in Grand Rapids, Freddy Kitchen. That, along with tons of money, room enough to even sign other big name guys, the supporting cast, and the scheme, seem to make the Browns a really attractive fit.

It’ll be interesting to see where Watt lands, but for now we can only speculate, so speculate we will! Below you will find the odds on where JJ will go next, along with each team’s salary cap space, a big deal according to JJ.

Have a great start to your week, and just to see if this adds any luck to the equation, GO PACK GO!

(Odds thanks to Covers.com; salary cap info thanks to Sportrac.com)