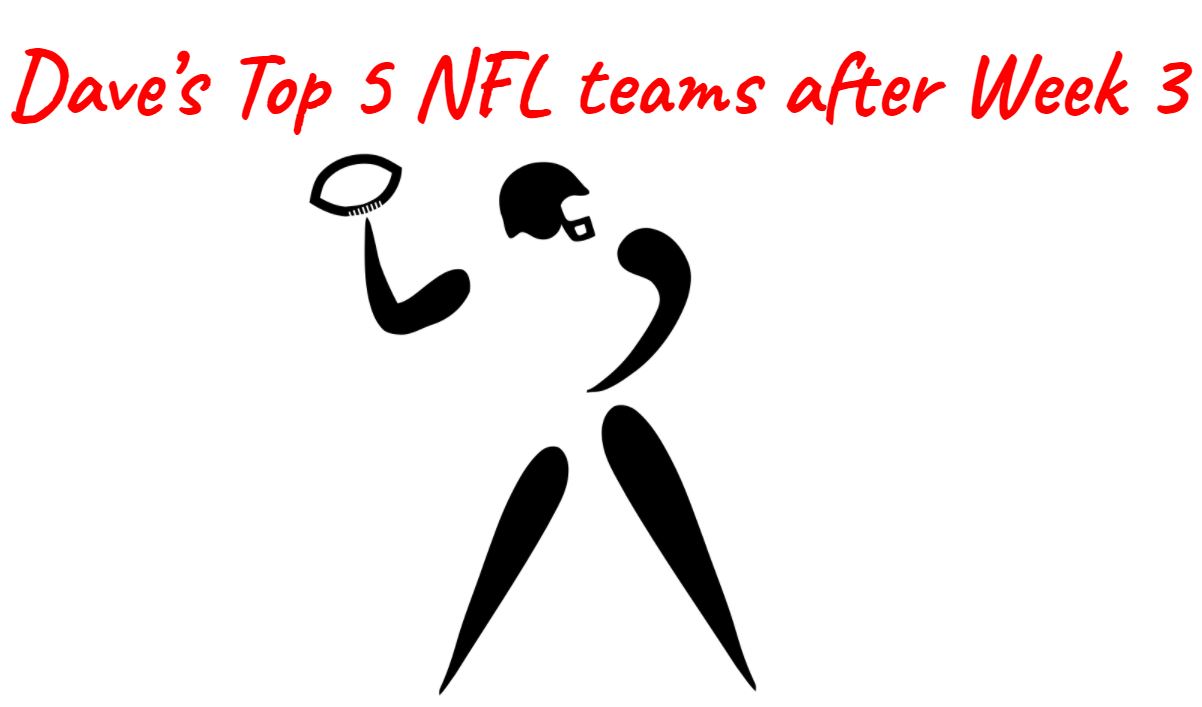 1. Kansas City Chiefs (up from 4)
It’s hard to know where to start with the Chiefs. Last week after a “disappointing” road victory over the Los Angeles Chargers, the Chiefs had slipped to Number 4 in my rankings. The Super Bowl champs looked OK through the first two weeks of the season, but on Monday Night Football Patrick Mahomes and company went off in a 34-20 beat-down of my previous Number 1, the Baltimore Ravens. Mahomes was sterling, throwing for 385 yards and 4 scores, rushing for another. Lamar Jackson looked below average, throwing for just 97 yards on 15/28, and calling the Chiefs his “kryptonite”. The win for the Chiefs was expected in my pre-season win projections, but the way the Chiefs handled the Ravens was a wake up call for everybody, this team is legit and wants to repeat.

2. Green Bay Packers (up from 3)
Ok, whatever that secret tape from 2010/2011 that Aaron Rodgers found needs to be bottled up and stored forever so no other QB can get it. Rodgers is playing like a man possessed after three weeks and the Packers are rolling right along with him. Beating the Vikings and Lions in successive weeks left some skeptics wondering how good the Packers were against two teams who had yet to win. That skepticism was washed over on Sunday Night Football when the Green & Gold got the best of the Saints on the road in New Orleans. Regardless of fans/no fans, playing on the road versus the Saints, with a motivated Drew Brees (who did have a decent game) is never easy…just don’t tell that to Rodgers who was surgical once again throwing for 283 yards and three TD’s, rarely seeing or feeling any pressure and putting balls in spots he hasn’t, in, well, a decade. If the Packers defense can shore up it’s tackling issues, which were atrocious against New Orleans, Green Bay is going to be fighting for the Number 1 spot in my rankings all year.

3. Seattle Seahawks (down from 2)
Russell Wilson is officially the best player in the NFL regardless of position. What Wilson brings, leadership, toughness, determination, decision making, clutch ability, are all tops. This dude is just playing the quarterback position at another level which is SCARY to think about with guys like Mahomes and Rodgers also going nuts. The NFL is in a “golden-age” of sorts when it comes to QB play. Sunday in the Seahawks 38-31 win over the Cowboys it was Wilson’s 5 TD’s, including the game-winning TD to DK Metcalf who willed his team to victory, overcoming horrible play by his defense, and injury to his number one back on the final drive of the game. Patrick Mahomes gets the nod when it comes to creative trick throws, but nobody throws a better deep ball than Wilson and with his NFL record setting 14 TD’s through 3 weeks (only 1 int) and a motor that won’t quit, the Seahawks are looking to take advantage of a division that features a suddenly injury weakened 49ers, and a Cardinals team that just lost the Lions.

4. Baltimore Ravens (down from 1)
The Ravens drop from my Number 1 to Number 4 spot after the loss to the Chiefs on MNF. The loss was expected by me since before the start of the season, and thats what the Ravens stay in my Top 5. The post-game comments by Lamar Jackson however that the Chiefs were the Ravens “kryptonite” did worry me. Has Kansas City already gotten into the head of the 2019 MVP? If so, what does that say about the Ravens chances against the Chiefs in the post-season? Those will be down the road however as I do anticipate Baltimore to rebound nicely from this loss and actually finish out the season without another loss. That is a very lofty prediction indeed but I’m sticking with my pre-season path until it collapses with another loss. Baltimore has all the tools, all the weapons, and if they play like they’ve shown they’re capable of they should remain firmly in my Top 5.

5. Buffalo Bills (1st time in rankings)
The Bills are legit. Buffalo did escape Sunday with a win over the Rams I described as “poetic justice”. Josh Allen has turned into a true franchise level quarterback throwing for 4 TD’s Sunday, rushing for another, and leading the Bills on a fourth quarter drive to save their victory. Josh Allen now has 10 game winning drives since 2018 tying him with Deshaun Watson for most in the NFL over that span. The Bills defense was stifling until it nearly collapsed but with Allen they’re never out of a game. The Bills path to the playoffs and to staying in my Top 5 won’t be easy though. Over the next five weeks the Bills will face opponents that include the Titans (3-0) the Chiefs (3-0) the Seahawks (3-0) and the Patriots (2-1), with a saving “off-week” versus the Jets. This will be a tough stretch for Buffalo but if they come out 3-2 or 4-1 over those 5 we’ll truly see what this team is made of.