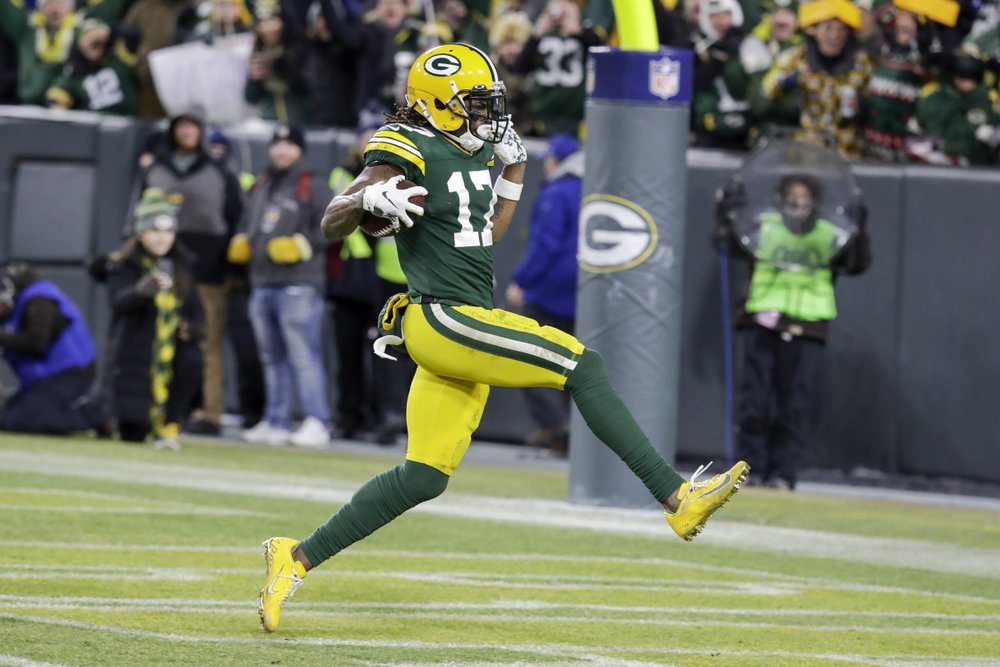 GREEN BAY, Wis. (AP) — Aaron Rodgers connected with Davante Adams eight times for 160 yards and two touchdowns, Green Bay’s spruced-up defense fended off a spirited Seattle rally, and the Packers held on for a 28-23 victory Sunday night to reach the NFC championship game for the third time in six years.

Aaron Jones rushed for 62 yards and two first-half scores for the Packers (14-3), who will travel next weekend to take on top-seeded San Francisco.

“This is where it really gets fun. There’s only four teams left, and we’re one of them, and we’ve got a legitimate chance,” said Rodgers, who went 16 for 27 for 243 yards in his 17th career postseason start. He has 38 touchdown passes in the playoffs, good for fifth in league history.

Rodgers connected on two third-and-long passes on the final drive, allowing the Packers to kneel down and run out the clock.

The first was a 32-yard strike to Adams on third-and-8 with 2:19 left. After that, Rodgers hit Jimmy Graham on third-and-9 right after the two-minute warning to take down a Seahawks team that was 8-1 on the road this season entering the game.

“I’m just going to enjoy a nice glass of scotch tonight,” Rodgers said, “and get on to the film of San Fran and get ready for a tough opponent.”

Russell Wilson carried the Seahawks (12-6) on yet another comeback, this time from a 21-3 halftime deficit, but the Packers forced a punt just before the two-minute warning on the second sack of the game by Preston Smith, Green Bay’s fifth of the game. Za’Darius Smith, the other big-money free agent added to the defense last spring, had two sacks himself.

The Seahawks never got the ball again.

“I couldn’t be happier for our guys. They’ve put in a lot of hard work,” coach Matt LaFleur said. “They’re a group that sticks together, and they don’t blink.”

Rodgers exacted some payback for five years ago, when the Packers blew a 16-0 halftime lead in the NFC championship game at Seattle and lost 28-22 in overtime.

The Seahawks haven’t been back to the conference title game since, let alone the Super Bowl. Rodgers is running out of time faster than Wilson, though, nine years after his only championship.

Though many of Green Bay’s performances haven’t been pretty, with so many hold-on-at-the-end wins, Rodgers and LaFleur have sure meshed well in the coach’s rookie season.

“Let’s be honest. I don’t know that even our fans felt supremely confident in us,” Rodgers said.

The Seahawks had just a plus-seven scoring margin during the regular season, making quite the habit of second-half rallies. Wilson did some of the finest work of his eight-year career in 2019, helping the Seahawks stay on track despite a steady stream of injuries, including the late setbacks in the backfield that prompted the emergency call for Marshawn Lynch.

Racking up 64 yards rushing on seven scrambles and completing 21 of 31 passes for 277 yards, Wilson directed touchdown drives of 69, 84, 79 right out of the gate after halftime. Lynch finished two of them with scores, and Wilson threw to Tyler Lockett for the other one.

“Every time I looked up, he was making somebody miss in the pocket, creating and extending plays,” LaFleur said. “That’s what he’s done his whole career.”

Lynch’s second touchdown with 9:33 left cut the lead to 28-23, but Jaire Alexander blew up the 2-point conversion attempt with a sack on an unblocked blitz. The Packers gave the ball back to the Seahawks with a second consecutive punts, this time with 4:54 left at the Seattle 22, but Wilson ran out of tricks in his seemingly bottomless bag of them.

Lynch, who has 12 rushing touchdowns in 13 career postseason games to tie for fourth in NFL history, had only 26 yards on 12 carries.

The Seahawks brought their pass rush to life with seven sacks while grinding out a 17-9 win at Philadelphia last week in the wild card round, with Jadeveon Clowney making his presence felt including a hit that knocked Eagles quarterback Carson Wentz out of the game with a concussion. The Packers mostly kept Rodgers much better protected, though, and a Seahawks defense that forced 32 turnovers in the first 14 games played a fourth straight time without a takeaway.

The Packers had three touchdown drives of 75 yards apiece over the first three quarters, plus a 60-yard march preceded by a missed 50-yard field goal try from Jason Myers.

Rodgers hasn’t had much help beyond Adams and Jones this season, but he and LaFleur did a masterful job of getting them the ball with some Graham mixed in. On the opening possession, Adams and Geronimo Allison ran angled routes toward each other before faking the pick and zagging away. Seahawks cornerback Tre Flowers was caught in the confusion, allowing Adams to break free for the 20-yard score.

Seahawks fans have plenty of bad memories of their favorite team’s performances in Green Bay, with the losing streak at Lambeau Field now at nine straight games. The last such win for Seattle was on Nov. 1, 1999.

There was the hot mike that picked up Matt Hasselbeck’s ill-fated boast during the overtime coin toss that the Seahawks would win, preceding his pick-six in the 2003 playoffs. There was the blowout in the snow in the 2007 playoffs, which turned out to be Brett Favre’s final win for the Packers. There were also the regular season losses with Wilson in 2015, 2016 and 2017.

Seahawks: LG Mike Iupati was out with a neck injury, and Jamarco Jones left in the second quarter with a concussion. That forced rookie Phil Haynes into action. … Clowney, who has fought through a core muscle injury this season, was holding his midsection in the second quarter and briefly absent for the first TD run by Jones. … Backup DEs Ziggy Ansah (neck) and L.J. Collier were inactive, and DE Quinton Jefferson left with a foot injury in the third quarter.

Packers: RT Bryan Bulaga, one of six players the team reported this week as being limited by illness, was active for but did not play. Jared Veldheer replaced him. … FB Danny Vitale (ankle/illness) was inactive. … WR Allen Lazard hurt his ankle in the second quarter after Jones collided with the back of his right leg.

Seahawks: head into the offseason, needing replenish their depth on the offensive line and on defense while Wilson remains in his prime.

Packers: advance to their third NFC championship game in six years. They lost 37-8 on Nov. 24 to the 49ers, who beat Minnesota 27-10 on Saturday in their divisional round game. All four of Green Bay’s appearances in the NFC title game with Rodgers at the helm have been on the road. They won at Chicago after the 2010 season to reach his only Super Bowl.

TOP PHOTO: Green Bay Packers’ Davante Adams runs to the endzone for his touchdown catch during the second half of an NFL divisional playoff football game against the Seattle Seahawks Sunday, Jan. 12, 2020, in Green Bay, Wis. (AP Photo/Darron Cummings)