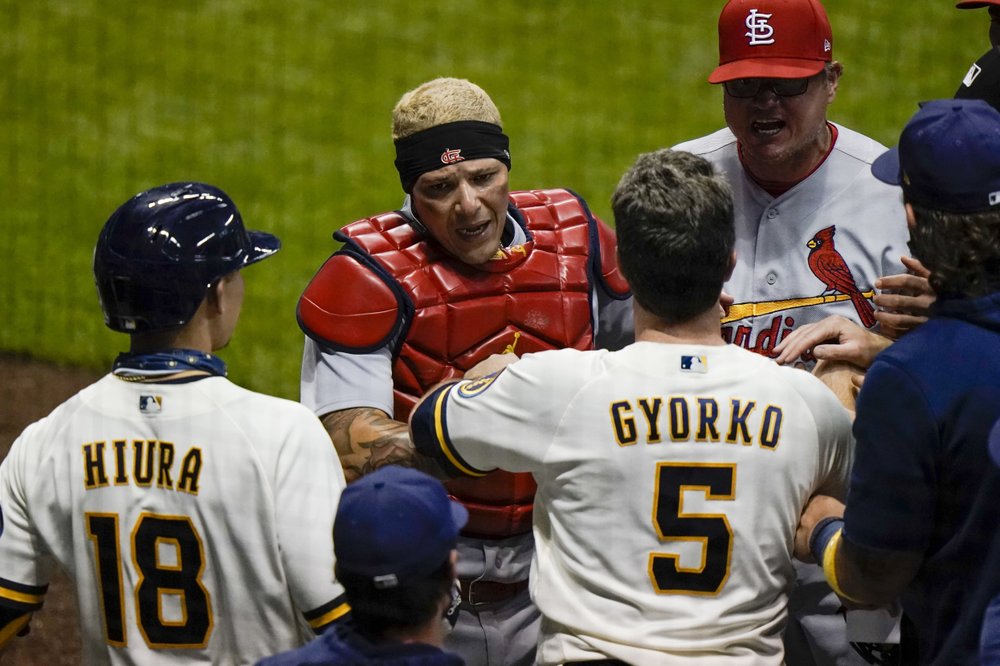 MILWAUKEE (AP) — Christian Yelich broke out of his slump with a home run and three hits, Ryan Braun also went deep and the Milwaukee Brewers romped to an 18-3 win over the St. Louis Cardinals on Tuesday night.

Keston Hiura and Daniel Vogelbach also homered for the Brewers.

Well after the game was out of hand, both managers were ejected following a catcher’s interference call on Yadier Molina that led to a tense confrontation in front of the Brewers’ dugout.

Milwaukee jumped on St. Louis early, a night after the teams combined for only eight runs in splitting a doubleheader in which both games went to extra innings.

With St. Louis leading 1-0 in the first, Yelich and Braun hit back-to-back solo home runs off Jack Flaherty (3-2). Neither was hit particularly hard. And Flaherty, who had allowed two runs or fewer in five of his six previous starts, showed some dominance, as six of the first seven outs he recorded were strikeouts.

But Yelich, who singled, and Braun, who walked, hurt Flaherty again in the third inning. They scored on a double by Vogelbach, a designated hitter claimed off waivers Sept. 3.

The game broke loose in the fourth, after Flaherty gave up two singles and a walk to load the bases. There were still no outs when three runs crossed the plate, giving Milwaukee a 7-1 lead, and Flaherty was pulled.

Jake Woodford came on and gave up a three-run homer to Hiura that put Milwaukee up 11-1. The solo shot by Vogelbach came in the seventh, off Nabil Crismatt.

Cardinals pitchers entered Tuesday having given up the fewest home runs in the National League.

Milwaukee left-hander Brett Anderson (3-3), scratched from his last scheduled start on Sept. 12 because of a tight right hip, pitched five innings. He gave up an RBI double and a bases-loaded walk, both to Paul Goldschmidt.

Milwaukee manager Craig Counsell acknowledged before the game that he considered resting Yelich, who went 3 for 4 with two singles. Before the homer, the 2018 NL MVP had seen his average dip below .200, as he went 1 for 18 with 12 strikeouts over his last five games.

“Obviously it’s been a struggle up there, to say the least,” Yelich said. “It’s baseball. You’re going to go through it. It’s going to happen. Sometimes there’s no explaining it. It’s how the game works.”

Counsell and Cardinals manager Mike Shildt were ejected in the fifth, with Milwaukee leading 13-2, after Braun was awarded first base on the interference call. Shildt examined Molina’s left arm, then he and Molina approached the Milwaukee dugout and exchanged words with Brewers players. Players from both teams’ dugouts and bullpens massed in front of the Milwaukee dugout, but that was the extent of it.

Shildt said he didn’t blame Braun, but was upset because it was only the second time in Molina’s career that Molina has been called for interference. “I go to check on him and make sure he’s OK and hear something out of the (Brewers) dugout,” Shildt said. “We don’t start things, but we’re not going to take it. Heard something I didn’t appreciate. I will always have our players’ backs.”

Said Counsell: “Apparently there was a little miscommunication between (Shildt) and our dugout, him and me, I should say, him and me.”

With no off days during the first three rounds of the playoffs, under the schedule announced Tuesday, Counsell said that “I understand that’s how we have to do it, but that is a significant change in the rules for the postseason, a very significant change in the rules for postseason. It affects how your roster’s made up, without a doubt, and it will affect, definitely, pitching strategy — not so much the first round, but after the first round.”

Shildt said of the quarantining required by the playoff schedule: “I’m a take it as it comes kind of person. It is what it is. Everyone’s having to do it. I think if you keep the mental edge and know that that’s the situation, you make the best of it.”

Cardinals: RHP Johan Oviedo was expected to rejoin the team Tuesday evening and is expected to start the second game of Wednesday’s doubleheader, Shildt said. Oviedo was put on the injured list Sept. 10 after he came into contact with someone who tested positive for COVID-19. … 2B Kolten Wong was scratched from the lineup with discomfort on his left side. He was replaced by Tommy Edman.

A full slate of pitchers for Wednesday had not been announced. St. Louis RHP Adam Wainwright (4-1, 2.91 ERA) will start the first game of the doubleheader. The 39-year-old has pitched six or more innings, including a complete game, in each of his last five starts. RHP Brandon Woodruff (2-3, 3.40) will start one of the games for Milwaukee.