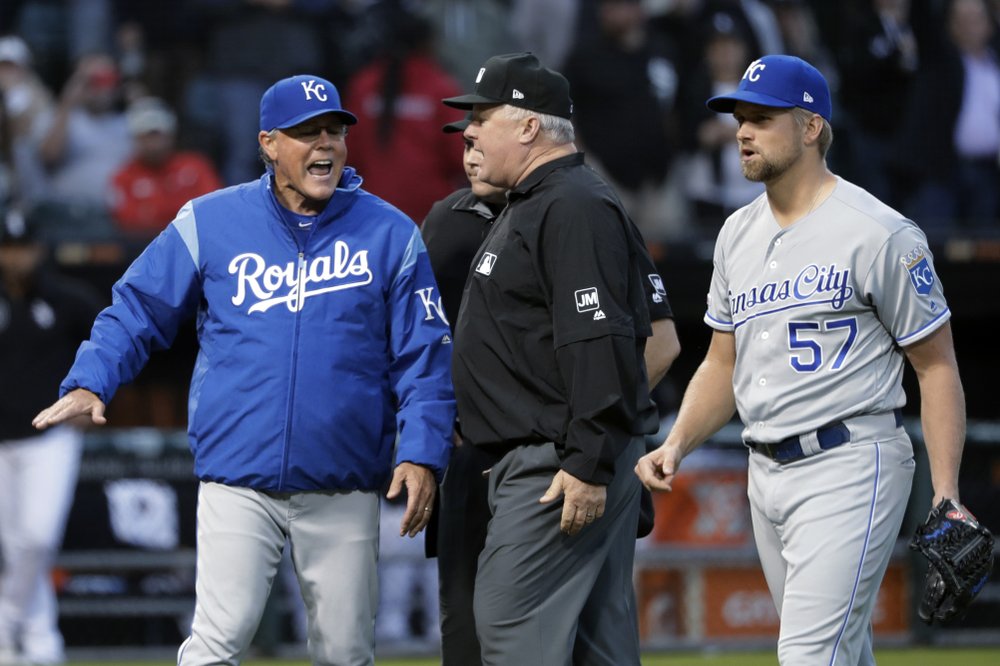 KANSAS CITY, Mo. (AP) — Ned Yost did something that few thought possible when he took over the Kansas City Royals in 2010: He not only built the organization into a winner but delivered the long-suffering organization its first World Series title in three decades.

Now, he’s leaving the next rebuilding job to someone else.

Yost announced Monday that he will be retiring at the end of the season, ending a nine-year tenure that included two American League pennants and that dramatic 2015 championship.

The announcement came on an off-day for the Royals, who lost 12-8 on Sunday to the AL Central-leading Twins to fall to 57-100 — their second consecutive season with at least 100 losses.

The Royals wrap up their season — and their skipper’s big league managerial career — with two games against the Braves beginning Tuesday night, then a weekend series at home against Minnesota.

The 65-year-old Yost, who has been on a year-to-year contract, will retire as the club’s career wins leader with 744 to date. He is the only manager to lead the Royals to back-to-back World Series, losing to the Giants in seven games in 2014 and beating the Mets in five the following year.

“I’ve thoroughly enjoyed my time here as your manager and will never forget the good and the hard times we had together as an organization and a fan base,” Yost said. “I will never forget the fact that you fans supported us through it all. Kansas City will always have a special place in my heart, and I look forward to rooting the Royals on to their next world championship very soon.”

Yost and general manager Dayton Moore are expected to address reporters on Tuesday.

Like many small-market clubs, the Royals were forced to gut their roster after their stunning run of success once their foundational stars became too expensive to keep. That began a massive rebuilding effort last year that has continued into this season.

Yet unlike last season, the Royals showed signs of hope this summer. Building blocks such as shortstop Adalberto Mondesi, third baseman Hunter Dozier and outfielder Jorge Soler — who broke the franchise record for homers in a season — gave Royals fans a reason to return to the ballpark, while a bevy of talented pitchers in the minor leagues offers more hope for the future.

“With the development of our young players and our returning veterans, I feel and hope the worst is behind us in this rebuilding phase of our organization,” Yost said. “My plan all along was to get us through the rough times then turn it over to a new manager to bring us the rest of the way.”

The Royals are not expected to move quickly in hiring Yost’s replacement, though bench coach Dale Sveum and special adviser Mike Matheny would provide their young core with a seamless transition.

Both of them have managerial experience, with Sveum replacing Yost after he was fired in Milwaukee and Matheny with the cross-state rival St. Louis Cardinals. And should Matheny get the nod, it would be remarkably similar to the circumstances in which Yost got the Kansas City job: He moved from an advisory role within the rebuilding Royals in 2010 to replace the fired Trey Hillman.

Yost began his career in baseball as a catcher when he was drafted out of Chabot College in 1974. He made his big league debut six years later for Milwaukee and went on to play parts of six seasons with the Brewers, Rangers and Expos before moving into coaching.

That’s where he ultimately made a name for himself.

After a long tenure on Bobby Cox’s staff in Atlanta, he was hired by the Brewers in 2003 and immediately set about rebuilding that franchise. He had them within sight of the postseason in 2008 when he was fired with just 12 games remaining in the regular season.

Sveum guided them into the playoffs, where they lost to Philadelphia in the divisional round.

Yost got a second chance to rebuild a franchise when he took over for Hillman in Kansas City. The once-proud organization had just one winning season since 1993, and had not reached the playoffs since beating the Cardinals to win the Royals’ only World Series title in 1985.

The Royals lost at least 90 games in each of Yost’s first two seasons, but with young stars such as Eric Hosmer and Mike Moustakas arriving, they had finally become competitive. They won 86 games the following year and finally broke through in 2014, advancing all the way to the World Series.

Their championship season in 2015 was celebrated by an estimated 800,000 people who turned out in downtown Kansas City for a parade, a surreal sight for those who had followed the Royals for years.

Yost did not say what he planned to do next, though he’s long enjoyed spending his offseasons hunting and fishing on his farm in Georgia. One of his best friends, the comedian Jeff Foxworthy, is his neighbor, and many of his other close friends live nearby.

TOP PHOTO: FILE – In this May 29, 2019, file photo, Kansas City Royals manager Ned Yost, left, appeals to umpire crew chief Bill Miller, center, after home plate umpire Mark Carlson ejected starting pitcher Glenn Sparkman (57) for hitting Chicago White Sox’s Tim Anderson with a pitch during the second inning of a baseball game, in Chicago. Royals manager Ned Yost will be retiring at the end of the season, a year in which his team lost 100 games. His decision was announced by the team Monday, Sept. 23, 2019. (AP Photo/Charles Rex Arbogast, File)

0
0   0
previous Injured Yelich still in the hunt for batting title
next Playoffs inevitable for Brewers, but where still up in air
Related Posts