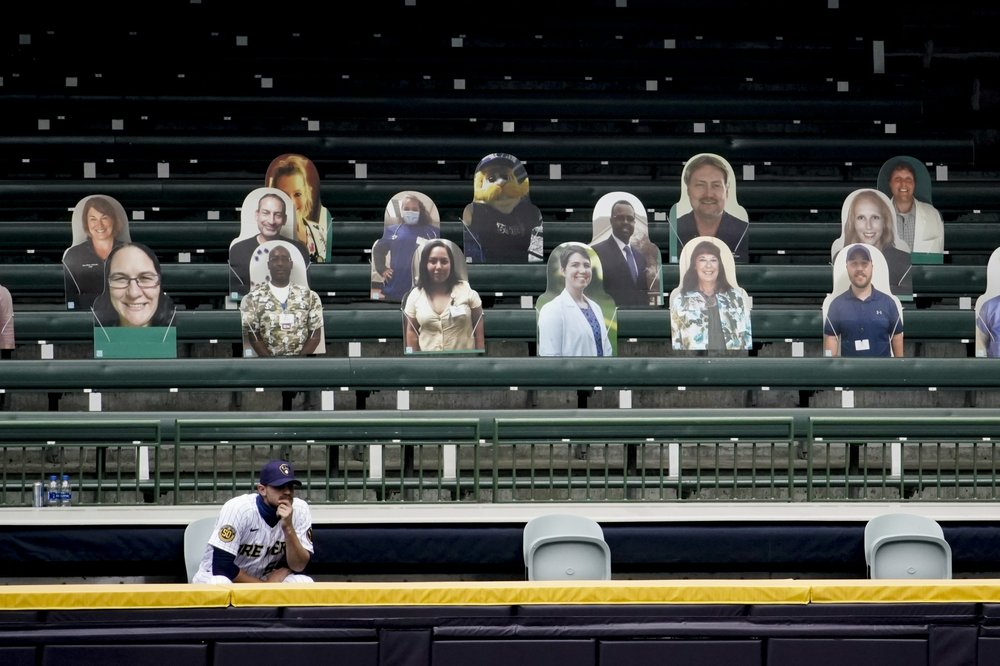 MILWAUKEE (AP) — Christian Yelich and Milwaukee’s slumping hitters finally busted out, enabling the Brewers to earn their first home victory of the year.

Yelich homered, tripled and drew a bases-loaded walk as the Brewers beat the Cincinnati Reds 9-3 on Sunday to avoid their first 0-5 home start since 1970, the franchise’s inaugural season in Milwaukee.

“I think every time we’ve played here, we’ve heard the same song every night: ‘Everything’s Gonna Be Alright,’” said Milwaukee first baseman Justin Smoak, referring to the Bob Marley tune that is actually titled ”Three Little Birds” and plays at Miller Park after Brewers losses. “I think last night after the game, a couple of us said, ‘I don’t want to hear that song again.’”

The Brewers avoided that fate — Daryl Hall and John Oates’ “You Make My Dreams” played after the game instead — because Smoak and the other struggling hitters in their lineup came through. Milwaukee entered the day hitting .210 but scored eight runs in its final three trips to the plate.

“It was good at-bats,” manager Craig Counsell said. “It was deep at-bats. It was long at-bats. I thought we really did it all day.”

Yelich had been hitting .114 but reached in four of his five plate appearances.

Smoak struck out in his first at-bat but then delivered three straight hits to break out of an 0-for-14 and 1-of-25 slump.

The switch-hitting Smoak, who went 3 for 5, delivered hits from both sides of the plate during a six-run outburst in the sixth inning. That rally included four walks, two with the bases loaded.

“When you’re struggling, you can try and do too much trying to swing your way out of it, but that’s not usually how it works,” Yelich said. “Usually, it’s guys putting together good at-bats and that’s how it comes.”

Milwaukee poured it on in the seventh with back-to-back homers from Keston Hiura and Yelich.

Hiura went 3 for 5 with two runs and two RBIs.

Cincinnati’s Jesse Winker was 3 for 4 with a homer, double and two RBIs.

The Reds were seeking their first sweep at Milwaukee since August 2009 and led 2-1 when starter Sonny Gray (3-1) remained in the game to open the sixth with his pitch count at 92.

Gray gave up three hits to the Brewers’ first four batters of the inning and left with the score tied and runners on the corners with one out. Michael Lorenzen replaced Gray and didn’t retire any of the four hitters he faced as the Brewers eventually built a 7-2 lead.

“It just kind of snowballed the wrong way for us in the sixth,” Gray said.

Eric Sogard walked to load the bases and Hiura singled home Mark Mathias to put the Brewers ahead. Lorenzen then walked Yelich with the bases loaded to extend Milwaukee’s lead to 4-2.

Lorenzen received a mound visit, then walked Logan Morrison to bring in one more run before exiting with the Brewers ahead 5-2. Smoak capped the rally with a two-run single off Cody Reed.

“As much success as Michael has had in his career, right now he’s struggling with his confidence,” Reds manager David Bell said. “We’re going to help him through it and keep looking for opportunities to allow him to pitch through it. I believe in him a ton. We all do. He’s going to get through it.”

Gray gave up six hits or fewer for a major league-record 37th consecutive start. He allowed six hits and four walks in 5 1/3 innings while striking out seven.

The last time Gray gave up more than six hits in a start was Aug. 1, 2018, when he was pitching for the New York Yankees and yielded seven runs in 2 2/3 innings of a 7-5 loss to Baltimore.

The Reds placed infielder Mike Moustakas on the 10-day injured list, retroactive to Thursday, with a bruised left quadriceps.

Reds reliever Pedro Strop and center fielder Nick Senzel have groin injuries. Bell said Strop “is trending toward some time off here” but Senzel should be ready to return by Tuesday.

The Reds have Monday off before beginning a two-game home series against Kansas City. Luis Castillo is the likely Cincinnati starter in the opener.

The Brewers stay home to begin a three-game series against Minnesota on Monday. The probable starter is Adrian Houser, who has allowed just one earned run over 12 innings through his first two starts. The Twins will start Randy Dobnak.

0
0   0
previous Packers’ Wagner savors chance to play for home-state team
next Column: Trash talk and then some trashy play for Koepka
Related Posts