Home NEWS Column: Trash talk and then some trashy play for Koepka 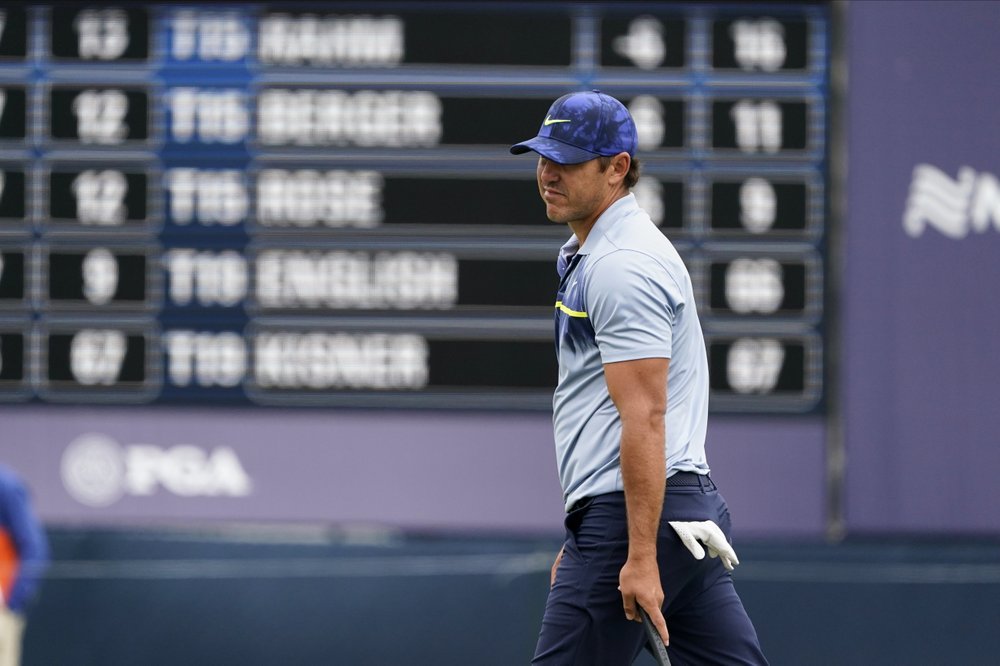 Maybe Brooks Koepka should have followed the old golf adage — as tired as it may be — and let his clubs do the talking.

At the very least, he should have given his driver a say.

A day after he raised eyebrows by suggesting some of his fellow players might not be up to the task of winning the PGA Championship, Koepka wasn’t either. He imploded on the front nine Sunday with three straight bogeys to lose his chance at a third straight title and fifth major overall.

The meltdown was startling for a player so full of confidence that he couldn’t help but talk some trash the night before. So was the decision that started it all, playing safe with an iron on the driveable par-4 seventh hole instead of trying to come from behind and make birdie — or even eagle — with a driver in his hand.

The iron shot went into a lousy lie in the deep rough and started the bogey string. When it was over, so were Koepka’s chances in a tournament won by 23-year-old Collin Morikawa, who didn’t lay up when it really mattered.

It wasn’t so much that Koepka didn’t win. With a ton of players in contention Sunday, anything was possible.

But he violated the unwritten rule of golf at the top level, especially when he noted final round favorite Dustin Johnson had only won one major. And that might stay with a lot more of his fellow players than anything that happened on a typical San Francisco day at Harding Park.

“Sort of hard to knock a guy (Johnson) that’s got 21 wins on the PGA Tour, which is three times what Brooks has,” Rory McIlroy said.

Koepka, of course, has never been lacking for confidence. His cockiness borders on arrogance and, while he mostly speaks the truth, that rubs some people the wrong way in the genteel game of golf.

Still, there’s no arguing with his success. He’s not only won back-to-back PGA Championships, but back-to-back U.S. Opens. Though he only has seven wins overall, he is almost always in contention on Sunday in majors, including the Masters last year when he finished second.

Koepka came into the week with the last two PGA trophies on his mantle, and quickly declared himself ready to win a third. For the better part of three rounds he seemed poised to do just that, despite a string of three bogeys Saturday that put him two shots behind going into the final round.

Standing in front of a disinfected microphone after his third round, Koepka sounded like the Wanamaker trophy was already his once again.

“I like my chances,” he said. “When I’ve been in this position before, I’ve capitalized. I don’t know, he’s (Johnson) won only one.”

Turns out Koepka was targeting the wrong player. Johnson was in contention much of the day but it was Morikawa — playing in only his second major — who showed experience doesn’t always matter when he pulled out a driver on No. 16 and knocked it to 7 feet on his way to an eagle that gave him the lead and, eventually, the tournament.

Koepka, meanwhile, was on his way to the airport after shrugging it off as just another day on the links.

The good news for Koepka is there’s another major just around the corner, the same U.S. Open he’s already won twice. The Masters will be in November, so there’s plenty of opportunity to add to his trophy case in the tournaments he gets up most for.

If he and Johnson aren’t best buddies anymore, well, he’s good with that, too. Too much was made of that friendship, he suggested earlier in the week, just because he and Johnson liked to work out together a few years ago.

Koepka will remain true to himself, and there’s nothing wrong with that. It’s how he approaches golf — and life — and for the most part it’s been a successful formula.

No apologies offered. No excuses given.

“You know, hey, it wasn’t meant to be,” he said. “Three in a row, you’re not really supposed to do two in a row looking at history but that’s all right. Got two more the rest of the season and we’ll figure it out from there.”

TOP PHOTO: Brooks Koepka reacts after missing a putt on the ninth hole during the final round of the PGA Championship golf tournament at TPC Harding Park Sunday, Aug. 9, 2020, in San Francisco. (AP Photo/Charlie Riedel)