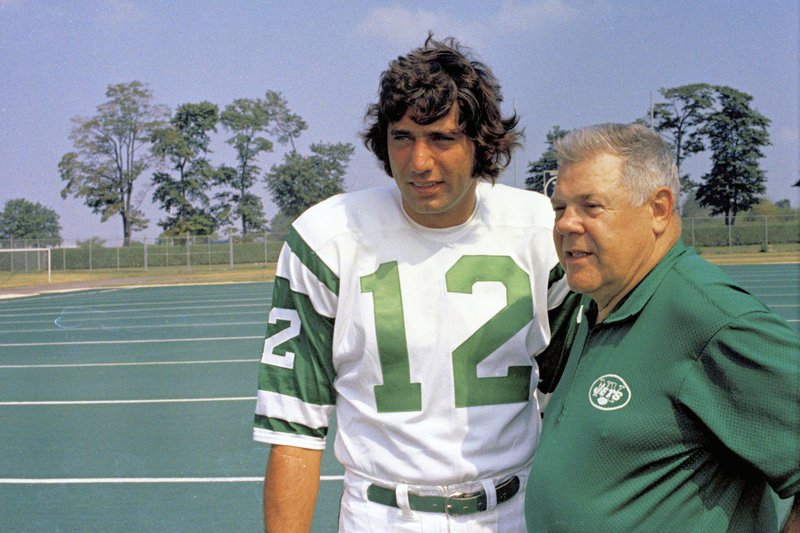 It was the prime-time football game that kicked off decades of must-see TV.

Broadway Joe and the New York Jets traveled to Cleveland to take on Leroy Kelly and the Browns in the 1970 season opener, with excited viewers around the United States glued to their sets — along with a club-record 85,763 at Municipal Stadium — to watch the first “Monday Night Football” game.

The Jets fell behind 21-7 on Homer Jones’ 94-yard kickoff return for a touchdown to open the second half, but Joe Namath’s 33-yard touchdown pass to George Sauer in the fourth quarter cut the Browns’ lead to three at 24-21.

Billy Andrews sealed the win for Cleveland by intercepting Namath late in the game and returning it 25 yards for the final score.

It was the first in what would become the longest-running sports series in TV history. The teams will meet again this Monday night at MetLife Stadium — this time with the Browns’ Baker Mayfield and Odell Beckham Jr. sharing the spotlight with the Jets’ Sam Darnold and Le’Veon Bell, and both teams looking to avoid starting the season 0-2.

Here’s a look at how that first “Monday Night Football” game affected each team in subsequent seasons:

The glory days of Namath and the Jets were already fading, two seasons after winning the franchise’s first — and, still, only — Super Bowl title.

There was plenty of optimism in 1970 after New York made the playoffs the previous season, but the loss to the Browns was an omen of disappointment to come.

The Jets rebounded the following week with a 31-21 victory over the Boston Patriots, but Namath was lost for the season in Week 5 when he broke his wrist against Baltimore in the teams’ first meeting since New York’s Super Bowl victory.

Al Woodall replaced Namath and helped snapped the Jets’ six-game losing streak with consecutive wins against the Los Angeles Rams, Boston and Minnesota. They then skidded to the end of the season with three straight losses.

Namath came back, but played in just 23 games over the next three seasons because of various injuries. The Jets went 17-25 during that span and didn’t get back to the playoffs until the 1981 season — four years after Namath retired following a one-season stint with the Rams.

That 11-season postseason drought is the longest in franchise history, with this current Jets squad second at eight years.

The Browns were coming off consecutive appearances in the NFL championship game, losing to the Colts in 1968 and the Vikings in 1969. There was lots of uncertainty about the future, though, as the merger between the NFL and AFL was completed and Cleveland moved to the newly formed AFC.

The win over the Jets on Monday night didn’t springboard the Browns to continued success. Cleveland opened the season 3-1, but scuffled to a 7-7 finish and failed to make the playoffs. It was also the final season for coach Blanton Collier, who retired.

Nick Skorich took over and guided the Browns back to the postseason the next two years while going 19-9 in that span. But Cleveland then went through several years of mediocrity while failing to reach the playoffs again until 1980 under Sam Rutigliano.

The Browns are still looking for their first Super Bowl appearance — joining the Jacksonville Jaguars, Detroit Lions and Houston Texans as the only active franchises to not make it to the NFL’s biggest game.

These days, Cleveland will take just making it to the playoffs, of course. The Browns’ 16-year postseason drought is the league’s active longest skid.

1979: The Jets tied it on Kevin Long’s 5-yard TD run with under a minute left, but Pat Leahy missed what would have been the go-ahead extra point. The Browns fumbled the ensuing kickoff and the Jets recovered, allowing Leahy to redeem himself by booting a go-ahead 21-yarder. But Brian Sipe rallied Cleveland down the field and Don Cockroft kicked a tying 35-yarder to send it to overtime. An interception of Matt Robinson by Oliver Davis gave the Browns the ball in the extra period, and Cockroft’s 27-yarder won it 25-22 for Cleveland.

1987: Another OT game, this time in the teams’ only postseason meeting. Freeman McNeil’s TD run gave the Jets a 10-point lead with just over four minutes left, but a late hit by Mark Gastineau on a third-down play kept the Browns alive. Bernie Kosar rallied Cleveland to tie it and send it to overtime. Mark Moseley missed a 23-yard field goal in the first overtime, but was good on his 27-yarder in the second OT to send the Browns to the AFC championship game with a 23-20 victory.

2002: The Jets took a 21-3 lead under Chad Pennington, then Tim Couch marched the Browns back in the second half. Phil Dawson kicked a 35-yard field goal to put Cleveland ahead 24-21 with 3:30 left, and Courtney Brown blocked John Hall’s 44-yard tying attempt in the closing seconds to seal it for the Browns.

2010: Moments after Nick Folk’s field goal put the Jets ahead by seven with 2:42 left, Colt McCoy rallied the Browns to a tying touchdown to send it to overtime. Appearing as though the game would finish in a tie, the Jets got the ball with 24 seconds left. Mark Sanchez connected with Santonio Holmes, who took the short pass 37 yards for a touchdown to give New York the 26-20 victory.

2018: The Jets grabbed a 14-0 lead on two touchdown runs by Isaiah Crowell, who celebrated the second against his former team by wiping his rear end with the football in the end zone. It was all downhill from there for New York. Rookie Baker Mayfield replaced injured starter Tyrod Taylor in the second quarter and dazzled in his NFL debut, leading the Browns to a 21-17 comeback victory that snapped Cleveland’s 19-game winless streak.

TOP PHOTO: FILE – This is an undated photo showing Joe Namath, left, quarterback for the New York Jets, talking with head coach Weeb Ewbank during football practice session in 1970. As part of its celebration of its 100th season, the NFL is designating a Game of the Week, each chosen to highlight a classic matchup. For Week 2, it is the Monday night game between the Browns and Jets. Joe Namath and Leroy Kelly were supposed to be the offensive stars in the inaugural game of pro football’s prime-time telecasts. But the guys who moved the ball best were the guys in the striped shirts. The guys in the striped shirts _ the officiating crew headed by Norm Schacter _ moved the ball so well that they played a key role in Cleveland’s 31-21 victory and may have played a key role in the important ratings battle against Liz, Dick and Lucy.(AP Photo/File)