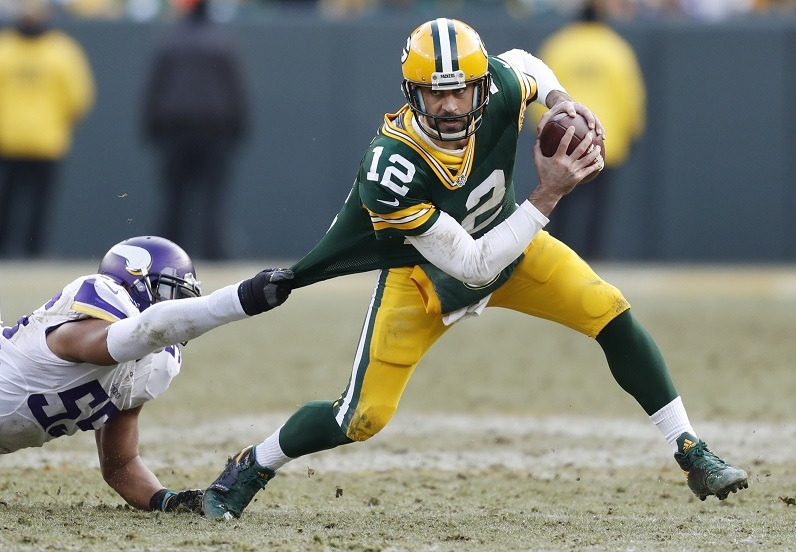 List of most indispensable player on each NFL team, and no, this guy isn’t on it

List of most indispensable player on each NFL team, and no, this guy isn’t on it

The Associated Press looks at the player deemed most indispensable by the AP sports writer covering each NFL team — quarterbacks need not apply — and what makes him so necessary (broken down by conference and division):
___

Harrison Smith, Minnesota: The sixth-year safety is the backbone of coach Mike Zimmer’s aggressive defense and one of the NFL’s most dominant units. Smith stands out with his versatility, able to roam in deep coverage, deliver hard hits over the middle, or blitz.

Matt Prater, Detroit: Yes, the kicker. The Lions have been an average team the past couple years, but Prater’s clutch kicking lifted them to a playoff berth last season and has them in the mix again this year. He had four game-winning kicks last season, a 58-yarder to force overtime in 2016 against Minnesota, and his 52-yarder beat Chicago this season in difficult conditions.

David Bakhtiari, Green Bay: The left tackle went to the Pro Bowl last year, and Bakhtiari is the man who protects Aaron Rodgers’ back, which is even more important if the quarterback returns this month.

Jordan Howard, Chicago: The running back has ranked among the NFL’s most productive since being drafted in the fifth round last year, and he’ll be the Bears’ biggest ally in developing quarterback Mitchell Trubisky.

Fletcher Cox, Philadelphia: The defensive tackle missed the fourth quarter of a game and the next game this season. In those five quarters, the Eagles allowed 48 points for an average of 9.6 points per 15 minutes. In all other games with him, they’ve allowed 3.7 points per quarter.

Ezekiel Elliott, Dallas: Enough said, though the Cowboys’ 1-3 record as he sits out his suspension has made Dallas’ playoff road very difficult, if not impossible. Elliott is due to return Christmas Eve against Seattle, and even he may not be able to save the Cowboys’ postseason hopes.

Trent Williams, Washington: The tough left tackle has missed three of the past six games with a severe knee injury, and Washington has struggled to give Kirk Cousins adequate time to throw or establish much of a running game without Williams.

Odell Beckham Jr., New York Giants: The wide receiver had the best three-season start in team history with 288 catches, 4,122 yards and 35 TDs — most in the NFL since the start of the 2014 season. Ankle injuries limited him to four games this season and one big play on a 48-yard TD, and the Giants have only seven big pass plays, two for TDs, this season.
___

Cam Jordan, New Orleans: The defensive end is an absolute physical specimen, strong enough to play the run effectively and fast enough in his seventh season at age 28 to be a menace with 10 sacks, 17 quarterback hits and six passes defended. The first-round pick in 2011 is the Saints’ defensive leader on and off the field.

Luke Kuechly, Carolina: The 2013 NFL Defensive Player of the Year is arguably the best middle linebacker in the game and a vital part of what the Panthers do on defense. When Kuechly isn’t playing — and he’s missed time with three concussions over the past three seasons — the Panthers aren’t the same team. He has great size, rarely misses a tackle, and outstanding speed to get from one side of the field to the other. He reads plays extremely well.

Alex Mack, Atlanta: When the Falcons made the three-time Pro Bowl center the NFL’s highest-paid center with an average salary of $9.5 million, Mack was the final piece to solidifying their offensive line. With Mack, the Falcons led the league in scoring and reached the Super Bowl.

Mike Evans, Tampa Bay: The Bucs are driven by the offense, and nobody has meant more than the big, strong receiver who commands double-teams and is the biggest red-zone threat, as well as most reliable and productive option on third down. Jameis Winston’s favorite target earned his first Pro Bowl slot last season.

Aaron Donald, L.A. Rams: The defensive end is putting together another All-Pro caliber season despite sitting out training camp and preseason in a contract dispute. Donald constantly clears space for teammates by drawing double-teams, but still gets loose for his own pressures, sacks and tackles for loss as the Rams’ most disruptive player on team.

Earl Thomas, Seattle: A lot of what the Seahawks do defensively rests on Thomas at safety patrolling all the space he covers. His uncommon sideline-to-sideline speed has allowed Seattle’s cornerbacks to be aggressive, knowing that Thomas usually covers any mistakes. His value became most notable last year when he missed the final month of the regular season and the playoffs due to a broken leg. Seattle was not the same team defensively and suffered.

David Johnson, Arizona: The running back broke his wrist in the opener and look what happened to the Cardinals. Their offense was built around the back who led the NFL in touchdowns (20) and yards from scrimmage (2,118) to start the season.

DeForest Buckner, San Francisco: The defensive lineman almost never comes off the field, stout in the middle against the run and pressuring the quarterback even if his sack numbers aren’t there. For a rebuilding team, Buckner provides a valuable building block.
___

Rob Gronkowski, New England: Gronk has been a force this season after missing the second half of 2016 following back surgery. He adopted Tom Brady’s strict diet habits and slimmed down. Gronkowski now has 55 catches for 849 yards and a team-high seven touchdowns.

LeSean McCoy, Buffalo: With the Bills’ offense based on the run, McCoy edges defensive tackle Kyle Williams as Buffalo’s most consistent threat. McCoy has 1,155 yards from scrimmage — 32 percent of the Bills’ total offense. He also touches the ball on nearly half the plays.

Demario Davis, New York Jets: The veteran linebacker is among the NFL’s top tacklers. Davis is the quarterback of Todd Bowles’ defense as New York’s middle linebacker and is having perhaps his best season after being reacquired by New York this offseason after a year in Cleveland.

Delanie Walker, Tennessee: Third in the NFL in catches among tight ends, the veteran is Marcus Mariota’s favorite target despite being double- and triple-teamed by defenses. Walker pulled in a 37-yard catch in Indianapolis with offensive coordinator Terry Robiskie counting eight defenders around the tight end on film.

Calais Campbell, Jacksonville: Possibly the best free-agent acquisition of 2017, the defensive end leads the AFC in sacks and is a big reason the Jaguars are in the playoff mix.

Jadeveon Clowney, Houston: Well, J.J. Watt has hardly played in almost two seasons, and the top overall pick in the 2014 draft is having perhaps the best season of his career after being slowed by injuries early in Houston. Clowney has fought through near-constant double teams with Watt and Whitney Mercilus out for the season, yet he leads the team with career highs in sacks (nine) and tackles for losses (18) to keep the defense afloat.

T.Y. Hilton, Indianapolis: The receiver’s value can be measured in pure numbers. In three wins this season, he has 19 catches for 505 yards and three TDs. In nine losses, Hilton has 22 receptions for 286 yards and one TD. Coincidence? Doubt it.

Antonio Brown, Pittsburgh: The perennial All-Pro has the most catches over any five-year span in NFL history. He is Ben Roethlisberger’s security blanket, and the trust between the two is so great it isn’t unusual for Roethlisberger to throw it into double or triple coverage to him.

Brandon Williams, Baltimore: The nose tackle clogs the middle and ties up a couple linemen, freeing linebacker C.J. Mosley to lead the team in tackles. The Ravens went 1-3 when he missed four games with an injured foot, and his value is why they gave him a five-year, $52.5 million contract in March rather than let him become a free agent.

A.J. Green, Cincinnati: Last season showed how much the wide receiver means to the Bengals. After five straight playoff appearances, with Green going to the Pro Bowl with more than 1,000 yards receiving each year, a hamstring injury cost Green at least six games. The Bengals won only six games without his production.

Tyreek Hill, Kansas City: The wide receiver is the Chiefs’ only big-play threat, and his versatility allowing him to line up at running back and as a threat on punt returns makes him even more crucial than tight end Travis Kelce.

Casey Hayward, L.A. Chargers: The cornerback has emerged as one of NFL’s best defensive players in absence of fellow starting cornerback Jason Verrett. Hayward was just the AFC’s defensive player of the month. He has four interceptions and constantly draws the toughest assignments.

Khalil Mack, Oakland: The Raiders have one of the NFL’s worst defenses. Now just think of how bad it would be without last year’s Defensive Player of the Year as a force against the run and an elite pass rusher despite being the focus of every opposing offense.

Chris Harris Jr., Denver: He is the heart of a Broncos’ defense that is not what it was two seasons ago in winning Super Bowl 50.