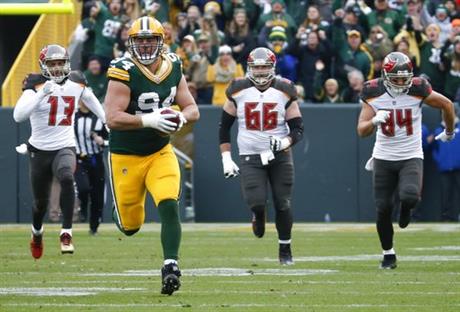 How fast is Packers’ Dean Lowry? He says not that fast. Could have fooled TB

How fast is Packers’ Dean Lowry? He says not that fast. Could have fooled TB

GREEN BAY, Wis. — Dean Lowry estimates that he could run a 40-yard dash in 4.8 seconds.

Watching him rumble down the field on a 62-yard fumble return for a touchdown might have felt like an eternity to fans at Lambeau Field.

Lowry’s score highlighted a solid effort for the Packers’ defense, and Green Bay’s offense relied on the running game to beat the Tampa Bay Buccaneers 26-20 in overtime on Sunday. The game ended on the opening possession of overtime with Aaron Jones’ 20-yard scoring run on his only carry.

Lowry’s touchdown was even more entertaining.

Lowry snatched the ball out of the air following a strip-sack of Jameis Winston by Kenny Clark. Seconds later, the 6-foot-6, 296-pound lineman was making a Lambeau leap.

“It was good to show it off a little bit,” Lowry joked about his speed. “I was definitely winded right afterward.”

The Packers (6-6) got seven sacks along with a blocked punt by Kyler Fackrell and kept their playoff hopes alive. They still trail NFC North-leading Minnesota by four games, but there is renewed optimism with the possibility of quarterback Aaron Rodgers returning from a collarbone injury in a couple weeks.

“When you can grind it out and do things a different way and your team is successful … we’re a better team today, not only because we won the game but how we won,” coach Mike McCarthy said.

Green Bay spoiled the return of quarterback Jameis Winston to the Buccaneers (4-8), whose playoff hopes are just about done.

Still, Winston refused to focus on anything but getting better for next week’s game against Detroit. The quarterback missed Tampa Bay’s three previous games with a shoulder injury.

Other notes and takeaways from Green Bay’s win:

The Packers had just 84 yards passing but wore down the Buccaneers on the ground. Rodgers’ replacement, Brett Hundley, had runs of 18 and 7 yards on the game-winning drive in overtime. If Green Bay can keep running the ball effectively, it may be able to stay in the playoff race until Rodgers returns to spice up the offense.

Hundley finished 13 of 22 for 84 yards, adding seven carries for 66 yards. Jamaal Williams ran for 113 yards and a touchdown on 21 carries.

Winston finished 21 of 32 for 270 yards and two touchdowns , including an 11-yard scoring pass to tight end Cameron Brate for a 20-17 lead with 6:02 left. But Winston had defenders in his face all day.

Winston refused to blame his offensive line, though there were a couple communication issues with center Evan Smith. He was a last-minute replacement after starter Joe Hawley was scratched with an illness. Two other starters on the line were placed on injured reserve earlier in the week.

“So I don’t think it’s right to be able to say that they did subpar when they overcame so much in this day,” Winston said.

The line did help Peyton Barber rush for 102 yards on 23 carries.

The Buccaneers had one last shot in regulation after Mason Crosby kicked a 22-yard field goal to tie the game at 20 with 2:01 left. But Winston’s 20-yard pass to Charles Sims was negated by an illegal block penalty on Smith that pushed the offense back to first-and-20 from its own 10. Tampa punted three plays later and never got the ball back.

The Packers believe they need to win their last four games to have a shot at the postseason. They face the winless Cleveland Browns next week, and with a win, Rodgers could return to a 7-6 team the following week at Carolina. Rodgers returned to practice on Saturday for the first time since getting hurt on Oct. 15 at Minnesota.

Packers linebacker Jake Ryan departed in the fourth quarter with a neck injury. Also, line judge Tom Stephan had to be helped onto a cart that took him off the field after he got hurt on a third-down play with 11:08 left in the first quarter.

0
0   0
previous Should Alabama have gotten the nod over Ohio St.?
next Keenum better than Ryan as Vikings win eighth straight
Related Posts