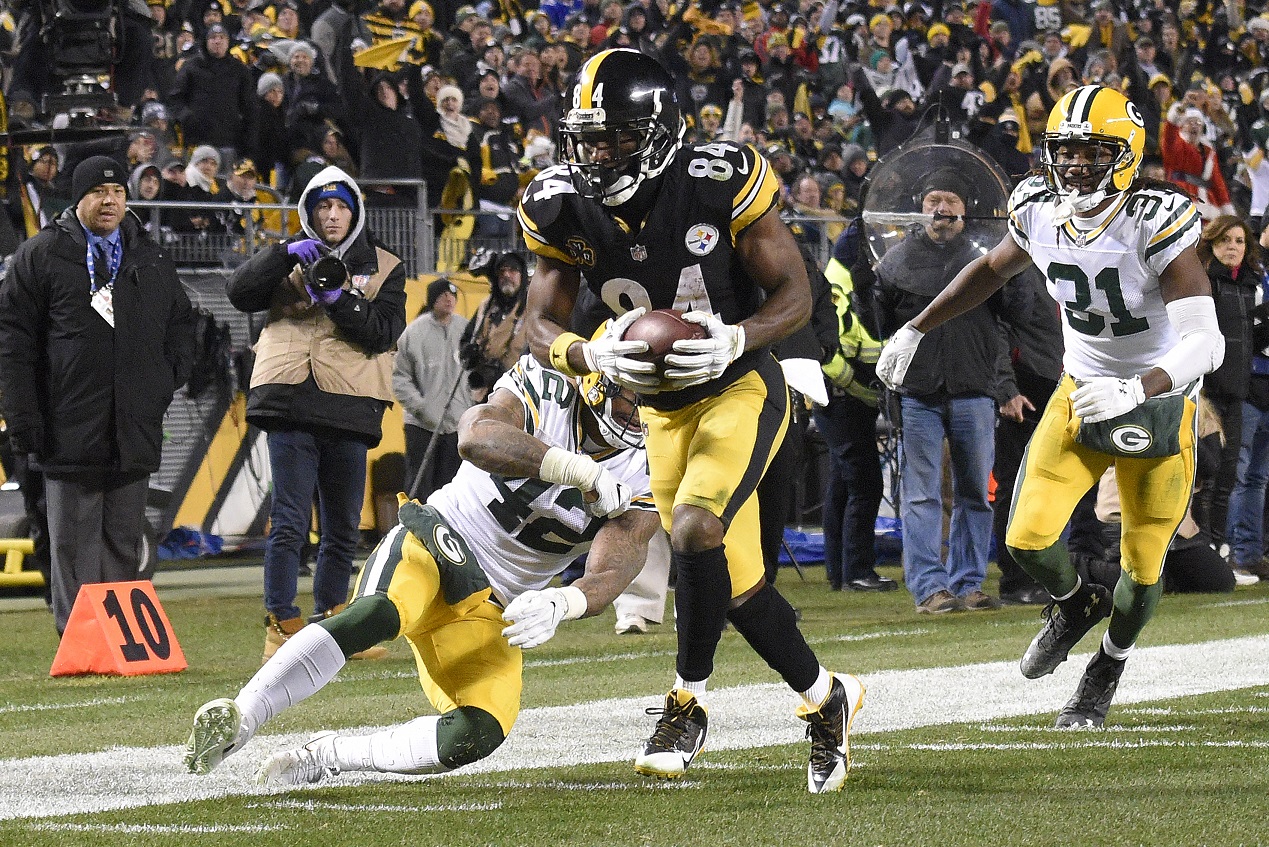 PITTSBURGH — Chris Boswell kicked a career-long 53-yard field goal as time expired to give the Pittsburgh Steelers a 31-28 victory over the Green Bay Packers on Sunday night.

The Steelers (9-2) won their sixth straight thanks in large part to wide receiver Antonio Brown. Brown caught 10 passes for 169 yards and two scores and also made a pair of catches on the deciding drive, including a 23-yard grab on the sideline that put the Steelers into Green Bay territory.

Brown added a 14-yard reception on the next play. Two snaps, later Boswell drilled the winner and his teammates mobbed him at midfield.

Brett Hundley completed 17 of 26 for 245 yards and three touchdowns for Green Bay (5-6) in his best start since taking over for injured Aaron Rodgers. Jamaal William ran for 66 yards, including a 4-yard leap into the end zone with 2:02 that tied it at 28.

The teams traded punts before Pittsburgh took over at its 30 with 17 seconds to go. It was just enough time for Roethlisberger and Brown to push the Steelers within the fringe of Boswell’s range as Pittsburgh kept pace with New England for the AFC’s best record.

The Steelers have repeatedly stressed the importance of staying focused on the work directly in front of them instead of peeking down the road to a showdown with the Patriots month.

Yet for the second time in three weeks, Pittsburgh seemed caught off guard as overwhelming favorites against an injury marred team starting a backup quarterback. Pittsburgh struggled against Jacoby Brissett and Indianapolis on Nov. 12, surrendering a pair of long touchdown passes before rallying to win on the final snap.

It was much of the same under the lights at Heinz Field, as Hundley put together the most promising start of his young career.

After Roethlisberger quickly took Pittsburgh down the field for a touchdown on the game’s opening drive, Hundley responded by finding a wide open Randall Cobb for a 39-yard touchdown strike, the first time in 28 games the Steelers have allowed an opponent to reach the end zone on their first possession.

Williams turned a flip into a weaving 54-yard touchdown reception later in the first quarter and when Adams streaked for a 55-yard score less than 3 minutes into the second half, Green Bay was poised to pull off the upset.

A curious decision by Pittsburgh-born Mike McCarthy gave the Steelers some needed momentum. Up a touchdown, the Green Bay coach opted to have Mason Crosby attempt a 57-yard field goal into the always uncertain wins. Crosby’s kick never had a chance and Pittsburgh responded.

Roethlisberger found Brown for a 1-yard touchdown to even it at 21 then threw another rainbow to Brown for a 33-yard score that put Pittsburgh ahead 28-21.

Hundley then channeled Rodgers, taking the Packers 77 yards in 12 plays, the last Williams’ dive into the end zone that tied it for the third time.

Packers: LB Clay Matthews missed his first game of the season due to a groin injury. RB Ty Montgomery was also out with a rib issue.

Steelers: Rookie WR JuJu Smith-Schuster sat with a hamstring problem. Bryant started in Smith-Schuster’s place and had his most productive game since returning from a year-long drug suspension that cost him the entire 2016 season.

Packers: Host Tampa Bay next Sunday. Green Bay is 0-3 at home since Rogers was injured.