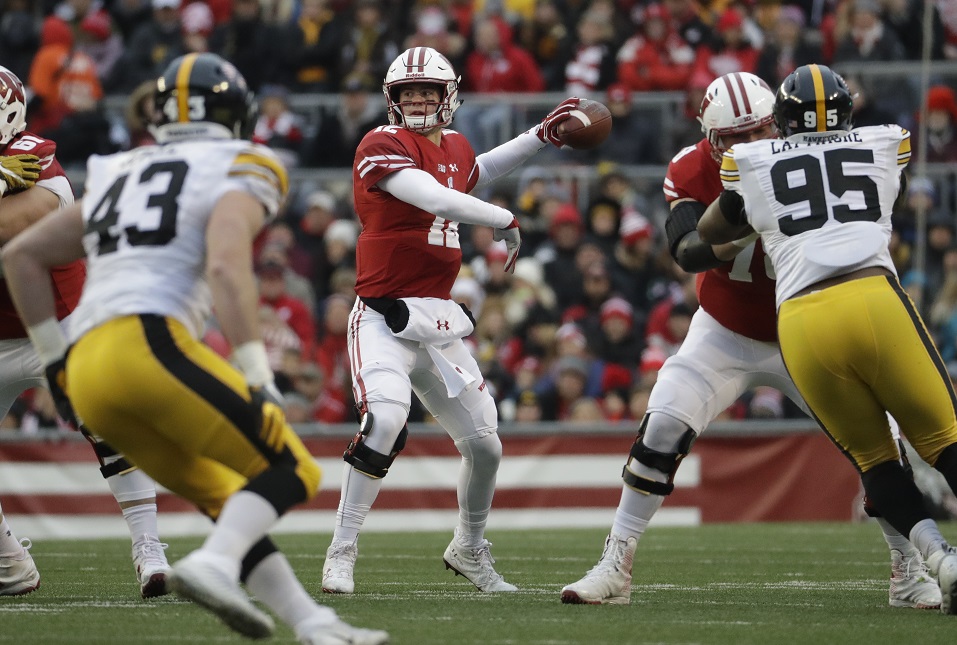 Hornibrook keeps poise in QB spotlight for No. 5 Wisconsin

Hornibrook keeps poise in QB spotlight for No. 5 Wisconsin

MADISON, Wis. — As the middle child in his family, Alex Hornibrook grew up with a lot of commotion in the house.

It was great practice for blocking out the noise that comes with being the quarterback for an undefeated team with playoff aspirations.

Through the highs and lows of the season — all the questions about the interceptions and praise for clutch throws — Hornibrook has maintained his composure for No. 5 Wisconsin (11-0, 8-0 Big Ten, No. 5 CFP).

“I’m not even sure if I ever had that taught to me,” Hornibrook said about his even-keeled temper. “It was just kind of how I was.”

The Badgers wrap up regular-season play on Saturday at Minnesota in the annual rivalry game for Paul Bunyan’s Axe .

He’s not solely to blame for all the picks. But his play in the third quarter of a 24-10 win over Michigan encapsulated in part his season.

There was the groan-inducing interception thrown into double coverage in the middle of the field, deep in Wisconsin territory. The Badgers’ defense cleaned up that mistake by holding Michigan to a field goal.

The crest arrived late in the third quarter with key passes on two touchdown drives that put away the game for Wisconsin.

“He’s continuing to grow at that position. I thought he was really good in a lot of it in the last game, and we’re going to be tested,” coach Paul Chryst said. “Minnesota does a really nice job of pressuring the quarterback and we’ve got to build on that.”

The first came on a dart of a 24-yard pass into a tight window to A.J. Taylor for the go-ahead touchdown.

Later in the quarter it was a perfectly lofted ball to Danny Davis, who made a one-handed grab with a defender draped on him for a 27-yard gain to the Michigan 32. It set up receiver Kendric Pryor’s 32-yard end-around for a touchdown for a two-score lead.

“Alex does a good job of being in the moment,” Chryst said. “And those next couple drives, he gave guys a chance to make plays. … Certainly, those were big.”

Hornibrook displayed good pocket awareness against the athletic Michigan defense. Wisconsin’s offensive line doesn’t often get beaten, but the Wolverines controlled the line of scrimmage early in the game before the Badgers began imposing their might in the second half.

On the touchdown throw to Taylor, Hornibrook shuffled a couple steps up in the pocket before firing the pass. It was a textbook play all around.

“It’s always different whether you’re in practice … than when you get in a game, finding the balance between staying in the pocket and taking a couple hits to get the ball out of your hands versus finding some time,” Hornibrook said. “I think I’m still trying to find that balance. I’ve got some room to improve on that.”

It helps when Hornibrook can also hand the ball off to Big Ten leading rusher Jonathan Taylor. And Hornibrook has played well in the red zone, where he is 21 of 31 for 217 yards with 14 touchdowns and one interception this year.

Whether he’s coming off a good throw or a bad pick, Hornibrook remains outwardly calm. A National Honor Society student in high school, Hornibrook traces the demeanor back to those days growing up with his brother and sister.

“Even in my family it was always my brother who was the one who was always excited. My sister was sometimes, too,” Hornibrook said. “They’d be fighting it out. I’d always be sitting there quiet.”

0
0   0
previous Grayson Allen drops 37 as No. 1 Duke edges out No. 2 Michigan State
next Packers in similar spot a year after "run-the-table" streak
Related Posts