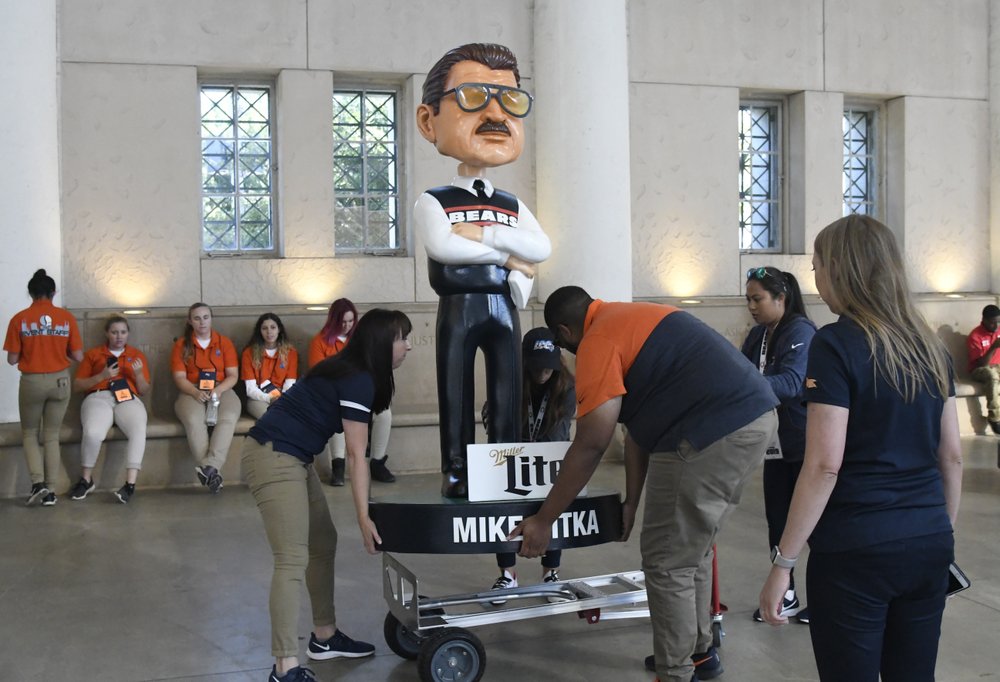 CHICAGO (AP) — Doug Gottfred stopped to take a picture of his son, Owen, on their way to Soldier Field. Wearing a No. 29 Tarik Cohen jersey, Owen stood tall while his dad used the city skyline for a postcard-like backdrop.

It was the first Chicago Bears game for Owen, who plays linebacker and running back for his flag football team.

The NFL opened its 100th season Thursday night in a city that follows football with a fevered intensity.

The league threw a birthday party that included a free fan festival and concert and culminated with one of its biggest rivalries: a 10-3 victory for Aaron Rodgers and the Green Bay Packers against Khalil Mack and the Bears.

The beginning of the regular season comes with the league still dogged by questions about safety and other issues.

Indianapolis Colts quarterback Andrew Luck retired last month at age 29, stripped of his love for the game by years of injuries. Officiating remains a big concern — just ask New Orleans about what happened in the NFC championship against the Los Angeles Rams — and legalized sports gambling is moving into football cities all over the country.

But even with those potential storm clouds, nothing captures the attention of U.S. sports fans like the NFL.

“There’s nothing like it, in any other sport,” said Bryan Batassa of Kenosha, Wisconsin. “Football, just coming down and seeing everybody together and enjoying the game.”

Batassa was deep in enemy territory for Green Bay’s first game. He wore a Packers shirt and hat, and his wife, Sandra, donned a Packers jacket and hat, but they said they had been treated well so far.

“Not as much of a fan as my husband here,” Sandra said. “But it’s always fun to just be part of the crowd and hang out and yell and cheer. It’s always a family event.”

In the age of Netflix and other streaming services, NFL games dominate TV ratings every year. Fantasy football has become an annual pastime in homes and offices across the country.

While stars such as Tom Brady and Drew Brees are nearing the end of their careers, a promising young crop of quarterbacks that includes NFL MVP Patrick Mahomes and Baker Mayfield appear ready to step into the limelight.

The popularity of the NFL was perhaps best illustrated by sports talk radio this summer in Chicago, where the Bears’ situation at kicker — yes, kicker — was a frequent topic of conversation months after Cody Parkey came up empty on a potential game-winning field goal in a playoff loss to Philadelphia.

“I like the action, the drama,” said Harry Lutz, a 50-year-old accountant from New Jersey.

“I want to see the quarterback leave on crutches,” said his brother, Scott, 45.

Harry’s wife, Donna, got him two tickets to the opener as a birthday present. Harry was a Bears fan growing up, watching highlights of Walter Payton, Dick Butkus and Gale Sayers via NFL Films.

“The Bears are known for defense, but the game has changed,” he said. “But I always thought the snot-knocking hits were the best part of the game, not the 2-yard passes.”

Harry and Scott stood on the steps of the neighboring Field Museum, taking in Soldier Field like it was one of the great wonders of the world. It was Harry’s first trip to the longtime home of his favorite NFL team.

“Gambling, fantasy football, it’s once a week,” Harry said, ticking off what he felt were the reasons behind the league’s success. “Unlike every other sport, it’s once a week, so you plan your weekends around it. Baseball, six days a week, who’s got time? Same thing in basketball and hockey.”

TOP PHOTO: A large bobblehead of Mike Ditka is seen at Soldier Field before an NFL football game between the Green Bay Packers and the Chicago Bears Thursday, Sept. 5, 2019, in Chicago. (AP Photo/David Banks)