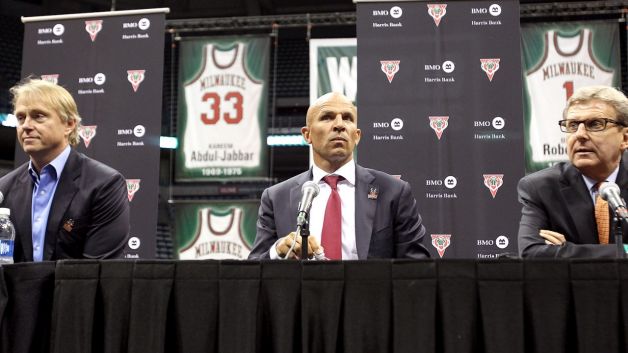 Who replaces Kidd as head coach for the Bucks?

The Bucks finally said enough is enough and fired head coach Jason Kidd after the team fell to 23-22 on the season, enduring a brutal stretch that saw the team lose four of five games and fall to eighth in the Eastern Conference.

Is Jason Kidd the only thing wrong in Milwaukee this year? No. But was he culpable enough in the underwhelming start to a season that was supposed to be the Bucks coming out party to a national audience with a deep playoff run? Yes. Is that enough to get you fired? Apparently so.

Now the Bucks have some tough questions to ask, like ‘Who the heck is going to be their next head coach?,’ ‘What to do with the rest of the season which is still very much up for grabs?,’ and ‘Does this mean the team could be looking shake things up further with player movements?’

All of these questions, and many more, are likely to be answered in fairly short order but for the moment I’d like to talk about some of the coaches that just might fit with the young and talented, albeit, disciplined Bucks roster.

At just 43 years old, David Fizdale brings youth, experience and toughness to a Bucks team that desperately needs it. Fizdale cut his teeth with the Miami Heat as an associate head coach under Erik Spoelstra from 2008-16, winning two championships with Lebron James and company along the way.

When Fizdale moved on to the Memphis Grizzlies in the 2016-17 season he promptly led the team to a 43-39 record and a playoff birth in the brutally tough Western Conference.

This season Fizdale was unceremoniously fired by the Grizzlies after an underwhelming 7-12 start, but star point guard Mike Conley Jr. was ruled out for the entire season and major shifts were no doubt coming down the pike. Since the departure of Fizdale, however, the Grizz have only won nine games and currently sit at 16-29, behind the Phoenix Suns at 13th in the conference.

Analysis: The Bucks NEED to make a play for Fizdale, he has the tools, energy and toughness to whip a young team in shape and show them how to win on the highest level.

Remember David Blatt? He was that guy James didn’t like playing for that helped the Cavs to a 53-29 in 2015 record and their first NBA Finals appearance since LBJ bolted for South Beach. He also had the team off to a modestly stellar, if not Lebron-worthy, 30-11 record in 2016 before “The King” decided he wanted Ty Lue to coach the team and had Blatt fired.

While Blatt’s not going to be president of the Lebron James fan club anytime soon, he still possesses some major coaching chops and might just be the perfect fit for the Bucks whose main star shares a “European Connection”.

When Blatt got fired by the Cavs he quickly picked up another gig in Europe where he was named as the new head coach for Darüşşafaka of the Turkish Super League and the EuroLeague so he’s not unemployed … BUT would a return the U.S. and a chance to coach an absolute freak of nature in Giannis Antetokounmpo, in the Central Division be enough to lure Blatt back to the states?

Blast from the past: George Karl

Ok, so George Karl is the oldest, and possibly least likely to land the Bucks job assuming he’d even be interested. At 66 Karl certainly doesn’t “need” to coach, and whether or not he’d still relate to today’s NBA player remains to be seen.

What should not be overlooked, however, is just how good of a coach Karl is. In his illustrious career Karl won 1,175 games, including 205 with the Bucks. Karl’s last coaching stop was the 2015-16 season with the Sacramento Kings so it goes without saying there wasn’t much winning there. One of the reasons for his departure was most certainly his sour relationship with superstar center Demarcus Cousins, who the Kings eventually traded to the New Orleans Pelicans.

When Karl was the coach for the Bucks from 1998-2003, the Bucks were a good, tough, physical, fun basketball team to watch. Stars like Ray Allen, Glenn Robinson, Vin Baker, Sam Cassell, Michael Redd, all played and thrived under Karl so would it be so out of the question to imagine a scenario where he comes back and revives some of the Bucks better years?

Analysis: I think Karl, if he wanted to coach, would be a good choice as Shepard of a young team into a bright future. The real issue here goes back to his age and if he’d be willing or able to stick with a team long enough to see it through. Reserve this for a back-up play.

0
0   0
previous The Bucks need to trade for DeAndre Jordan now, even at the expense Jabari Parker.
next How the Cavs just helped the Lakers quest to land Lebron
Related Posts