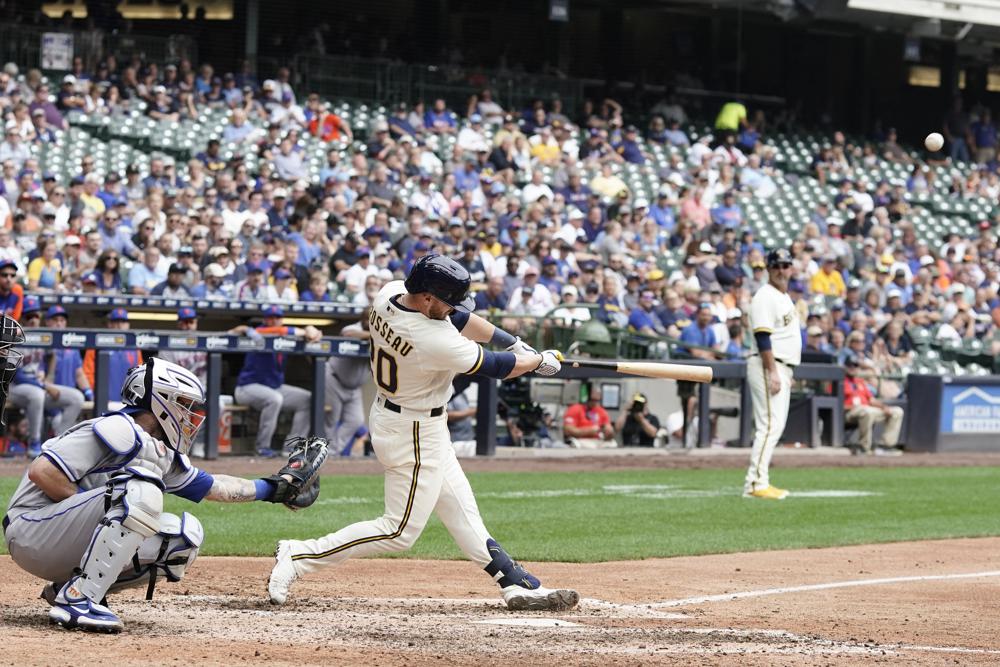 MILWAUKEE (AP) — Pinch-hitter Mike Brosseau greeted Drew Smith with a grand slam in the pitcher’s return from two months on the injured list, and the New York Mets squandered a chance to boost their NL East lead with a 6-0 loss to the Milwaukee Brewers on Wednesday.

Willy Adames hit a go-ahead home run in the sixth against Taijuan Walker, his fifth homer in 10 games and 31st this season, and the Brewers (79-70) closed within two games of Philadelphia (80-67) for the third and final wild-card berth. The Phillies played later Wednesday.

The Mets (95-56), already assured of at least a wild card, maintained a one-game NL East lead over Atlanta (93-56), whose five-game winning streak ended with a 3-2 loss at Washington.

Mark Canha was hit by pitches twice and Luis Guillorme once. Guillorme was struck on the right foot by a Jake Cousins slider in the ninth, the big league record 106th hiit batter of the season for New York. That topped the 105 by last year’s Cincinnati Reds, and Mets manager Buck Showalter signaled for the ball.

Mets center fielder Brandon Nimmo hurt his left quadriceps while stealing second base and left after the first inning. Left fielder Jeff McNeil banged up his right wrist against the chain-link fence in a failed attempt to catch Brosseau’s drive.

David Peterson loaded the bases with a two-out intentional walk to Adames, Brosseau was announced to hit for Rowdy Tellez and Smith relieved in his first big league appearance since July 24 after recovering from a lat strain.

Smith got ahead 0-2, and Brosseau homered on a hanging slider. He is 9 for 15 with three homers as a pinch hitter this season.

Brewers: Gott was activated from the 15-day IL after missing more than a month with a strained right forearm.