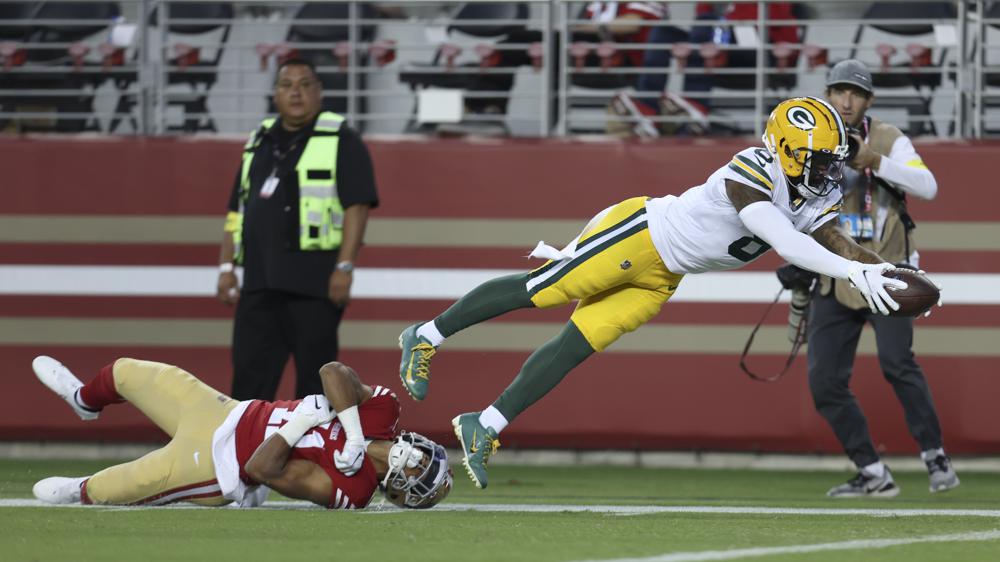 Rodgers had a 22-yard touchdown catch and a 50-yard kickoff return Friday in a 28-21 preseason loss to the San Francisco 49ers. On his touchdown, Rodgers caught Danny Etling’s pass around the line of scrimmage and raced down the left sideline before diving into the end zone.

Last year, Rodgers had no touchdowns and didn’t have a gain from scrimmage of more than 19 yards or a return of more than 27 yards.

“That definitely helped my confidence, making that first touchdown in the league,” said Rodgers, the son of Baltimore Ravens wide receivers coach and former University of Tennessee quarterback Tee Martin.

“That’s really what I’ve been telling myself. I just needed to feel it once just to know what it felt like to make a big play to turn the team up and to solidify myself like that, and it felt good.”

The Packers believed Rodgers was capable of those types of plays last season when they selected the former Clemson receiver in the third round.

Green Bay sent the No. 92 and No. 135 overall picks in the 2021 draft to the Tennessee Titans for the right to take Rodgers at No. 85. The idea was that Rodgers could emerge as the slot receiver the Packers had been missing since Randall Cobb’s departure after the 2018 season.

The Packers instead got Cobb back at the start of training camp last year.

With Cobb ahead of him on the depth chart, Rodgers was on the field for less than 10% of the Packers’ offensive snaps and caught just four passes for 45 yards. He averaged 18.1 yards on 11 kickoff returns and 8.3 yards on eight punt returns.

Rodgers always had plenty of motivation because of what his father accomplished as a player. A tough rookie season gave him even more incentive.

“Being who my dad is of course, growing up in Knoxville where he won a national championship, I always had a chip on my shoulder for that,” Rodgers said. “So now, it’s just a different team, a different process.”

Rodgers had shown his drive during his college career when he started playing again less than six months after undergoing surgery for a torn anterior cruciate ligament. He approached this offseason with a similar tenacity.

Rodgers says he weighed 218 pounds to start offseason preparation but got down to 202 just before training camp. The lighter Rodgers wants to prove he’s ready for a heavier workload.

Green Bay’s preseason opener showcased how the weight loss had improved Rodgers’ explosiveness. The experiences he got in practice last year helped his decisiveness.

“I can run for a longer time and not feel tired and not feel tight,” Rodgers said. “I can go out there and really just run all day, and that’s what you want to be.”

While Rodgers was raised in Knoxville, Cobb is from nearby Alcoa. Cobb had mentored Rodgers long before they became teammates. Cobb expects Rodgers to benefit from what he went through last year.

“He had growing pains and we all go through it,” Cobb said at the start of training camp. “We all have those moments and things happen throughout our careers and throughout our lives and it’s adversity. He’s faced a lot of adversity in his life and overcame it. I don’t expect it to be different on the football field.”

The trade of two-time All-Pro receiver Davante Adams to the Las Vegas Raiders creates more chances for all of Green Bay’s receivers, though plenty of guys are competing for playing time.

Rodgers showed Friday he’s ready for more opportunities both on offense and special teams. He wants to start producing more of those big gains he delivered regularly at Clemson.

“Hopefully I get a chance to make more plays like that,” Rodgers said. “I’ve made them before, so now I feel comfortable out there.”